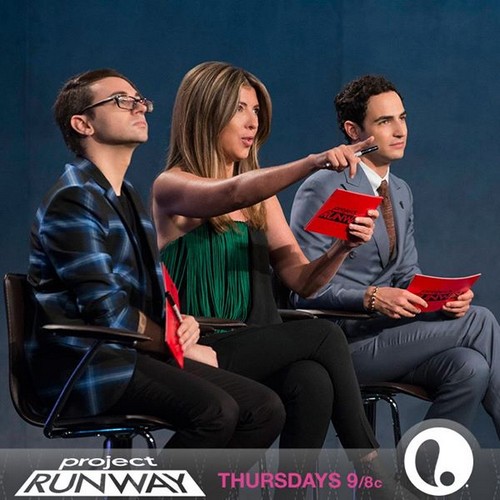 Tonight on Lifetime Emmy Award winning Tim Gunn’s Project Runway returns with an all new Thursday October 2, season 13 episode 11 called, “Lexus Lux.” On tonight’s episode each of the designers must find their muse on the streets of New York.

On last week’s episode the clothiers sought their muse in the form of a complete stranger found on the streets of New York City. Here, they had to convince the muses to undergo makeovers while creating looks for them. Guest judges: model Asha Leo and actress Michelle Monaghan. Did you watch the last episode? If you missed it, we have a full and detailed recap right here for you.

On tonight’s episode the designers drive Lexus vehicles in their quest to track down vintage and unique materials at flea markets, garage sales and storage facilities. Season 4 winner Christian Siriano is the guest judge.

Tonight’s episode is going to be another drama packed one, which you won’t want to miss. So be sure to tune in for our live coverage of Lifetime′s Project Runway season 13 episode 11 at 9PM EST! While you wait for our recap, hit the comments and let us know how excited you are about the new episode of Project Runway tonight.

Tonight’s episode of Project Runway kicks off with the remaining designers learning their next challenge. Tim Gunn takes them to a storage unit center where they will bid on each locker with their partner to find items to create their next design. Amanda and Kini purchase a locker full of junk because Amanda wants the psychedelic Yedi poster she sees hanging in it. Char and Sean buy a completely empty locker with one dresser in it because they are certain that it has clothes in the dresser.

After the bidding is over, the design teams have thirty minutes to go through their locker sand bring anything they want back to the work room. Char and Alexander are lucky because the dresser they purchased is full of fabric. Emily and Korina decide to take a chair back to the work-room so that they can use the upholstery. Tim Gunn reminds them that this is a fashion challenge, and not a costume jacket.

Char and Sean get to work and she decides to work on a bomber jacket. Amanda and Kini are in trouble, they don’t have half as much fabric as the other teams. They are making a skirt out of deflated soccer balls. Emily is working on a structured vest out of the fabric from the arm chair. Sean is annoyed because his partner Char needs constant help, and he can’t work on anything else because he is doing everything for her. Korina feels bad for Sean because Char is bringing him down.

It’s Day #2 of the challenge and the designers head back to the work room. Kini and Amanda are confident that they “can’t lose” and think that they are ahead of the game. Tim Gunn arrives and says that he has a “little twist.” The teams are already creating two designs, but Tim announces that now they have to add a third look, that matches the first two designs. For the third look they will be allowed to go to Mood and purchase fabric for their third design.

After their trip to the fabric store, Tim Gunn stops by the design room to critique their designs so far, he is not happy with the coat that Korina and Emily made from the chair upholstery, and he says it still looks like a chair and reminds him of Spongebob Squarepants. Tim Gunn likes Sean’s design, but he is concerned because Char’s design doesn’t really mesh well with her partner’s. Amanda and Kini share their designs with Tim, and he thinks it is too much. He says their mannequin looks like a “teenage hooker.” He is afraid that they are looking like amateur hour. Kini is shocked, he has never received such a harsh critique from Tim before.

Kini and Amanda begin panicking and decide to scrap half of their designs and change their soccer ball skirt in to a full dress. They make another skirt for their second design out of a tablecloth. The models arrive for their fittings, and Kini and Amanda only have one outfit ready to try on their models. Sean has a slight problem with his model when he realizes that the skirt is way too low and now their design looks like a teenage hooker. Meanwhile, Emily and Korina brag to their models that they are going to win this competition, hands down.

It’s day #3 and the final day of this challenge. Tim Gunn arrives and tells the designers to finish up their outfits because in an hour they will have to go to the salon with their models to pick out their hair and make-up. Sean and Char’s models aren’t exactly thrilled with their designs, they literally can’t even walk in Sean’s lamp-shade dress. After getting their model’s hair and make-up done, Tim Gunn arrives and says that it is time to head down to the run-way. The designers take their seats at the cat-walk and the judges take their chairs. The models begin prancing down the runway in the designer’s outfits, and it is a bling runway show, so the judges have no idea which design belong to which designer.

After the runway show is over Amanda and Kini take the stage with their models. They explain that they had very little fabric, so they had to go with an “American Pop Star in Tokya” look. The judges are shocked that they managed to make a dress out of a soccer ball and an ottoman. Heidi says that they are by far the most creative group today. Next up is Char and Sean, they explain that they were going for a sleek sportswear look. They love Sean’s coat, but they are unimpressed with the lamp shape dress. They think that the outfit that Char created is “hoochy” and looks like something you would wear on a walk of shame. Heidi thinks that Char and Sean played it safe and their designs are unexciting. They are happy that their dresses are cohesive and blend well together. The judges roast Emily and Korina’s designs, and tell Korina that she had done a Southwest theme way too many times. Korina throws Sean and Char under the bus and point out that at least their models can walk down the runway and don’t have to trip over a lampshade.

After careful consideration, the judges are ready to announce the winners of the competition. They call the designers back to the runway, and Heidi announces that Amanda and Kini’s design were by far the best and Kini is the winner, they excuse them from the runway. Next, Heidi reveals that Emily and Sean are both safe and they can leave the runway. Char and Korina are in the bottom two. Heidi gives them both one hour to create a new look and convince them that they should stay here. Heidi sends them back to the work-room and tells them to work with all of the scraps from previous challenges, and their partner can help them.

Char, Sean, Korina, and Emily rush back to the workroom to throw together a new dress. Char decides to work with a blue jersey knit dress that is already half made, Korina and Emily get to work on a patterned dress. Korina starts ranting that it is “bullshit she has to compete against someone who has already been eliminated.” Emily thinks that Korina is being way too negative and is crossing lines.

Tim Gunn arrives and tells Korina and Char that they are out of time and their models have to hit the runway. Heidi gushes that she is impressed with Char’s dress, they say that it is even better than the ones in her collection. Korina is upset, and confesses to the judges that she hates her design. The judges reassure her that she did the best she could in the time allotted.

It’s time for the judges to reveal who is going home this week. Heidi announces that Char is safe, and Korina is officially eliminated from Project Runway.