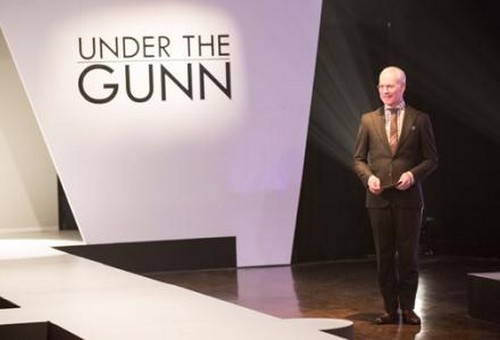 Tonight on Lifetime Emmy Award winning Tim Gunn returns with another new episode of PROJECT RUNWAY: UNDER THE GUNN called, “Unconventional Vampire.”  If you have never watched the show before America’s favorite mentor, Tim passes the torch to “Project Runway” alumni Mondo Guerra, Anya Ayoung-Chee and Nick Verreos, who have shown their prowess on the runway as contestants, but now must prove they have the vision and business savvy to mentor and manage a fashion empire with 15 new up-and-coming designers under their watch.

Each mentor will have a team of designers they must manage, coach, cheerlead and, when necessary, knock down with tough love in order to lead them to runway success. This new crop of designers will face the critiques of designer Rachel Roy, celebrity stylist Jen Rade, creator of some of the most iconic red carpet looks in Hollywood, and TV fashion correspondent and Marie Claire Senior Fashion Editor Zanna Roberts Rassi.

On tonight’s episode ith a total of 15 designers, three mentors, and four spots per team, three contestants will be eliminated before the real competition even begins.  Inspired by a vampire world, the designers use unconventional materials to create a mysterious look.  The Guest judge tonight is Sarah Hyland.

Tonight’s episode is going to be another drama packed one, which you won’t want to miss. So be sure to tune in for our live coverage of Lifetime′s Under the Gunn Season 1 Episode 4 at 9PM EST! While you wait for our recap, hit the comments and let us know how excited you are about the new episode of Under The Gunn tonight.

Sarah Hyland guest stars and shares the trailer for her upcoming movie Vampire Academy as she and Tim announce the challenge. Opening in a graveyard-like setting, after the challenge of “unconventional vampire” is shared, the designers and their crew were asked to go through the makeshift graveyard to pick the materials and fabrics that littered the set to give it a creepy appeal. As the designers rummaged through the fabrics and unconventional materials to get the best pick, the fun is only just beginning.

Tim begins by talking with Mondo, Nick, and Anya, offering them feedback and what they did wrong or what they could have done better to help guide them in the right direction for this next challenge. While the men received some constructive feedback, Anya was told that whatever she’s doing is working. Tim reminded Mondo the importance of cheering the designers on with positive feedback, it is also critical that he offer a more valuable critique.

Tim has to step in when Mondo is unable to offer any feedback to Sam. Michelle is Mondo’s focus this week. Asha doesn’t appreciate Michelle’s comments as she gives a backhanded compliment about Asha’s design.

Anya reviews Brady’s design and offers some helpful feedback. Tim applauded how Anya can detach herself from the designers in order to offer constructive criticism. Tim and Anya love Nicholas’ design while Asha is not feeling it at all. Anya likes Nicholas’ design but continues to worry about his time management.

Nick and Tim begin with Oscar. They compare his first design as a matador. Not good. Isabelle has a goal in mind but seems flustered. She wants multiple colors, but Nicholas wants something more basic. They are disagreeing and she’s losing focus and steam. Nick feels Isabelle’s design makes the model’s hips look big and the model agrees. She continues to argue with Nick.

The rush is on. Isabelle stil struggles with her design as Nick says it looks “costumey.” Brady is getting behind and has to enlist Oscar and his model to help him finish his unconventional design as his desire to sew in fake teeth has been more laborious than he planned.

Isabelle’s design of black and red lace is just ot working. She was so stuck on creating a very exaggerated look in the hips while highlighting the slim waist that she refused to listen to the advice Nick offered. Now, while the clock is ticking, she gets so frustrated that she is not happy with the design, that she scraps the entire dress. Blake tells her it is too late to redo anything from scratch now. She appeals to Nick who is not happy with the way she’s handled everything.

Nick’s Team: Natalia’s design was a sexy long blood-red dress with black netted corset. Stephanie went on the lighter side, but came through with a sexy, sleek design with intricate beading that made the dress. Next up, Isabelle’s design…Very different, but she is still hopeful that her last minute recreation will wow the judges. Oscar’s sleek pantsuit is hot. The way he used the red lace gave a thinning appeal to the waistline.

Anya’s Team: Brady’s dress seems too loose on the model and did not have an unconventional appeal. The model looked like she was headed to the office. The teeth on the jacket didn’t even show-so his efforts were fruitless. Shan is happy with his design. While not totally unconventional, it was very edgy and very on-trend. Lots of detail in the top. Nicholas went conservative. Anya is worried she did not watch his work close enough as the final result looked sloppy. Blake came through with a black on black dress that had just enough “unconventional” appeal, while still looking well-made and sexy.

Sam’s design yielded a few yawns though he has good detail. Michelle was very confident and for good reason. Her design stood out with the amazing way she used the black and red together to create a snake-type look. Asha’s design had great color and she captured the unconventional look really well.

Brady: Comments that he was overthinking the challenge.

Nicholas: Like the color, like the chain incorporated in the dress, but dress too conventional. Doesn’t show shape of woman well.

Isabelle: Design compared to Lady Gaga-not in a good way, too risky, like the dress, but not the use of the red lace.

Michelle: Very impressed. Zoey loved it so much she asked to buy it. Zanna was the only judge not too happy with it.

Brady and Nicholas are up for elimination and Anya is left to decide who gets the boot. She decides on Brady as the designer that has to go.

Do you love fashion? Then be sure to check out CDL’s fashion tips and critiques coming soon!