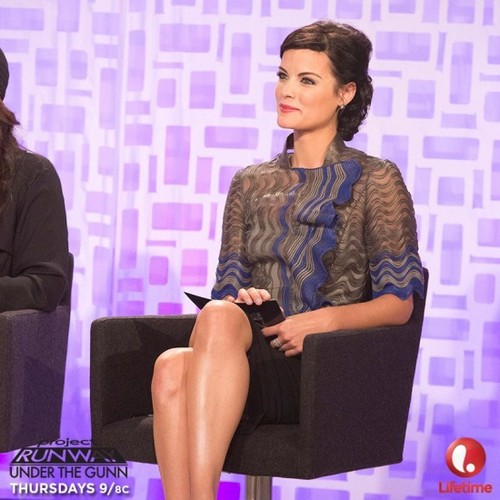 Tonight on Lifetime Emmy Award winning Tim Gunn returns with another new episode of PROJECT RUNWAY: UNDER THE GUNN. On “Superhero Fashion”  the designers get inspiration from Marvel comic superheroes for their challenge to see who will make it to the finale. Jamie Alexander joins the panel.

On the last episode there were only five designers left and the designers were working with Real Women and Benefit cosmetics.  At the judges table last week: Jen Rade, Zanna Robert-Rossi, Rachel Roy, and guest Annie Ford Danielson.  At elimination Sam and Blake were up for elimination. Blake was sent home. He was proud of himself and was happy he took the risk to be a part of this and he was very appreciative of the opportunity.  Shan and Asha were up for the winning position. Shan pulled it off and won the challenge.

On tonight’s episodethe remaining designers to find ideas in Marvel’s varied cast of characters, such as Black Widow, Captain Marvel, Falcon, Hawkeye and more will serve as inspiration.

Tonight’s episode was going to be another drama packed one, which you won’t want to miss. So be sure to tune in for our live coverage of Lifetime′s Under the Gunn Season 1 Episode 12 at 9PM EST! While you wait for our recap, hit the comments and let us know how excited you are about the new episode of Under The Gunn tonight.

The designers are inspired by superheroes; the final challenge reveals which designers and mentors will make it to the finale.

Mondo has two designers left while Anya and Nick each have only one. Sam talks about being nervous because he is in the top four, but notes that he misses his family.

Cort Lane from Marvel Television welcomes the designers at Meltdown Comics. Cort is the VP of Animation Development. They are designing a piece that is inspired by the marvel comics, they are not designing costumes. Cort describes some of the characters. Each designer selects one of the characters who inspires them most.

They each have very personal reasons for making the choice they did. They have two days for this challenge! They can now begin sketching. Sam is set on not being the “boring one” ever again. Anya trusts Shan and knows he will come out with something great. Sam tries to get a more personal feel for Hawkeye. The designers head to Mood. Asha feels like she is going to take a risk this time. Oscar believes he may just take the full two days. Asha is worried about Sam acting distant.

Shan has a good idea in theory but he is having some self-doubt and Anya reminds him that he can do it. Everyone seems to be really insecure because it is down to the wire. Even Oscar seems a little less confident. Nick continues to do well with mentoring. He is being supportive, giving good feedback, and not getting too involved. Asha shares that she is really nervous too. They give her some food for thought about the fabric she initially planned to use-so she may change her plan. Sam shares that he feels a connection to his superhero. Sam seems a little nervous as well, but Mondo and Tim both tell him they love his idea and like that he is being more risky and that feeds his confidence.

None of the designers are that motivated because they are all so nervous as they eye one another as the competition. Shan talks to his mom for some inspiration.

What looked really unfinished at first, turned out to look really nice on Shan’s model. The fact there are only four left has even gotten to Oscar. Anya feels confident about Shan’s design. Sam and Asha feel like they are the two targets and one of them will go home tonight.

Only one hour left and the designers are working feverishly to get done in time. Nick is so happy with Oscar’s design. Mondo has to calm Asha down. He is worried that neither Asha or Sam have a complete look.

Asha’s design looks amazing. Blake took a risk and used a variety of patterns. Shan hit a high note once again. The design and construction was perfect. Oscar’s design was a little extreme.

Oscar: beautiful but looks a little costumey. Love the cloak and that he used a cloak instead of cape.

Asha: Love the drama of the cape. Timeless luxury. Much better construction in the past. Very nice, but missing that edge.

Sam: Below mundane-says Zanna. Fun, different from what he normally does. Would buy the pants tomorrow.

Very tough decision and such a nail biter. The judges ended up allowing Sam and Asha to stay for the finals.

The three that get to move forward are considered the winners.