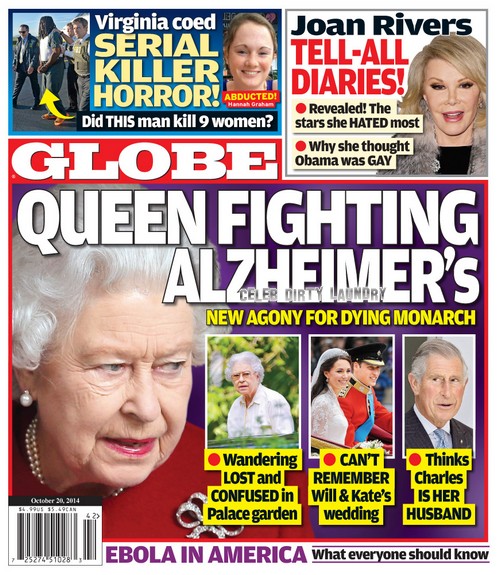 Queen Elizabeth is 88 years old, and for an 88 year old she appears to be in pretty good shape. Appearances can be deceiving though. Physically, the Queen of England is a picture of health for her age, however according to a new report she may be ailing mentally.

The October 20th edition of GLOBE Magazine alleges that Queen Elizabeth has Alzheimer’s disease. The cover of this week’s GLOBE screams, “Queen Fighting Alzheimer’s. New Agony For Dying Monarch. Wandering lost and confused in Palace garden. Can’t remember Will and Kate’s wedding. Thinks Charles is her husband.” We all want the Queen to live forever, but the truth of the matter is that’s not possible, and at 88 years old Alzheimer’s disease is a very real possibility. As always GLOBE does their research and provides details you won’t find in any other magazines, and if Queen Elizabeth is wandering around the Palace lost and can’t remember her own son, those are obvious signs of the disease that continues to haunt the elderly.

Joan River’s death continues to be in the news, and considering all of the lives she touched she probably will be in the news for a long time to come. This week’s GLOBE magazine cover reveals that Joan Rivers had penned tell-all diaries, and they are about to go public. The magazine alleges that in the diaries Joan explains why she thought Obama was gay and what celebrities she hated the most. Leave it to comedian Joan Rivers to throw shade at people from the grave.

GLOBE Magazine doesn’t just cover celebrity news, every issue has current news that actually affects its readers as well as the rich and famous. In the October 20th edition of GLOBE you can find an in-depth piece on the disappearance of Virginia co-ed Heather Graham. The police have brought in their number one suspect, Jesse Matthews Jr., and according to the cover of GLOBE Matthews could be responsible for nine other murders. This week’s GLOBE magazine also has an important piece on Ebola, and everything you need to know about the scary disease.

I can’t wait for this week’s edition of GLOBE Magazine to hit the newsstands, and I will definitely be picking up a copy so I can get all the details on Queen Elizabeth. If the Queen truly does have Alzheimer’s Disease, it could change the course of history. Will Prince Charles and Camilla Parker-Bowles push her out of the Palace, or could she throw caution to the winds since she isn’t in her right mind, and skip over Charles and name Prince William the next King and Kate Middleton Queen? Will this give scheming Camilla and impatient Charles the opportunity to call for the implementation of the Regency Act? Don’t forget to check CDL later this week for more information on this breaking story, and other hot ones inside GLOBE!