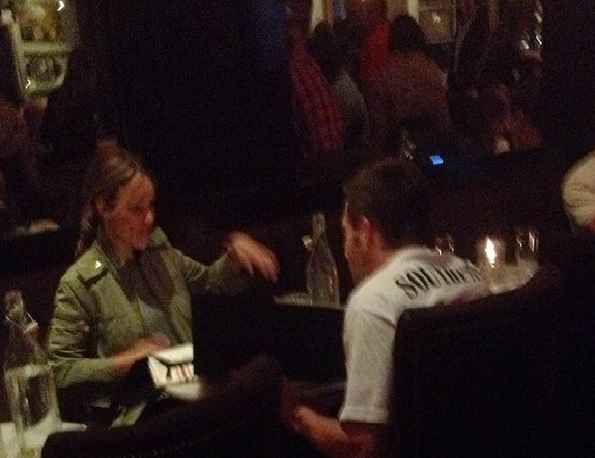 Jake Gyllenhaal and Rachel McAdams are currently filming a movie called Southpaw together, and the duo was spotted having dinner the other day, leading to a mass meltdown from their collective fans.

LaineyGossip first posted the picture [from a fan’s Instagram], and to be very honest, it could very easily be a date. It does look like two co-stars having dinner together, which makes sense considering how private Jake and Rachel are. If they were dating [as Lainey says], they probably would have hidden from the fans and gone somewhere where nobody would have taken a picture of them eating together. But, then again, would they have expected people to take a picture of them eating at a crowded restaurant? It doesn’t look like they’ve spotted the person taking the picture, and clearly, the fan was trying to be discreet in taking it.

Either way, I wouldn’t rule out the possibility of them dating completely. Sure, Rachel was kissing her boyfriend last month, but the two haven’t been spotted in public since then. Jake, on the other hand, had split up with Alyssa Miller recently but the two have been having an on-again/off-again relationship since then.

It’s very possible that Rachel and Jake engage in a torrid romance while on the set of Southpaw and break it off with their significant others. Seriously, wouldn’t they make an adorable couple? Plus, neither one of them is a stranger to starting relationships with co-stars, and in fact, Rachel got together with Ryan Gosling after filming The Notebook together. Could Rachel and Jake become the next McGosling?

Plus, Rachel and Jake reportedly play love interests in Southpaw, which would add an additional element of life imitates art and all. But, again, we’ll just have to wait and see how this works out. For now, we can definitely guarantee that the two are friends and probably get along very well, but a relationship? Do you guys think Rachel and Jake could end up in a relationship, given time? Let us know your thoughts in the comments below.