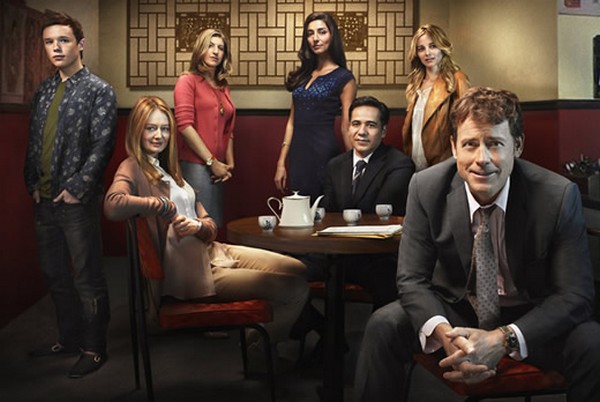 Tonight on FOX their bold new legal drama RAKE airs with its sixth episode called, “Mammophile.”  On tonight’s episode, a mother and son confess to the same murder to protect each other. Meanwhile, Keegan deals with the fallout of an auction at his son’s school; and learns that Mikki is dating someone he knows.

On last week’s episode Keegan defended three Amish bakers when they’re accused of attempted murder for shaving off the beard of a bishop who tried to save a woman he thought was in danger. Meanwhile, Scarlet and Ben planned a recommitment ceremony; and Keegan met a woman on social media who shares…

On tonight’s episode Keegan must use a highly unusual tactic to defend a new client (guest star Brian Baumgartner) and his mother (guest star Debra Mooney), who both confess to committing the same murder, in order to protect the other. Meanwhile, as a result of Finn’s school auction, Keegan is stuck with Louis (guest star River Alexander), an annoying boy whose father was the only bidder in the “A Day with a Lawyer” auction item. Also, Keegan discovers that Mikki is dating someone he knows

Don’t forget to come back here tonight at 9 PM EST for your live recap of Rake season 1 episode 6 “Mammophile.” In the meantime, be sure to hit up the comments section below and let us know what you’re most excited about for tonight’s episode.

RECAP: In between his mild on again/off again flirtation with Mikki – Keegan has learned that he has to watch a young boy all day because of some stupid auction. Louis Goodman’s father won a day with a lawyer at the school’s auction. Apparently, he was the only one that put down a bet so his win was always in the bag but now Keegan is stuck with Louis being underfoot.

Keegan tried to talk the father into taking Louis back and the man did a runner on him. It seemed like Mr. Goodman couldn’t wait to get rid of his son and Keegan soon found out why – the kid is downright rude. He’s supposed to be following a lawyer around while observing yet Keegan feels like he’s getting judged. Louis for the most part is quiet. It’s when he pulls out his notepad and pen to begin taking notes on what should be an enjoyable pass time that unnerves Keegan.

He wanted to show the kid what’s it’s like to work so he went down to the courtroom to find a client. And he ended up finding George Copley and his mother. Talk about a Norman Bates situation waiting to happen. The mother and son duo are way too close for comfort. So close George doesn’t want his mom to know why he was arrested.

George has a nasty habit of being a peeping tom. He would stalk this one woman who would happen to leave a window or curtain open sometimes. And George would watch her from that area waiting till she undressed because he was obsessed with her breasts.

However George didn’t want his mom to find out and out of respect for his client – Keegan didn’t tell her anything. Instead he came up with some legal mumbo jumbo to confuse the woman when she asked about the charges. He was hoping that would get her to lay off when it in fact made her even more curious to find out what the legal slang meant. Once she realized Index was short for indecent exposure – she wrongly blamed the “hussy that used her breasts to taunt her poor son, George”.

Keegan wanted to help her out but a little part of him was creeped out by her whole relationship with her son. When he got George out on bail his focus naturally went elsewhere. Like to the charges he’s facing from the IRS. He went back to court with David Potter and this time it looked like David had a chance of winning. But Louis managed to do something nice for a change by stepping in.

Louis pretended to be Keegan’s ward and that made the judge go easy on “them” seeing as Keegan is responsible for someone else. In return for such generosity though Louis, of course, wanted something. He made Keegan take him to the racetrack where he then put 500 dollars of, miraculously, his own money on what he knew to be a sure thing. Louis won 19,000 dollars and Keegan as was getting it for him when Roy decided to appear and take all of the money. Despite his denials, Roy didn’t buy his story that he was actually stealing from a kid. So he told Keegan that the money would go towards the man’s debts.

Louis wasn’t happy that he lost all of his money and he didn’t quite buy Keegan telling him he’ll get around to returning it. Still, they were only just beginning to argue when the police showed up.

No worries; no one was getting arrested. The cops took them to a secretive meeting with Gloria Barzmann. Gloria wanted a minute alone to warn Keegan about Marcus and she also wanted to kiss him. She may not admit to that but that’s why she really called the meeting in the first place. By time Keegan was finished with her – he saw that Louis, like his father, had done a runner. He wasn’t far though.

Louis merely wanted some privacy to take a phone call. And so Keegan felt their time together should be put to an end. He dropped off the kid (literally pushed him out of taxi) at the kid’s home.

It’s when Keegan returned to his place that he finally caught the news. George Copley had been accused of killing his obsession, Molly. Then later his mother confessed to the same crime. One of them is a cold blooded killer and the other is doing all of this protect someone they love. But who did it? So far all the evidence says the crime was done by a single person. A fact Keegan has to explain to both Scarlet and Ben during a dinner out the couple had planned.

He would have kept arguing with them too if he hadn’t seen Mikki. Although she’s going by a different name now and she also happens to be seriously dating David. Something Keegan never knew and he’s kind of taking it personally that she’s dating his hated enemy.

Keegan didn’t blow her cover – he could have yet he didn’t. Hence he got drunk that night and made an ass of himself at an otherwise very nice dinner. He’s defending at least on killer, lost out on his chance with Mikki, and his ex now knows about him covering up his son’s illicit relationship with a teacher. So he deserved a night off from his somewhat good behavior.

Then over the course of the trial – he made sure to channel all of his excess energy into the right place. Keegan got both mother and son out of the charges. He hadn’t particularly like that part of his job though he did it anyways and later he ran into Louis who wanted his money back or else he swore he was going to do something. And Keegan dared him to do his worse.

Keegan didn’t care anymore and once Louis saw that for himself – he robbed Keegan! He stole Sir Arthur Conan Doyle’s pipe!

Keegan was tempted to tell David about Mikki. He had the phone in his hand just waiting to make the call but then he changed his mind. He didn’t want to be the one to take away her happiness even if it he won’t be in the picture anymore. Sounds like a redeemable quality!