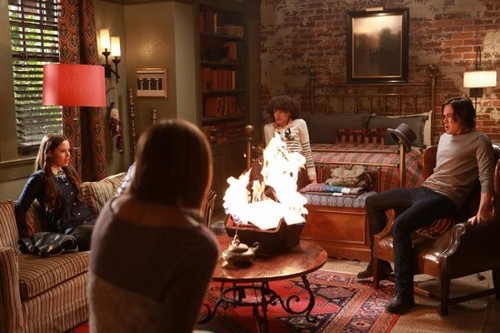 Tonight on the ABC Family the new series RAVENSWOOD returns with the mid-season premiere called “Revival.”  On tonight’s show, lives are in an upheaval.  Did you watch the last episode before the hiatus?  We did and we recapped it for you, right here.

On the last episode before the hiatus the gang made discoveries both horrifying and intriguing while investigating what they were up against.  Just when Caleb thought he was getting answers to what might be haunting Ravenswood, he hit a dead end and was left with more questions. Miranda tried to prove that she’s where she wants to be, but Caleb sensed she’s in grave danger. Remy unwittingly uncovered a major clue in how to break the curse, but further investigation led to a truly haunting scene.  Meanwhile, Caleb tried to reassure Hanna, Luke tried to get on the same page with Remy, and Olivia strived to reconnect with Dillon.

On tonight’s show, fresh off his trip to Rosewood, Caleb struggles to deal with the aftermath of his brief time with Miranda on the other side. Remy realizes her dreams may be the best clue they have into understanding the pact, but she unwittingly attracts something that is determined to make sure Remy doesn’t wake up. And Miranda decides to haunt Mrs. Grunwald for answers but discovers Grunwald may have a ghostly friend of her own. Meanwhile, Luke and Olivia are unnerved by Collins’ increasing attention towards their mother, and Olivia makes a major decision about Dillon, without realizing his true motivations.

We hope you stop by for this new show!  If you are fans of Pretty Little Liars, I’m sure you’ll enjoy it.  Make sure to come back here later tonight at 8 PM EST for your recap. What are you most looking forward to this season?

Caleb and Miranda’s historic doppelgangers are kissing in the park. There’s a newspaper beside them, which tells us that we’ve journeyed into the past. Old Miranda hears music and asks if Old Caleb hears it too. They walk toward the organ music and Caleb looks worried. His father’s automobile is parked and Miranda’s family’s horse is standing outside as well. The two stumble upon a secret meeting taking place. It seems as if these old men, and one mother, are making a pact to “exchange lives.” Old Miranda’s mother, Esther, was there — and she strongly opposed the pact.

All it cost: 5 innocent lives.

Back in the current time, Miranda reveals that she can’t leave the graveyard, that Collins knows that she’s a ghost and bound by the premises. Caleb and the group read from a journal. Caleb utters the name of the preacher that was in attendance during the time the pact was signed. The journal immediately catches flame. Caleb says that they need to find out more about this mysterious preacher.

Olivia and her brother go home. Mr. Collins is there delivering an orchid. “She always loved orchids,” he says. They’re not warm to him, as they think he may have murdered their father. Plus, he continues to keep secrets.

Caleb reveals to Miranda that he broke up with Hannah. Miranda isn’t loving the sound of that, because now H will think that she stole him from her.

Luke and Remy have coffee, and Remy is eager to find out more about the secret locket they discovered while reading the historic journals.

Olivia confides in Dillon, whom we know to be a VERY SHADY CHARACTER (he was caught conversing with the creepy ghost girl from the last episode), and he invites her over to his house tomorrow night when his parents will be out of town.

Remy falls asleep in the coffee shop and has a nightmare. She wakes up screaming.

Meanwhile, Remy asks her mother, a doctor, if she can give her any medication to help control her dreaming. She says that Remy needs to gain control of her dreams by opening up her mind and take action — and maybe they’ll lead her to some answers.

Miranda and Olivia devise a plan to get the mysterious jars Collins is hiding. Miranda thinks that she might be able to get Grunwald to help her. Miranda tried to spook Grunwald, but it doesn’t quite work because Grunwald has always had a sixth sense when it comes to the strange workings of Ravenswood. As Grunwald leaves Collins’ office, a mysterious energy grabs Miranda.

Olivia tries her hand at Grunwald next. She runs into her at the coffee shop. Olivia says that they found the jars and that they know one of them is keeping Miranda’s soul bound to the graveyard. Before Grunwald leaves, she whispers into Olivia’s ear, “Be careful, my dear. You think you have the answers, but you don’t even know what the questions are.”

Miranda and Caleb have a heartfelt conversation about what happened when they connected in the spirit world.

Remy’s mother helps Remy get to sleep and attempts to help her gain control of her dreams. When Remy drifts to sleep, she enters a scene similar to the one the show opened up with. She’s wearing the locket around her neck and she appears to be having some control over her actions and the obstacles leaping out at her. She hears chanting, chanting, chanting. In the waking world, a shadow sneaks up on Remy. She wakes up and the shadow darts away.

Remy talks with Luke. She wants him to promise that he’ll watch over her as she dreams, and to not wake her up until she’s absolutely ready — until she sees what she needs to see.

Everyone gathers at Caleb’s house — to watch Remy sleep. Dillon calls Olivia. He says he’s picking her up. When he gets off the phone, the small ghost girl appears. He asks if she’s satisfied. She says, “It’s not me you have to worry about.”

Remy starts sleeping and, soon, begins sleep walking. She gets up and walks right out the door.

Grunwald is knitting and something rips her work from her hands. It’s Miranda. Mirand whispers in her ear. Grunwald can sense her anger, sense everything she’s saying. “I know you must be angry, child. I know you must feel like a prisoner. But it’s the only way.” The mysterious energy reaches for Miranda, but Grunwald gets up and, in a commanding voice, says, “ENOUGH!” and it retreats into the woodwork.

Meanwhile, Remy is sleep walking and finding answers. She discovers that the priest who orchestrated the pact was just a deliverer. He hands the contract to a man in a truck labeled Collins. She thinks the mysterious preacher, who exploded into a flock of ravens and took to the skies, was working with the Collins family.

Grunwald lights a circle of candles. She sits in her chair and summons the strange ghost energy that attacked Miranda. “I know, I love you too,” Grunwald says to the ghost.

Olivia is in Dillon’s car. He looks in the backseat, only to see the small ghost girl smiling evilly.