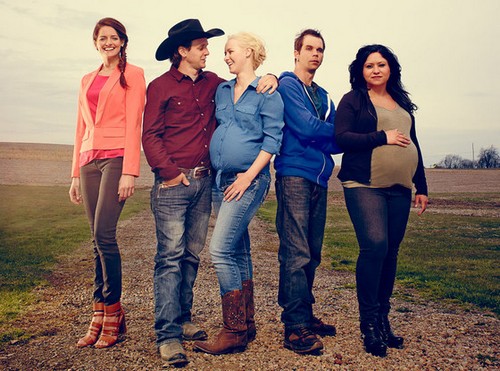 Tonight on TLC Return to Amish, the Breaking Amish spin-off airs with a new episode. In tonight’s episode “Six More Weeks of Winter,” Chapel gets heartbreaking news and now must figure out a way to tell Andrew.

On the last episode Abe and Rebecca introduced their newborn baby to the Schmucker family, but when Sabrina showed up, her pregnancy takes a scary turn. Jeremiah took on the Schmucker ladies. And Mary argued with Chester about the church, while Chapel got some news. Did you watch last week’s episode?  If you missed it we have a full and detailed recap, right here for you.

On tonight’s episode Chapel gets heartbreaking news and now must figure out a way to tell Andrew. Mary and Jeremiah showcase their business idea at the local Groundhog’s Day Festival. Sabrina gets some questionable advice while Kate stays focused on her career in New York.

Return to Amish begins tonight with the results of Chapel’s biopsy. Unfortunately, her cancer has come back and now she has to think about what that will mean for her and her children – her boyfriend has been and promises to always be firmly at her side as she goes through this. So it seems she won’t be going through this alone.

Andy really loves Chapel and he wants to do what’s best for her, but as we’ve seen before he can sometimes react very rashly when stressed. That sort of behavior has typically landed him in jail and knowing Andy he could be heading for a repeat of the experience. Abe and Rebecca have recently heard certain stories about Andy. Some people are claiming that he’s up to no good as in risking his freedom again no good. And his sister-in-law is clearly disappointed.

She feels like she and Abe have invested a lot of time and trust in Andy. So if he’s back to doing something illegal then he might very well find himself without a brother. Because how many times can they really give him a second chance?

However the only thing that’s been confirmed about Andy is that he’ll go as far as to sell out his family in order to be and get what Chapel deserves. He sold a quilt his grandmother had stitched. It was pass down from his grandmother to Mary and then finally to him. As for the answer to why he sold such a sentimental piece is that he wanted to buy Chapel an engagement ring with the proceeds.

Probably what will hurt the most is the fact that he wants to marry English. Mary wouldn’t have mind that he sold one of her quilts seeing as that’s what she’s been doing with Jeremiah to support the family. But she will be upset he sold an heirloom because of some English girl. Mary has always been there for her children. She’s so supportive that Andy could have asked for another quit or possibly the money and she would have most likely have given it to him…eventually.

Mary is like that with all the former Amish kids. Since New York, she’s taken up yoga and eating healthier thanks to Kate. She’s also taken Sabrina under her wing to advise her on what to do for the baby and she’s stuck by Jeremiah even when no one else would have. The only thing she’s ever been stubborn about is wanting the kids to return to their Amish roots. Something Andy can’t do if he marries Chapel. So when her son announced he was going to propose, Mary took it the wrong way. She wanted to argue with him about the girl not being good enough and he hit her with the bombshell. He told the family that Chapel’s cancer is back and that he was going to marry her no matter what they said. And that’s what finally stopped the diatribe against Chapel.

At the end of the day, no one wants to think about someone so young dying and it made everyone reflect on Andy’s situation. During the argument between Andy and his mother, Abe or Rebecca could have said something about his dealings. But they didn’t. Chapel’s diagnosis is what made them put all the negativity behind them.

Even Chester supported his son in his own quiet way. He just wanted Andy to know that he’ll always be there for him and the same went for his wife. Mary didn’t know about the depth of Andy’s feelings until she saw for herself how much it hurt him to merely think about Chapel dying. After that it didn’t make that Chapel was English or that she was little too much like Rebecca – Mary was going to accept her for Andy’s sake.

Though all of this could honestly have been for nothing. Andy later on proposed to Chapel and she surprisingly turned him down. She didn’t want to marry while she was sick. Chapel said it wouldn’t be fair to him.
Do you think he’ll try to get that quilt back?