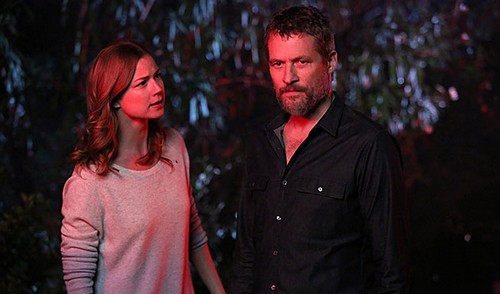 Revenge spoilers and synopsis for season 4 episode 9 follow where we reveal what will happen in the plot for “Intel.” Revenge starring Emily VanCamp and Madeleine Stowe returned tonight to ABC with another great episode. Are you enjoying this season as much as I am? I cannot wait till next episode and sadly we are going to have to wait two-weeks.  To wet your appetite we have a sneak peek video and some insight for you below on what is going on in the next episode called, “Intel.”

On tonight’s show Victoria’s [Madeleine Stowe] future was uncertain as the FBI closed in. Meanwhile, a mysterious new adversary emerged. Emily and her Dad have a heart to heart and he warns her away because he’s got bad guys after him but of course she has to help. Nolan finds out that Louise is insane and teams up with Margaux to take her down.  More happened! If you missed the episode we have a full and detailed recap, right here for you.

Spoiler alert: If you’re one of those people who doesn’t like spoilers, stop reading now! We have some juicy spoilers for you about the season 4 episode 9 of ABC’s “Intel.”

ABC’s Official Synopsis: “Emily and Victoria learn that information is the most dangerous weapon while Nolan offers up information of his own in order to salvage his reputation.”

On next week’s episode Emily keeps a dark new secret from her allies.  “Intel” was written by Karin Gist and directed by Wendy Stanzler.

Revenge Season 4, Episode 9 “Intel” airs on ABC on November 30th, 2014. Check out the preview video below and photos and let us know in the comments below what you think!