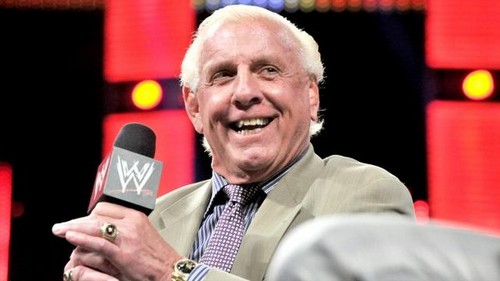 Of all the WWE wrestling legends, the Nature Boy Ric flair sits at the top of my list. During his time in the ring, Flair was simply the greatest wrestler and talker of all time. While he has gotten up in age and certainly is in no position healthwise to get it done in the ring, he still is capable of delivering a fantastic promo and touting younger wrestlers. Despite this, his impending return to WWE Monday Night Raw could be a massive mistake. Here are three good reasons why:

Flair is unpredictable at this point –  Flair has never been shy about his drinking, womanizing and partying and it has not changed much if you listen to what he has to say about it. Flair will always be Flair and to say he is unpredictable is an understatement. Flair might do or say anything when he gets in front of a microphone. One only needs to look at the video game release gig that Jim Ross famously got axed over to see what I mean.

Ric Flair is the greatest of all time. Back when he was a wrestler and unpredictable, they could do something with the results such as create a new feud or make a match. Now when he goes nuts, there is little they can do short of get embarrassed. Today’s WWE can’t be storyline driven by Flair’s outbursts…it is too fragile. Perhaps when they were in their heyday an older, unpredictable Ric Flair would be sustainable. Not today.

Flair will steal the spotlight without even meaning to –  Another thing about Ric Flair is that he can’t help but be larger than life. Sort of like Hulk Hogan but for different reasons, Flair commands attention like few people ever have in the wrestling world. If you bring him in as a manager or sidekick to a hot young talent like Dolph Ziggler or The Miz, there is a pretty good chance that he will outshine them. Could he help them out on the mic? Of course he could and that would be a positive in many instances….

You really need to ask yourself one question to know this concern is true….if Flair walked out with Dolph Ziggler, would the crowd chant Dolph’s name or go “Woooooooooo” right away?

Flair is not in the best of health –  According to many sources, Flair is in much better shape than he was a year ago. That said, he is still in pretty tough condition. When you have a history of health problems like Flair has, one has to be concerned about heart attacks and tragedies inside the ring. After Owen Hart passing away in the ring from an accident and countless other premature deaths and scandals, the last thing the WWE needs is something to happen to the biggest star in their history on a Live program. Yes, he passed the medical tests and yes, everyone has some risk attached. With Flair, however, the risks are much higher and that is a scene that wrestling fans would not ever want to see. Flair has a history of not being able to resist getting involved for a pop. Flair is not going to sit on his hands.

As much as I love Ric Flair, I never want to see that happen. The risks are too high and the downsides outweigh the upside.