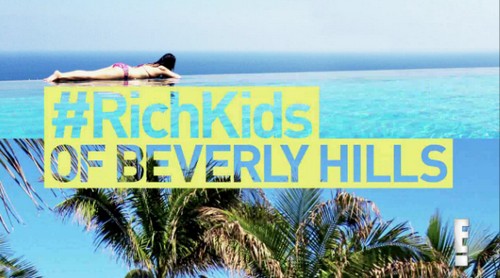 On Sunday, January 26, when this recap was originally posted, it contained 3 instances of an offensive slur in one paragraph.  The intern responsible for this post has been dismissed and the post corrected.  We sincerely apologize for this upsetting incident and assure readers that stringent editorial controls have been put in place to ensure that nothing like this ever happens again.

Tonight on E! their new reality show #RichKids of Beverly Hills airs continues with another new episode called, “#crazyincabo.”   On tonight’s episode Brendan plans a getaway to Cabo, Mexico, for his first anniversary with Morgan, who decides to invite their closest friends to tag along, a decision that leads to tequila-fueled tension and feuds.

On  last week’s episode we followed Dorothy as she went house hunting in Beverly Hills after finally deciding to move out of her parents’ home. In addition, the self-proclaimed “Persian Princess,” Roxy, confided in Morgan after she went some life-changing news: her unlimited spending was being cut off by her concerned parents.

On tonight’s episode for their one-year anniversary, Brendan plans the perfect luxury getaway to Cabo. But when Morgan invites their closest friends to join, former feuds and tequila-fueled tension threaten to destroy their paradise.

Rich Kids begins with Morgan and Brendan discussing their upcoming one year anniversary over a dinner date. They share that they agree their one year anniversary is a big milestone, and they should celebrate in a big way. Brendan suggests going to Cabo, Morgan loves the idea, but wants to invite friends along for the trip. Later, Morgan and Roxy go to the beach, where Morgan shares her and Brendan’s plans for Cabo San Lucas. At first, Roxy doesn’t want to go, and she’s worried about Dorothy being there, in addition to coming up with the cash for the trip. Morgan tells her that Brendan will take care of everything, and not to worry about Dorothy. Dorothy comes over to Morgan’s later for a visit, and Morgan invites Dorothy on the Cabo trip. Morgan shares her invite list with Dorothy, including a guy named Cooper, whom Morgan feels would be a good match with Dorothy. Dorothy also mentions her reservations about going on a trip with Roxy. Like she did with Roxy earlier, Morgan tells her not to sweat it, and to forget the past.

Later, Morgan, Brendan, Roxy, Dorothy, and the rest of the crew fly out to Cabo. Finally, they arrive at the resort, where the group share margaritas. They are greeted by EJ. Then, the group splits up to go to their rooms. Morgan and Brendan arrive at their room, where Morgan finds a surprise from Brendan-it’s the Givenchy bag she’s been hinting to him about. She’s so excited she sends Roxy a picture, though Roxy is just down the hall. Later, the group goes out for dinner, where they dance in a champagne shower. Dorothy flirts with Cooper.

The next day, Morgan and Brendan get dressed for the group’s dinner reservations that evening. The couple heads down to the lobby to wait for the group, but quickly grow irritated because the group is late. Morgan, Brendan, Jonny, and Roxy leave without the rest of the group for the restaurant. Dorothy, Cooper, and the rest of the group arrive nearly an hour later. Morgan is furious, and she let them know it, as the dinner goes on, Brendan gets frustrated because everyone is texting on their phones, instead of paying attention to dinner. He demands that everyone put their phone in the middle of the table. Roxy wants her phone, and Morgan flips out on her, telling them all they can leave if they don’t like it. She and Brendan leave the table. After cooling off, they come back to the table, and the group shares a shot of Don Julio to ease the tensions between them.