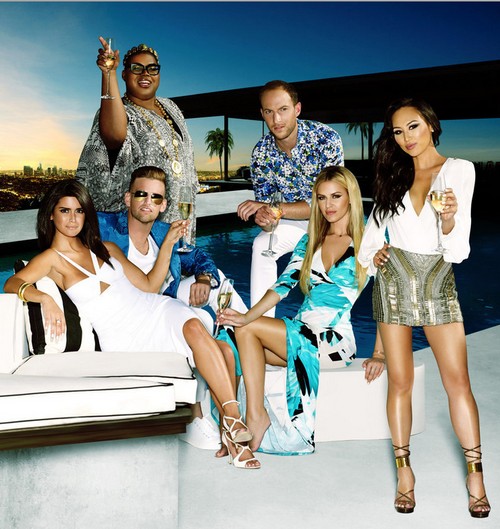 Rich Kids Of Beverly Hills is an American reality television series that has aired on E! since January 19, 2014. The series focuses on the lives of a group of twenty-something millionaires and billionaires showcasing their lives.

For those of you not familiar with the show, welcome back to the 90210, which has now acquired a new resident as EJ Johnson relocates to Los Angeles and joins his friends in the fabuluxe zip code over flowing with sunshine, designer fashions, and plenty of plastic by way of surgery and credit cards. The new season kicks off with a trip to China for the opening of an elite department store that just so happens to be owned by Dorothy’s retail mogul father. Joining Dorothy on the trip are Morgan, Brendan, Jonny, and Roxy who is growing tired of Dorothy’s reoccurring jabs about her career, style and being financially cut-off by her parents. However, Roxy isn’t the only one carrying drama in her couture luggage as Dorothy’s boyfriend Cooper is inexplicably absent from the crew’s overseas adventures. Even with the galas, VIP treatments, amazing sightseeing and being surrounded by her #BFFs, Dorothy is still distracted by what appears to be a major bump in her relationship and an opportunity to show Cooper the Wang empire. Sounds like love is a battlefield, even when that battlefield is a multimillion dollar property in Beverly Hills and you’re worth billions of dollars.

On tonight’s season 2 premiere Dorothy invites her friends to China. Roxy finds herself in an online relationship.

Tonight on RichKids of Beverly Hills the new season kicksoff with Dorothy inviting her friends to China and Roxy finding herself in an online relationship.

Tonight’s episode begins with a Yacht day that EJ has planned for the gang. Eveyrone hawks Dorothy where Cooper is and she says he just couldnt come besuase 4 hours of yachting is a huge commitment. Dorothy and Morgan quickly go over the rules of yachting and says its about dressing very Micheal Kors and Ralph Lauren without actually wearing those designers. Morgan worries that Brendan is spring too much time on his phone working. She says she just wants him to enjoy the opportunity to relax to which he responds he wishes there was wifi.

After yacht day Roxy and Morgan meet to walk their dogs and Roxy talks about her online relationship. Morgan tells Roxy that her online relationship is not realistic but Roxy says she’s scared of getting hurt because she is getting over a bad relationship. She says they can only Skype and Facebook chat because he doesn’t have text messaging. Morgan worries that he doesn’t have a phone and Roxy says it’s ok because he has a Ferrari.

The gang all meets up for dinner and Dorothy tells them that she’s going with her parents to China where her dad is opening the largest retail center. She invites the gang to come in order to show them more of her culture because it’s more than Mr. Chows and Panda Express. She also tells them Cooper will join them in China to which they are all shocked because he never comes to any group events. They all agree to go and cheers to China.

EJ and his sister Elisa go shopping for shoes. Elisa asks EJ what he’s gonna do for the summer. He tells her he feels pressure to be successful because of their parents. He says he really wants to make it in the fashion industry and have a talk show where he talks pop culture, fashion and about things that will help people.

As everyone gets ready for China they all meet for a little brunch. Jonny and Roxy worry about the schedule when Cooper calls Morgan about not going to China. Cooper says he’s having anxiety about being with Dorothy for 7 days and about meeting her family. Morgan tells the others and the all agree that he better not flake out on Dorothy.

Dorothy and Cooper meet up for dinner. Dorothy says she’s excited about everyone coming to China but she’s more excited about Cooper coming because he’s her first real boyfriend and she really loves him. Copper doesn’t mention his reservations about going.

Morgan talks to Brendan their plans for Saturday to which Brendan tells her that he’s going to work for the day. Morgan isn’t happy and says she feels they’re growing apart because he’s always working. Brendan feels they spend enough time together because they live together and that he has to work so they can enjoy the things she likes to do. Brendan says overreacting because he has bills to pay and they’re going to china for 10 days and he’ll be away from work then. Morgan doesn’t care about that and Brendan walks out.