BY Heather DiPietro on May 13, 2014 | Comments: one comment
Related : Reality TV, Recap, Television 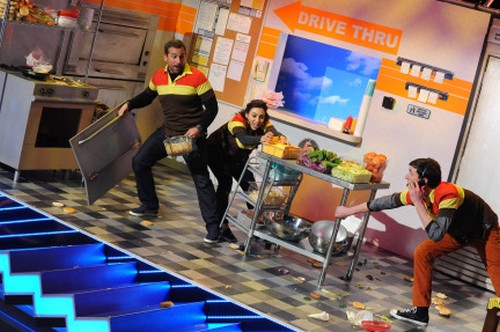 Riot is an upcoming comedy television series from Fox Broadcasting Company and based upon the Australian Slide Show television series, itself based upon the French program Vendredi Tout est Permis Avec Arthur (“On Fridays, Anything Goes with Arthur”, aka Anything Goes), where two teams of celebrities competed in a number of challenges and games, including one on a huge set that tilts at 22-1/2 degrees.Hosted by Rove McManus, weekly episode “guest” captains include a rotating set of actors.

Tonight’s episode is sure to be a great one — and will be perfect to get you in a good mood. So don’t miss out! Come back here tonight at 9 PM EST for your live recap. In the meantime, hit up the comments section below to let us know what your thoughts are abuot this new show!

Tonight’s episode of the new series Riot, starts off with some questions for one of the show’s stars, Steve Carell before jumping in to what they label “slide show.”

Steve, Rob, and Meryl have a scene where they are to be in a slide-through diner. The entire set is tilted to one side so the actors must do the scene while trying to accomplish things like answering the phone, making fries, grabbing buns and cups, and making burgers for their pretend customers. As they continue through the scene, they slide along down to the bottom along with all their supplies and food. A fire in the kitchen provides for the next challenge they must conquer. Mopping the floor proves a bigger mess than if they just left the food to fall and the team slides even faster to the bottom. Each time, they struggle to climb back up to their spot in the diner. Just as they seem to be getting a rhythm, they get robbed. Break time and the team leaves the set loaded in water, ketchup, mustard, etc.

Next on the list…”A Bunch of Jerks.” The second team now has the challenge of making sure that everything they say in the conversation they are having is in the form of a question. For those who respond with a statement instead of a question, they get yanked in the air by the wire attached to their clothing. Second round is more challenging and the trio have to pretend they are in a lingerie store. The hard part is everything word they say must begin with letters in alphabetical order starting with the first person whose first word in their sentence begins with an “A,” next person has to begin their sentence with a “B,” and so on. Steve adds just enough to each skit to make it more goofy. They are then challenged with creating a dialogue using titles from Michael Jackson songs. They are pretty good…there is not much pausing for these three as they quickly come up with a full conversation that includes a Michael Jackson song within each sentence.

Next up….”Mime Sweeper.” This one’s a little more risky. Andy, Rob, and Jessica are part of this skit. They play charades as they have to act out what is showing on the screen behind the person guessing. If the person doesn’t guess the word in time, the one giving the clues gets hit with a big wrecking ball right off the podium they are on. Words such as garbage truck, lumberjack, camel, and more must be guessed before time runs out and the one giving the clues is knocked to the ground. Steve gets a turn to guess and starts off slow when he must guess the word lifeguard, but then guesses hot air balloon in one second and redeems himself.

Next up is “Alphabody.” Each pair must come up to the center carpet and form letters one at a time to build the word they are given. The hard part is that they are creating the letters with their bodies!

Next up…”In the Dark.” Brian, Meryl, Rob, and Jessica. The foursome must act as couples with relationship struggles who are dining together…and everything is in the dark. One couple is hosting the dinner party, and is bickering the whole time they attempt to find their way around their set (which is to be a home) in an effort to prepare the table for their guests. The guests arrive and they add some spice to their improvised script by adding in an affair with the couple kissing while their partners are in the dark (no pun intended). As they continue on to dinner and small talk (still in the dark), Steve joins the set and scares the women by coming behind them and startling them. They couple having an affair get so scared, they give up the dirt! Cure skit. Best so far—especially when Steve comes to visit.

Next on the list is “Shadow Puppets.” Steve, Meryl and Rob are first ion the game of shadow puppet charades where the clues in the shadows must tell the title to the given movie. Steve and Meryl must provide enough clues to get Rob to figure out the movie Toy Story, then Hunger Games. He even guesses Sherlock Holmes quickly. Some props can be used. Andy, Jessica, and Brian are next. Brian guesses Saturday Night Fever, Saw, 12 monkeys and Beauty and the Beast.

Tonight’s episode ends with another “Slide Show.” Jessica, Andy, and Brian are on the tilted set first with Brian acting as a drill sergeant who is pushing his recruits to accomplish various tasks like crawling under barbed wire, going through mud, and other training…all while on a slant as they try to stand up without falling. Steve comes on as the General and forces the drill sergeant to join his recruits in the mud. They all pile on one another on the mud and take the s