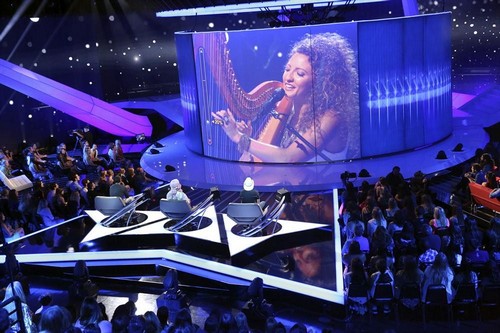 On the last episode 12 phenomenal singers auditioned. One of the most meorable audtions was April Lockhart. She’s 18, from Warren, New Jersey. She wanted to be a punk rocker when she was a kid. She has amniotic band syndrome. She is missing one hand because her umbilical cord was wrapped around it and she lost it. She says learning to play the guitar was incredibly hard. She’s got a little prosthetic attachment that lets her pluck the guitar and she strums right handed and she makes it through – America and the judges loved her. Did you watch the last episode? If you missed it we have a full and detailed recap, right here for you.

Tonight’s Rising Star is going to be exciting, and you won’t want to miss it. So be sure to tune in for our live coverage of the show — tonight at 9 PM EST!  While you wait for our recap, hit the comments and let us know how excited you are about this new show.

It’s time for #RisingStar. Josh Groban goes over the rules again about how to vote and how to get the wall to rise up. Luda, Kesha and Brad are all there as usual. First up tonight is Dana Williams, age 24. She’s from LA and her dad played guitar for Michael Jackson. She sings Stay by Rihanna. She’s a little pitchy in spots, but she ends up with 87%. All three judges voted yes. Luda says she needs to project more on her lower register. He comes to give her a hug for her dad that she lost. Kesha says she could win Rising Star and Brad says she’s as good as it gets.

Next up is a group called Unselfish, a group of four men – AJ, Antoine, Kevin and Brandon – all in their mid-20sfr om Atlanta. They perform F.U.N.’s Some Nights. Brad votes no, Luda no and Kesha yes. They ended up with just 46%. Kesha says she liked them and loved their energy and says they are the cutest. She said their harmonies need work. She says she thinks they have a future. Josh reminds them that no group has made it through so far. Luda says he agrees with Kesh and says they need to work and fine tune it. Brad says the same. He says they have good spirit.

Performing next is Cliff Cody, a 39 year old male registered nurse who has two goats, one named Macklemore and one named Ryan Lewis. He sings I’m Gonna Be Somebody originally done by Travis Tritt. He seems pitchy but his guitar playing is nice. Kesha and Luda vote no, Brad yes and he gets 49%. He comes out and Brad says he voted yes to give him a boost but thought he chose the wrong song. He says he has a strong voice but thinks he had nerve issues. He says he has a lot of potential. Kesha says she didn’t hear it until the end but the rest was pitchy. Luda says he didn’t give it his all.

Josh invites people to tweet #TellRisingStar to make song suggestions for the head to head sing offs. Audrey Kate Geiger is next. She’s a 24 year old surfer chick from New York. Audrey Kate sings Sam Smith’s Stay With Me. She gets all three of the judges’ votes and the wall rises. She has 87%. Luda says her voice is unique and that it’s hauntingly beautiful. Brad says he agrees and says she’s soulful and says maybe it comes from surfing. He says he wants to see her loosen up next time. Kesha says to be herself more next time.

Next up is Oh.M.G. – a duo of a man and woman in their 20s that met at a house party. They started jamming and then began playing together as often as possible. They perform Ellie Goulding’s Lights. Their harmony is nice, but they’re a little pitchy. They don’t get enough to being the wall up. Luda and Brad voted no and Kesha yes. They only got 33%. Kesha says she liked the girl’s voice a lot better than the guy’s. Brad says no duos and groups have gotten through and says it’s a challenge. Luda says the solo parts have to be just as strong and the blend also has to be right.

Josh says Kesha’s #CatCult on Twitter is trending – she’s got a whole yarn playing thing going online. Luda says to call it Kesha’s cat house. Next is Gabrielle Nicole who is 20 from Cleveland, Ohio. She has chosen Billie Holiday’s My Man and rocks it from the first note. Luda votes yes almost right away as does Brad and then Kesha. The crowd is on their feet swaying by the end. She’s thrilled. The wall is up. Gabrielle ends up with 90%.

The judges give her a standing ovation. The crowd is going wild. Luda is up on his chair and says if everyone was that good, he wouldn’t have to be so tough. He tells her she’s earned the title of diva. Brad buzzed in fastest ever and says she’s ridiculous. He says it was unbelievable and thanks her for singing for them. Kesha says it was amazing and she loved that she said divas don’t do mediocre and says – holy hell. Josh congratulates her. Next, Brad performs his new single River Bank.

The next performer is Karen Hornsby, she’s 36 and from Florida. Her daughter has brain cancer and it’s consumed her life. She’s blind and can’t speak. Karen is singing To Love You More by Celine Dion. She has a good voice but it’s a little pitchy – she can hit the high notes. It also sounds a little flat to me. Kesha votes yes. Luda votes yes then Brad. She ends up with the wall rising and gets 82%. The crowd is going wild – maybe it sounded better live than it did on TV.

Karen’s husband rushes the stage to hug her. Brad says he voted yes last because she was pitchy but said she knew. He says he voted yes because the crowd was going so wild for her. Kesha says she’s about to cry. She says her story is amazing and her voice is and that she’s an amazing mom. Luda says her lower register needs some work but she wants it so much that he had to vote for her.

Next is a trio of guys called TX3 – they’re brothers, Lance, Miles and Jordan and they’re triplets. They chose Keep Your Head Up by Andy Grammer. It sounds really off to me. Only Kesha votes yes and the wall does not go up. Kesha says she was hoping that since she voted yes, they would all take their shirts off and says please. Luda tells her she has to stop and says she can’t do that.

One lifts his shirt for her. The women in the audience scream and Josh says she’s making them blush. Luda says he voted no because they need work. He says they had no stage presence, bad harmonies and were flat in places. Brad says it’s just not for him and wishes them luck. Luda asks if they’ve ever messed with a girl and traded places and they admit they have.

The next performer is Skye Griffin, 26, from Houston. They grew up with their grandmother because their mom was a drug addict until she was 16. She says it made her who she is and her mom turned it around and now helps other addicts. Skye will be singing Rihanna’s Only Girl in the World. She’s got some good runs but then other parts are a little pitchy.

Brad votes no, Luda votes no. Kesha votes yes. That seems to be the trend for the night. She only got 28%. Tough crowd tonight. Luda says her runs are off but he liked her energy. He says to work on vocal control and keep going. Kesha says she agrees with Luda and says she thinks she has it in her to do this and is fierce. Brad says she’s beautiful and talented and says maybe it was a bad choice of song.

Josh says that the three judges will be mentoring the performers for the head to head battles. The winner gets a deal with Capital Records. The last audition of this phase of the competition is Morgan Higgins – she’s 17 and is from a musical family. Morgan is singing Heart’s Alone. Her tone is good from the start but then she hits the hook and booms it out strongly.

Luda is the first to vote yes followed by the other two and the wall goes up as she belts out the biggest notes in the Anne and Nancy Wilson hit. She got 79%. Brad votes no and Kesha yes. They start with Brad and he gets booed by the crowd. Brad says it can’t be all blue. He says she was great but he remained unconvinced. He says it was a song choice and that she needs more confidence.

Kesha says she’s just 17 and is good. She says she deserved three blue arrows. She says she relates to her and that she would write songs when people were mean to her in high school. Luda says he was on the fence but that something got into her and conquered her nerves and give even more of a powerful performance and that’s what got him to a yes.

Josh says the auditions are over and brings up all the semi-finalists and the judges. Next week begins live duels.