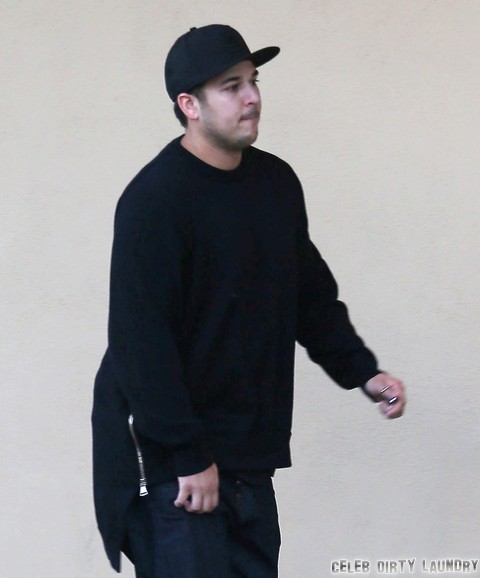 Poor Rob Kardashian. No matter how hard he tries, he will always remain the reject of the Kardashian family. Even now, his ballooning weight has become a source of discomfort for his mother, Kris Jenner, and his sisters [mainly Kim Kardashian]. Apparently, the family is embarrassed about having him at Kim’s wedding, especially since the event will boast so many high-profile celebrities.

Anyway, Rob was spotted at LAX the other day, likely departing to Europe for Kim’s big wedding day. And although sources had initially claimed that Rob had been attending a fat camp or rehab the past few weeks, (see pics at TMZ) TMZ claims that he had just been working with a renowned private instructor in trying to lose all of his excess weight.

Either way, even if he hasn’t visibly lost any weight, and probably put on more, he seemed to be in good spirits at the airport. Sure, he’s barely recognizable as Rob Kardashian, and he’ll look very, very different to what he looked like at Kim’s last wedding – but if he’s in good spirits, isn’t that all that matters?

Of course not – not when you have the Kardashians involved. Kim and Kris are reportedly looking for ways to downsize Rob’s participation once he gets to the wedding locale, even if it means that the family unit will be fractured over the wedding. But then again, when have Kim and Kris ever cared about their family unit?