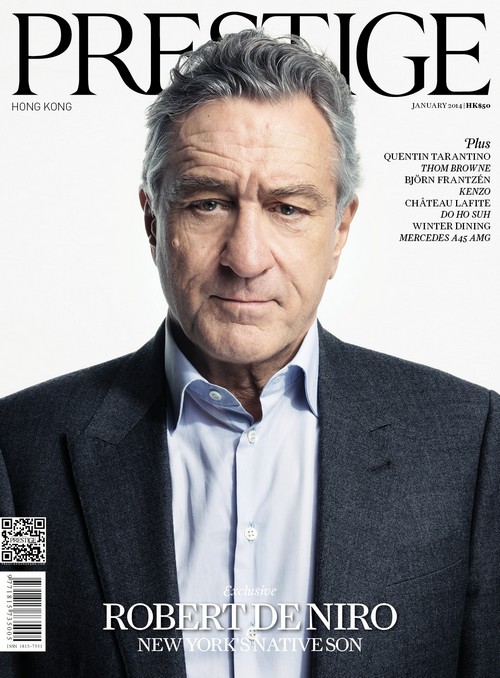 Despite some questionable career choices of late, Robert De Niro is a screen legend and always will be. His career has been defined by his versatility and his skill, and even though he was never a conventional leading man, he dominated the better part of the 70s and 80s with his sheer magnetism. Whenever he’s on the screen, you can’t take your eyes away. And Silver Linings Playbook was a welcome return to form for the multi-Academy Award nominated actor.

De Niro covers the latest issue of Prestige Hong Kong, and he opens up about his recent roles. He discusses the perception of playing a ‘stern father‘ in movies, explaining, “I’m not like Jack Byrnes [in Meet the Fockers]. I could be closer to the character in Silver Linings Playbook, if anything. I’m a pretty liberal parent.”

He also discusses his most recent movie, Last Vegas, which he co-starred in with Morgan Freeman, Michael Douglas, and Kevin Kline. He explains, “We had a nice time shooting the movie in Vegas. I play a tourist, it’s nothing like the character I played in Casino.”

Finally, the best advice he can give to not just young actors, but any young people: “Life goes on, just enjoy it, make the most of it as you go.” Well said, Mr. De Niro, well said. Too many people, especially in the entertainment industry, are determined to ‘make it’ as young as possible. They set incredibly lofty goals for themselves, instead of taking their time to enjoy life and not put all their thoughts into their ambition. Robert De Niro is a perfect example of this – his career took decades and decades of strong work to build, and look at where he is now: one of the oldest and best screen legends working today.