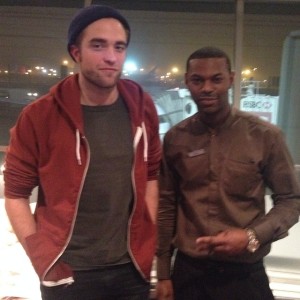 As always, Hollywood Life has given us a new piece of fanfiction regarding Robert Pattinson and Kristen Stewart. We know that Rob was going to be spending the holidays with his friends and family in London, but he seemed to have made an impromptu trip down to New York City. He was spotted jetting out of JFK on January 5th. I mean, he does have a film shoot to get to and his break is probably over, so it’s perfectly understandable that he’d be taking a flight.

Of course, Hollywood Life has taken this opportunity to claim that Rob is now going to return to Los Angeles and the patient, waiting arms of Kristen Stewart. According to them, that’s pretty much all Rob thinks about – getting back to Kristen. Forget his career, and forget his job. Los Angeles = Kristen Stewart.

To be fair, they do add that it’s more likely that Rob is going to film his new movie, Queen of the Desert. But at this point, it’s fairly delusional to assume that Rob and Kristen will get back together, especially regarding the number of assumptions you have to take to arrive at that point. I mean, there’s probably something going on between them, as we’ve said numerous times, but I don’t think they’re ever going to get back in a steady relationship, a la the one they were in while filming the Twilight series. So too bad, Twi-hards, but Rob is not going to reunite with Kristen, but he is going back to his job. Cause for celebration that he’s still got a strong career, one of the few cast members from Twilight who does?