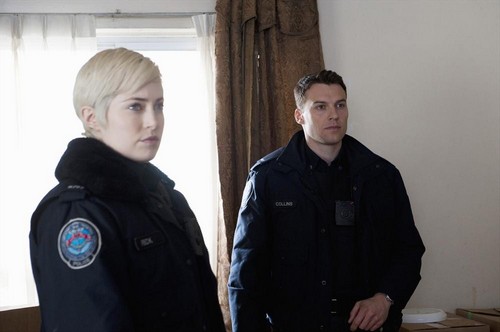 Tonight on ABC ROOKIE BLUE continues with another new episode called “Moving Day.” On tonight’s show Andy and Chloe find a severely beaten man while helping tenants move out of a subsidized housing complex that’s slated for demolition, and their hunt for the man’s attacker leads them to a major criminal operation.

On the last episode following Dov’s discovery of Chris’s cocaine problem, Chris seemed to have gotten back on the right track. But while working a residential home invasion case, Dov realized that Chris might not be ready to change after all. Meanwhile, back at the station, Steve informed Traci that he’s about to raid an illegal gambling den where her ex-husband is a regular. Both Traci and Dov had to make decisions that would greatly affect the people closest to them. Did you watch the last episode? If you missed it we have a full and detailed recap, right here for you.

On tonight’s show the officers of 15 Division have been assigned a thankless task: “helping” tenants move out of a condemned subsidized-housing complex and into a neighboring building. While checking on an empty unit, Andy and Chloe find a man who has been tortured and beaten unconscious, leading to the discovery of a ruthless criminal operation. Meanwhile, Nick and Gail arrest a pair of teenage siblings with secrets of their own, forcing Nick to divulge some of the darker truths of his own past.

On tonight’s episode of Rookie Blue, the officers are sent to clear out the tenants at a subsidized-housing complex. However, before they were given their lackluster task, they were told they had to wear their new equipment. Luckily it’s only temporary but the audio and visual device their forced to wear makes all of them feel uncomfortable. It’s like being spied on!

Typically things the officers would be willing to overlook – they can’t because they don’t want to be caught out. So they played it safe. And except for their minor skirmish between Andy and one of the unhappy residents – they were fine for the most part. Ted McDonald had had his bike stolen and was admittedly in a temper when he saw the police arrive to tell him and his neighbors to clear out. Hence he got aggressive with them and might have gotten into their faces to demand why there were focusing on the housing complex rather than do their actual job of helping him recover his stolen property.

Then in a moment of anger, after they tried to calm dim down, he grabbed Andy’s arm (almost like a reflex) when she tried to get his finger out of her face. According to the law, that’s assaulting a police officer, which is something none of the other officers that were with Andy appreciated.

Ted should have gotten arrested then and there, but Andy told her fellow officers to back down. That they could all choose to overlook what was clearly a regrettable action on Ted’s part. He was just angry and he didn’t think his actions through but as it turns out he wasn’t the only incident in store for the squad. The bike he had been raving over – the one he allegedly spray painted in an ugly orange in order to not attract thieves – was later seen in one of the apartments assigned to Gail and Nick.

A neon bike was kind of hard to ignore!

Though it is odd that these two seasoned officers didn’t pick up on the early warning signs. They had to stop by that apartment twice before they were able to pick up on anything being wrong and once they did they realized the two teenagers staying there had been living alone unsupervised for over a year and that they’ve been stealing bikes to pay the rent. Their mother had walked out one day and simply never came back. And since then they pretended she was always busy – they didn’t want to risk being separated in foster care and they were scared about getting sent to one of the notorious group homes kids like them always hear about.

Nick’s first thought was to give the kids a warning about staying out of trouble. He didn’t really want to file a police report yet that right was taken out of his hands because of the stupid device recording his every movement. So he took them in and when he realized placing them together was going to be hard – he concocted a plan B!

Nick filed charges against both the brother and the sister although it was only the brother committing the crimes. He knew if he did this then they would get sent to a co-ed home for troubled kids. And he knew just the place for them. He eventually took them to his old home – the one where he was sent to after stealing a car and getting into an accident. Nick knew his old foster mother would be good to and for these kids so that’s where he felt it was safe to take them.

As for Andy and Chloe, their search at the housing complex ended up with them becoming involved in a human trafficking case. It all started when the ladies came upon an unconscious man in one of the apartments. There was a second man at the scene but he fled before they could get any answers out of him. So naturally he was considered a suspect. At the time their only suspect seeing as they had no idea who the man that had to be brought to the hospital. His fingerprints were showing up in their database and he had no ID on him. With those odds, they might never have been able to identify their victim!

Then oddest thing happened – the suspect went to the hospital to check in on the unconscious man. As his story goes, the man lying up in the hospital is his brother Gabriel and he’s Aldo. They were both illegal immigrants from Brazil (that explains why he ran) and they came up here with a third brother looking for a better life. Though something appears to have gone wrong with their pursuit of the American dream.

Aldo refused to talk about where he and his brothers were staying and did not say a word about who beat up his brother so bad. Chloe for the most part acted as a translator between Aldo and the police, but she was called away for a time to handle her divorce papers from Wes. So while she reminiscing with her ex and ending her marriage with an awkward kiss – Andy thought to bring in someone else to help her with Aldo. They still needed to find out who attacked his brother and a sympathetic doctor that had been illegally giving the Silva brothers pain meds under the table sounded like a friendly enough face.

So Andy asked for her help and what she received was deception at its finest. Dr. Rita Paiva wasn’t a savior for the downtrodden. She was one of the people manipulating Aldo!

She only pretended in front of Andy at trying to get him to talk and unfortunately for Andy (she didn’t know a lick of Portuguese). Though she had a feeling something was off so she asked Chloe when she came back to review the footage her little gizmo recorded for her. In the video, Dr. Rita uses Aldo’s other brother Julio to intimidate him into keeping quiet. And by time the police found Rita at her office – she was shredding documents.

Rita and her husband who’s a contractor have been collecting illegal immigrants to work for them (at a low cost obviously) and reportedly moving them around every couple of months to throw off suspicion. But Gabriel and Aldo got tired of it. Of being treated as less than human and so they demanded the return of their passports and their brother Julio who they haven’t since they got to America. What they received was a beat down.

Rita and her husband were hoping that would teach them and everyone else for that matter a lesson about defying them yet after their little empire collapsed thanks to the tireless effort of the 15 Division – the Silva brothers were reunited and they even been talking to a representative for refugee status which they might get now that they’ve been documented survivors of human trafficking.

All in all it was a good day to clear a housing facility. It brought two very distinctive cases to the attention of the police. And it wasn’t a good day for Chloe. She lied to Dov about her divorce papers and then proceeded to cover up her kiss with Wes by tampering with the footage that’s supposed to be sent to her superiors (she forgot she had the camera on her). So despite everyone else getting the chance to go home with a little peace of mind – Chloe knows she did something incredibly wrong!