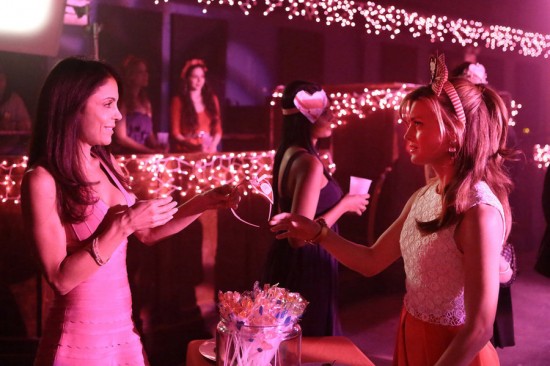 Tonight on USA Network ROYAL PAINS continues with its sixth season premiere called, “Smoke and Mirrors.” On tonight’s show Evan schemes to keep Hank in town in the Season 6 opener. Elsewhere, Divya tries her hand at motherhood, and a party guest has shocking news.

For those who are new to Royal Pain the series follows Hank Lawson, a young emergency room doctor, who after being wrongly blamed for an important patient’s death, moves to the Hamptons and becomes a reluctant “doctor for hire” to the rich and famous. When the administrator of the local hospital asked him to treat the towns less fortunate, he found himself walking the line between doing well for himself and doing good for others.

On tonight’s show after a winter abroad, Hank returns to the Hamptons to celebrate the latest addition to the HankMed family. Evan and Paige take a hands-on approach to their marriage. Later Evan hatches a plan to make Hank stay in town after a saxophone player falls ill. Meanwhile Divya experiences the joys of motherhood and a mysterious party guest brings surprising news for the Lawson family.

Tonight’s season 6 premiere looks like it is going to be great and you won’t want to miss it, so be sure to tune in for our live coverage of USA Network’s “Royal Pains” at 9:00 PM EST! While you wait for our recap hit the comments and let us know how excited you are for the season 6 premiere of Royal Pains tonight.

Evan needs his brother back!

Ever since Hank ran away from his practice on the pretense of helping Boris — he’s been pretty much MIA for anything having to do with his family or his friends. And, unfortunately, that includes Divya’s celebration for her daughter. The little girl was happily accepted by her grandparents and they’re throwing a huge party in her honor, but Hank wrote ‘maybe’ on his RSVP card. Most of his friends are taking that maybe to mean “no”.

But they’re wrong. Hank returned for the party and he wasn’t alone. It seems Boris also wanted to be there regardless of being injured. As Hank describes it, they were joshing around and decided to jump off a cliff into the ocean. Boris ended up breaking a few bones because of it though he didn’t let a little thing like an injury stop him from attending.

Actually, the only person that couldn’t make it was the baby’s father. The famous polo player didn’t want to risk his daughter’s life while he’s presently dealing with a new and somewhat scary stalker. Raffa thought if he stayed in his home country then maybe the stalker wouldn’t pursue Divya or the baby yet a mystery girl managed to worm her way into the party by easily playing both Divya and Jeremiah like a fiddle.

However, this stranger, Emma, isn’t eyeing Divya or the baby. Her focus appears to be on someone else entirely…

Still, Evan is being dramatic about Hank. His brother hadn’t abandoned per se – several months ago Hank had come back to the Hamptons. It was for Divya’s labor (just not the birth) although his brother did push him into taking on a young musician’s case while he was there. And afterwards, he flew back to be with Boris.

Evan couldn’t understand why. He felt that he needed his brother more than Boris and was hoping that at the end of Boris’s medical trial – he’d get his brother back. But Boris isn’t doing so well. He and Hank lied to everyone saying he was getting better when the truth is he’s losing bone density. Divya accidentally found out about it when she came upon the two men discussing Boris’s x-ray.

Divya won’t say anything. She’s not that type and Hank had asked her politely to keep it a secret so she’ll be mum about what she saw. And it’s not like there isn’t enough on her plate already. Divya has a new baby to look after and she quickly picked up on something being off with Emma. She and her friends soon realized that none of them had invited her.

Emma was then swiftly escorted off the premises by the security team.

As for Hank, the same musician from earlier Lance had trouble finishing his set and Hank had to step in. Lance thought he was suffering from Huntington’s disease when really he was suffering from a blocked artery. But because he had talked himself into fearing the worst — Hank knew the only way to help this young man would be to tell him if he inherited the disease from his father who had died from it.

And funnily enough Lance is going to be alright. Learning the truth was able to set him free!

Yet watching Hank helped a patient made Evan almost resentful of the time Boris gets. And he doesn’t even know the truth. Boris has Hank running around on sometimes false reports. He called Hank in the middle of Divya’s labor demanding he fly out to meet him. He claimed to have broken his leg and that was a lie – he was actively mobile all the while being on the phone.

That phone call made Hank miss the birth and honestly he doesn’t want to miss anything else. So Hank wants to stay in the Hamptons and he’s going to fight Boris in order to do so. But there is another reason why Hank should stay and it has to do with Emma.

Emma wasn’t a stalker. She came to Shadow Pond looking for her father and Divya decided to introduce her to Hank!
Is he her father, her uncle, or her brother? Three Lawson men have lived at Shadow Pond — there’s no telling who she was looking for!