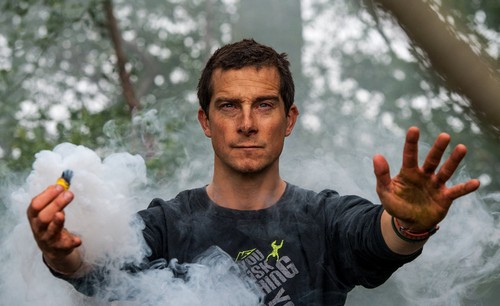 Tonight on NBC their new show RUNNING WITH BEAR GRYLLS airs with it’s premiere episode. On tonight’s episode called, “Zac Efron” Zac Efron joins Bear for a trek into the Appalachian Mountains in the series premiere of this show about celebrities testing their survival skills.

For those of you who are not familiar with the show, the famed adventurer and survivalist will take celebrities into the most remote and wild locations in the U.S. and around the world for a 48-hour journey of a lifetime.

Will Running with Bear Grylls be another huge hit for NBC? Well you’ll have to tune in tonight at 8PM EST and let us know what you think. We’ll be recapping all of the action right here for you. Hit up the comments and let us know your thoughts about this new show!

RECAP: Tonight Bear is taking out Zac Efron on his little adventure; Zac wanted to prove he has what it takes to survive in the wilderness.Bear meets Zac and wants him to explore his own limits, Zac is very excited and knows it’s going to be pretty crazy and it’s making him nervous. Zac sees a beaver in the water and is disappointed Bear isn’t there yet, sad that their possible meal got away. Bear lands and goes over to meet up with Zac, he”s given Zac all his gear needed to survive out in the wild with him. Bear and Zac now get on the helicopter together, flying off to another part of the woods. They will both parachute into the forest together,Zac jumps out of the plane and Bear follows behind him with a front flip.

Zac is and Bear both land on the ground safely; they are now heading into the forest together, they must cover 40 miles together; Zac decided to do the show since he has always been a big fan of Bear’s show and would watch it all the time. His dad and him always hiked and backpacked a lot, though they never did any of this survival stuff for real, he’s just so happy to be there.

Zac and Bear are now climbing down hill using the rope, they are now going to rappel down the side of this ledge; it’s very wet and slippery. Za c is nervous a bit and decides to follow Bear down.

Zac is now making his way down, he admits being a bit scared; knowing if his hand lets go he will fall down. HE wouldn’t like to do it again, though he now knows how; Bear admits that they are only easing Zac into it. Bear and Zac are going to live off the land, Bear asks Zac if he knew at a young age if he knew he wanted to be an actor and singer; Zac says he loved it as a kid and he loves the feeling of a rush. Zac Efron admitted the High School Musical really boosted his career and he believe he was really lucky; Zac thanks Bear for bringing him out and helping him just relax. Bear brings Zac over to a waterfall to rappel down next; Bear shows Zac the carcass of an animal stuck in the rocks; he’s going to reel Zac down to go see.

Zac thinks it’s a rabbit but when he picks up the body and throws it over to Bear it’s a ground hog; Zac and Bear now take a knife to the dead animal. Bear tells Zac to cut into the animal and take a a smell, Zac cuts the animal open and takes a smell and almost pukes. Bear says it was bad and throws it back into the water fall, Zac believes it’s one of the most disgusting things he’s smelled. Bear tells Zac to use mud to get rid of the smell on his hands; Bear spots a nest full of birds. They find some eggs, Bear decides it would be best to go look for worms. Zac eats the worm and believes it tastes like dirt, Bear goes for a huge handful of worms. Now the two go look for a camp.

Bear and Zac find a little cave where they can take shelter in; it’s a great place to stay since they don’t have to build one of their own. Bear and Zac start to make a fire. Bear is making a worm and egg mixture to eat for dinner; Zac says watching worms boil in eggs was gross.

Bear knows this meal is going to suck without a doubt, he takes the first mouth full and says it isn’t too bad; Zac now takes his first bite of the eggs and worms; he says the egg shell is weird and believes it was really bitter. Bears asks Zac about his early fame as a young man, Zac mentions his rehab and believes that his work was never a problem; just the social aspect because there is press everywhere. It really is confusing and he just stays home and once he cared less about work but wanted to go out more; though when some days were to hard to get through he got low. Zac never wants to always feel comfortable with himself and tries to make himself relax; he absolutely loves doing this with Bear because he thinks of nothing else. Zac thanks Bear for this opportunity.

Zac wakes up in the night and hopes that tomorrow will be an even more fun day, Bear is sleeping at the time. Bear goes ahead and is making some tea for him and Zac to start off their morning; Zac is a little sore after sleeping in a cave. Bear and Zac start of their journey; they reach this giant long rope across this big canyon; they need to crawl across the rope to get to the other side, Bear goes first and takes his time to get across. They now go ahead and pull the bags across.

It’s now Zac’s turn to cross the rope, he is super scared and nervous about it; he’s now taking his time going across it exactly like Bear did. He’s taking deep breaths; Zac loses his balance a bit and is struggling a bit. He turns himself around and gets right back on it; Zac can’t believe he just did that and he was not prepared. Bear tells Zac he can control his fear very well and knows it will serve him well, Zac mentions how he always has to get through his fears; it’s nothing but a challenge and wants to push himself past those limits. Zac loves being out in this moment with Bear, it makes him feel so free and calm.

Zac and Bear are at their extraction point but they need to go down a really high and steep cliff.

Zac thinks it’s too much for them; they take of their shirts and put them in their back packs to keep them dry. bear goes ahead and throws their back packs off into the water; they have to go down to get them. They are now going down slowly but surely side by side, the rope doesn’t even reach the water; Zac confessed he can’t swim and Bear says the water won’t be what kills him. The two drop into the water and it’s super cold, Bear and Zac now swim to shore to the extraction point. Zac says he’s never felt so alive and it beats every trip he’s ever been on and no movie tested him this much; he loved a lot. Bear says he really liked doing this with Zac, he’s a very humble person and incredibly fun to be with.