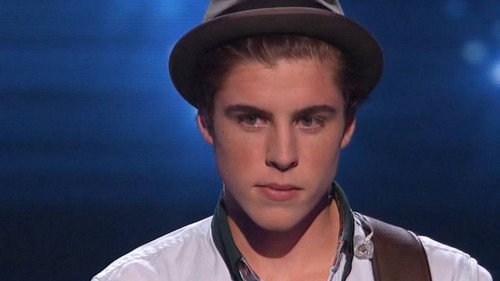 Sam Woolf sang, “It’s Time” by Imagine Dragons this week for his Country song choice.  Tonight we got double the performances from the Idol hopefuls as they sang both a Country and a Rock n Roll song in their bid for America’s votes.  Did you see Sam’s Country song?  If you missed it we have the video, right here. The Top 6 will really have to bring their A game tonight to stay around for another week, we expect a higher level of performances as the contestant pool diminishes as we head towards the May finale.  Did you watch tonight’s performance show? Just in case you missed tonight’s show we have you covered and you can read our full and detailed recap here!

On last week’s episode Sam sang “Sail Away”” by David Gray and Jennfer liked his rendition saying, I agree with Harry.  “As I was watching you here I didn’t feel as much, but when I looked down into the monitor and looked into your eyes I could tell you really were pushing and that’s what America sees at home.  Those are the feelings that are going to make that song real for everybody so in that sense I think you did a great job.”