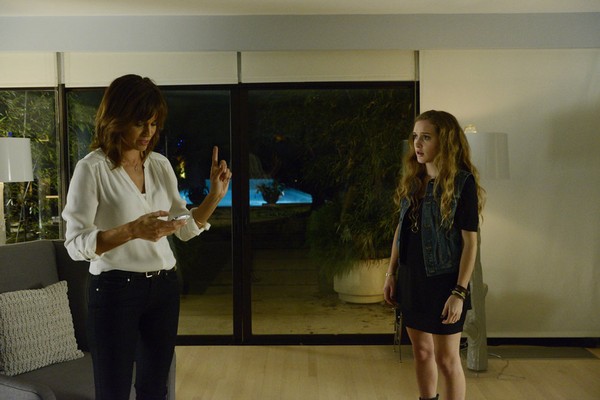 Satisfaction premieres on the USA network tonight with an all new episode called, “Pilot.” On this evening’s episode, we are introduced to Neil and Grace who search to find out what is missing in their marriage.

Satisfaction is provocative drama that explores modern marriage at its midpoint. Through the lens of one couple, Neil Truman (Matt Passmore, “The Glades”) and his wife, Grace (Stephanie Szostak, “The Devil Wears Prada”), this series answers the question, “What do you do when having it all is not enough?” by delving into their shocking and unconventional choices. The series is set to film in Atlanta, Georgia.

On tonight’s pilot episode Neil Truman is seen as he contemplates his life and marriage. While ideal on the surface, both Neil and his wife Grace feel there is something missing from their relationship, though neither can quite identify the problem.

Tonight’s episode looks like it is going to be great and you won’t want to miss it, so be sure to tune in for our live coverage of USA Network’s “Satisfaction” at 9:00 PM EST! While you wait for our recap hit the comments and let us know how excited you are for this new show.

The premiere of USA’s new TV show satisfaction begins with Neil Truman at the gym, running on the treadmill, and venting about his mundane job. He heads back to the office and attends a meeting. His boss wants him to travel to NY to try to land a pharmaceutical company. He snaps and tells his boss that he is an asshole, and his job is pointless. His boss laughs at him and clearly thinks he is joking, and brags that he can sell “ice to an eskimo.”

Neil heads home and finds his sixteen year old daughter playing the guitar. He breaks the news to her that he is going to miss her talent show tomorrow, because he has to go to NY. His daughter storms off. He heads out to the kitchen and tells his wife Grace that his boss Victor is sending him to NY to sign a new client. His wife is thrilled, she thinks it is great news. She has a present for him, a tie. It’s the same color as the one he is wearing, but she says the “color makes him look sexy.” He excuses himself and says he is going to go take a swim.

Neil heads outside and his pool is full of leaves. Later that night he lays in bed and tells his wife that he needs a vacation, on a beach somewhere, far away. He tries to kiss her, but she tells him she is tired and rolls over.

The next morning Neil heads to the airport for his trip to NY. The flight is full, there is only on working restroom, and they are delayed on the runway for over five hours. The stewardess refuses to even bring Neil a bottle of water. In a fit of rage Neil jumped out of his seat and opens the emergency door, and inflates the emergency ladder and jumps off the plane.

Airport security has a field day with Neil and puts him on a “no fly list.” After meeting with his lawyer Neil heads back to his office where his boss tries to get him to sign a statement saying that he was “off his meds” and issue an apology. Neil refuses to, tells his boss off, breaks the television in his office, and walks out of work.

Neil decides to surprise his wife Grace with the news that he quit his job. He heads to a house that she is supposed to be working on as an interior designer, and walks in. He finds his wife upstairs having sex with a stranger. Neil runs out of the house to throw up, and the guy that was having sex with his wife runs out after him and hops in his car to drive away. Neil jumps in his car and chases him. They end up in a fight in the middle of the street.

After the guy kicks Neil’s ass, he reveals to Neil that he is an escort, and Grace pays him to have sex with her. He gives Neil a pep talk and tells him that he has slept with a lot more married women than he would think, and Neil shouldn’t throw his marriage away over a few orgasms.

Grace has no idea that Neil walked in on her having sex. Meanwhile, he heads home and sits in his back yard by the pool. Anika is at the talent show preparing to go on stage and receives a phone call from Neil, he has her meet him outside and he asks if he can watch from backstage. Grace shows up and is shocked to see Neil because she though he was in New York. Anika rushes in to take the stage, and Grace asks Neil how come he didn’t call. He lies to her and tells her that his trip to NY was postponed.

After the guy kicks Neil’s ass, he reveals to Neil that he is an escort, and Grace pays him to have sex with her. He gives Neil a pep talk and tells him that he has slept with a lot more married women than he would think, and Neil shouldn’t throw his marriage away over a few orgasms.

Grace has no idea that Neil walked in on her having sex. Meanwhile, he heads home and sits in his back yard by the pool. Anika is at the talent show preparing to go on stage and receives a phone call from Neil, he has her meet him outside and he asks if he can watch from backstage. Grace shows up and is shocked to see Neil because she though he was in New York. Anika rushes in to take the stage, and Grace asks Neil how come he didn’t call. He lies to her and tells her that his trip to NY was postponed.

Anika shocks her parents and everyone in the audience when she takes the stage and begins singing a song she wrote about her math teacher and her science teacher having sex under the bleachers in the gym. Neil and Grace have to go to the principal’s office afterwards and learn that Anika is being expelled. Grace is furious and tries to get the principal to reconsider, but Neil thinks it is good she is being expelled and doesn’t think she belongs at the fancy private school.

Neil heads outside later that night to clean the pool, and finds Simon’s (the guy that was having sex with his wife) cell phone ringing. He answers the phone and pretends to be Simon, and a woman named Mallory tells him that she is waiting for him at the hotel he told her to meet him at. Neil tells Grace he has to go to work, and then heads to the hotel to meet Mallory. This is obviously the first time Mallory has ever met him, and she believes that Simon is Neil. He sits down at the bar with her and begins questioning her about why a married woman would call him for sex.

Mallory confesses to Neil that she has been married a long time and she loves her husband, but he is never around. Even when he is home he is on his laptop and ignores her. Mallory says she just “wants to feel wanted.” Neil heads upstairs and has sex with Mallory, and the next morning is woken up by his phone vibrating. He tells Grace that there is a new client at work, and they rescheduled his trip to NY.

Mallory gets up and gets dressed and leaves an envelope full of cash for Neil. She says she has to get home to her husband. Neil heads to a monastery to meet with a monk, he gives Neil a flower and tells him “all of your answers are here.” Meanwhile, unbeknownst to him Grace heads to his office to surprise him.

Grace heads to her friends’ house to confide in her about how Neil is MIA and lied about his job. They find the video of him going crazy on the airplane on YouTube. Grace takes his box of belongings from his office home with her.

Neil receives another phone call on Simon’s phone and heads to another one of his appointments. His next client is a woman named Adriana. She takes him as her date to an art gallery, she dresses him in a suit to impress her colleagues. Afterwards they head back to Adriana’s house and have sex all night. In the morning Adriana reveals to him that she owns an escort service and she wants Neil to come work for her. He declines her offer, but she tells him to come back whenever he is ready.

Neil finally heads home and finds his boss Victor sitting in the kitchen with Grace. Victor and Neil head outside to talk and Victor is impressed by his bold and crazy outburst. He offers Neil a partnership at his firm.

Victor leaves and Grace comes outside. He confesses that he didn’t tell her about his job because he didn’t want to worry her. She asks if their relationship is going to work out, and Neil hugs her. The next day Neil heads to work and Simon is waiting for him in the parking ramp. He knows Neil has his phone, and Neil has erased his contacts online. Simon threatens to “come after him” because his phone contacts were his livelihood. Neil threatens to turn him in to the IRS, because he is sure he isn’t writing “whore” on his W-2’s. Simon tells Neil to tell his wife Grace he says “hello.”

Neil heads home after work and has a family day with Grace and Anika. Grace heads in the house and says that she is going to make them some lunch before she gets in the pool with Neil. Suddenly Simon’s phone starts vibrating, and Neil realizes that Grace isn’t actually making lunch, she is trying to call Simon.