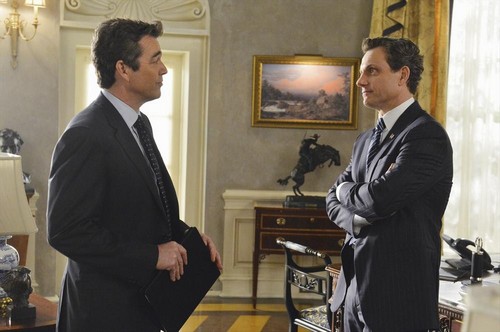 ABC’s SCANDAL sure has a legion of “gladiators’ waiting for tonight’s episode!  In “Kiss Kiss Bang Bang” Sally sets a meeting with the NRA which sends the White House into a tailspin. Olivia and Huck come to shocking realizations and a surprising person asks for help from Pope and Associates. Did you miss last week’s heart stopping episode? If so we have a detailed recap of all the action right here for you!

On the last episode Sally made it out of “No Sun On The Horizon” without a scratch, the same cannot be said for James and David though. Since Olivia ran back to Fitz and shot down Jake’s plan to run away together and “be in the sun,” Jake put all of his energy into being the best B-613 Command he could be. He sent Quinn into Olivia’s office during the debate and stole the file on Daniel Douglas’ murder, and proceeded to clean up all the loose ends.

He arranged a meeting between James, David, the reporter James had been leaking formation to, and the woman that transcribed the incriminating text messages between Cyrus and Sally. While they all stood in the middle of the street trying to figure out who called the meeting, Jake ambushed them and fired three gun shots. He took out the reporter, the transcriber, and… either James or David Rosen.

Tonight’s episode of Scandal picks up where we left off last week, Jake is standing in the street holding James and David at gunpoint. James tries to run away, and Jake shoots him dead.

The next morning Olivia is tending to Cyrus who is in complete shock. Olivia calls the White House doctor to come check him out. Cyrus has a flashback of the first time he met James in a bar, and slammed an article of his.

Olivia meets with Fitz and Millie, and informs them that Fitz needs to temporarily suspend his campaign. Langston calls him and lets him know that they will suspend their campaign as well out of respect.

At the press conference Olivia notices that Chandler and Shelby Moss’s seat is empty and puts two and two together that David may not have been killed in a car-jacking. Abby rushes out to find David, afraid that he may be in danger as well. David tells her that he is “running lead” on the case and reassures her that David’s death was random. He tells her not to “make it into something it isn’t” but Abby isn’t buying it.

Olivia calls Jake and reveals to him that she thinks James was killed because he knew about Daniel Douglas, and asks him to look into. Jake says he is “in the middle of something,” he is actually burying the other two people he shot last night in a grave in the middle of the woods.
Olivia heads to Cyrus’s office to check on him and he is having a mental breakdown. He is furious that Langston is meeting behind their backs and trying to secure the gun lobbyists supporters. Olivia tells him he is relieved of his duty, but he doesn’t want to hear it. Cyrus has another flashback of he and James on an airplane.

Meanwhile B-613 has found a fall-guy, someone who only has 6 months to live because their liver is failing. They bring him in after an anonymous tip, but David is the lead on the case and he refuses to make a formal arrest yet, he says it is too early.

Cyrus is pacing around his office having flashbacks of the first time he and James kissed. Fitz arrives and Olivia and Fitz puts together a scheme with Cyrus to get to the gun lobbyists before Langston does.

Meanwhile Marie Wallace is meeting with a couple of terrorists to broken an attack for a very rich woman.

Huck pulls security footage from Olivia’s safe and realizes that Quinn stole the Daniel Douglas file, and B-613 knew everything. Olivia storms into Jake’s office and accuses him of killing James and the two reporters, he confesses, and claims he made the call because it “needed to be done.” Olivia accuses him of being “just like her Father.”

Cyrus returns to his office and it is filled with condolences flowers. He has another flashback of he and James arguing in his office about why he hasn’t told Fitz about his relationship with James. He takes one look at the flowers, and storms back out of his office.

Jake pays David a visit and wants to know why he hasn’t arrested Lance (their fallguy). David tries to explain that there is a lot of red tape. Jake tells him that he gave him a suspect and he better use him.

Olivia meets with her Dad in the park, he asks her what she needs and she says “I need my Dad.” She tells him that she doesn’t understand the point of “democracy, patriotism, and freedom if everyone is evil and no one is worth saving.” Olivia explains to her Dad that Sally murdered Daniel, so Jake murdered three people including Cyrus’s husband to cover it up. Her Dad already knew all about it though. Her Dad confesses to her that he is “responsible for killing 183 people.” He says that when you are in charge it is your responsibility to choose who lives and dies, and play the hands of God. That was his responsibility. And, now it is Jake’s responsibility. He explains to Olivia that there is no sense punishing Jake, because being the “Hand of God” is punishment enough.

Meanwhile Andy is at the gun range with Millie trying to secure some of the gun lobbyists support. They are still leaning towards Langston, but if Fitz gives a White House speech supporting the 2nd Amendment they will support him instead. Fitz doesn’t like the idea of supporting guns when Cyrus’s husband was just shot. Fitz and Cyrus decide this will be the perfect opportunity to switch sides and oppose guns without looking like “flip-floppers.” Cyrus has another flashback about the first time he ever told Fitz he was gay and was dating James.

Fitz gives a speech and says he will not stand by and support the gun lobbyists after James Novak was just gunned down. Millie and Andy kick back and get drunk and argue about the 2nd Amendment. Andy tells Millie it is a “shame that Fitz can’t see her the way he does.” They start having sex on the floor.

Abby heads home to check on David, she is concerned that he is home from work so early. She accuses him of lying to her, and demands that he tells her the truth about what is going on. He confesses he has to send an innocent man to jail for a crime he didn’t commit, but that is the price he has to pay for staying alive. He confesses to Abby that James, Chandler, and Moss were shot right in front of him.

Huck sneaks in to Quinn’s house to kill her. He pins her against the wall and says that he realized she wanted to be seen on camera, and she still has some Gladiator inside her, she spits in his face and he kisses her. Then Quinn tells him to get out, so he leaves.

Olivia meets up with David and tells his to arrest the fall-guy Lance. David insists that it is wrong, but Olivia orders him to make the arrest. She tells him to lose this battle and then she will help him win the war against B-613.

Olivia reveals to Cyrus that Lance has been arrested and reassures him it was a carjacking. Cyrus insists on giving the press conference, even though Olivia tries to stop him. Cyrus finally breaks down at the podium and sobs in front of the entire room of reporters. Ethan gets Cyrus off the podium, and Olivia pulls it together and takes over.

Jake sits in his office watching the press conference, and has a flashback. After he shot James in the middle of the street he was still alive, Jake knelt down and told him he was sorry that it was going to be so painful and messy when he died, but he had to make it look like an amateur did it. He sat with James in the middle of the street until he died, and promised him that his daughter was safe.