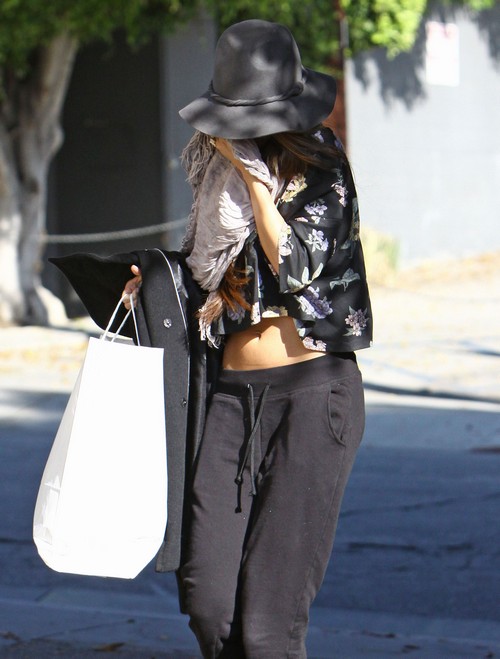 Selena Gomez has always been one of the few Disney stars that’s shied away from controversy, but has that changed? She recently cancelled her tour, and although she claims it’s because she needs time off, many reports claim it’s because she’s suffering from partying too much. While I don’t necessarily believe that, it’s certainly possible that Selena is being influenced by the young Hollywood crowd around her. The latest report from the National Enquirer suggests that Selena has started taking molly, and was spotted by eyewitnesses doing so at a private party in Hollywood Hills over the last few months.

A source tells the Enquirer, “Justin Bieber was at the same party, but I didn’t see him using drugs that night. I was more focused on Selena because, up to that point, I didn’t know she took drugs. But she clearly knew what she was doing. This certainly wasn’t her first time rolling.”

The report claims that her recent drug use is tied into her ‘bizarre’ behavior, which apparently includes cancelling her tour at the last minute.

Considering that Selena has never publicly taken or endorsed drugs in the past, and has a pretty pristine public image, I think we should give her the benefit of the doubt. First of all, the report is from the National Enquirer, so the chances of it being true are already next to nil. Also, the source claiming that they saw Justin Bieber at the same party yet didn’t see him take any drugs doesn’t ring true. Lastly, if Selena were ever to start taking drugs on a regular basis, the media would know. There are enough handlers and reps around her that it would be common knowledge, just as it was with Demi Lovato.

What do you guys think? Did Selena really take molly? And if she did, should it be a big deal, especially if it was a one-time thing? Let us know your thoughts in the comments.