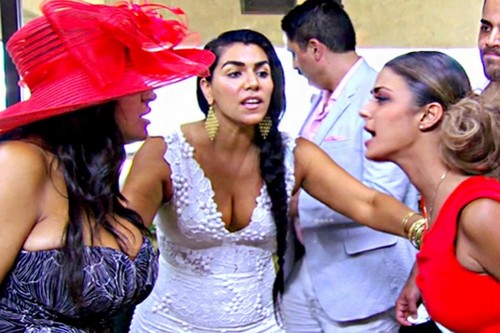 Tonight on Bravo SHAHS OF SUNSET continues with a new episode called, “The Buttery, Chocolate Croissant.”  On tonight’s show the girls conspire to bring Reza and Mike together for a fun day at the races that they hope will inspire them to kiss and make up..  Did you watch last week’s episode?  We did and we recapped it right here, for you.

On last week’s episode MJ tried to salvage some risqué personal videos she deleted from her computer, while still pursuing a business and personal relationship with GG’s sister Leila. Mike met up with questionable friends to pursue a business opportunity while his mother applied pressure to ‘put a ring’ on Jessica. After her recent break-up, GG tried to date the hottie that she made out with at Lilly’s party. Asa prepared for the debut of her Diamond Water with a glamorous, celebrity studded launch party, but was totally unprepared for the blow up that happens when Reza and Mike see each other in person for the first time since Club Noor.

On tonight’s show Asa brokers a tentative peace between MJ and GG, and the girls conspire to bring Reza and Mike together for a fun day at the races that they hope will inspire them to kiss and make up after the Diamond Water blowout.

Tonight’s episode of Shahs of Sunset opens with Mike and Jessica waking up, the day after Asa’s Diamond Water party. Jessica fills him in on how crazy he acted at the party, and told him he was crying in front of everyone. Mike is shocked, and embarrassed.

Asa is trying to mend fences between MJ and GG before their trip to Turkey. She has invited them over to her house for lunch. They both arrive, and try to be on their best behavior, but it is super awkward. Asa tells them she is “tired of their weird frienemy bullshit” and she wants them to work it out. Asa thinks that MJ was wrong to take GG’s side and bring her to the party. GG confesses that she is “a little aggressive at times.” MJ apologizes and GG accepts her apology.

Reza and Asa head to yoga, and the yoga instructor gives Reza a little pep-talk about forgiveness. After yoga Asa invites Reza to the horse races. Reza agrees to come, and states that he “has to fix” things with him and Mike, because he “loves him too much.”

Lily is cleaning out her closet and having a closet sale, she is donating all of the money she makes to charity. Her friend has Menoushah has come over to help her get her clothes together for the sale. She tells Lily that she has “foot boogers” in her shoes. Lily reveals that Asa has invited her to go to Turkey with all of her friends, but she is scared to go because MJ hates her.

Lily heads over to Asa’s house, Asa invited her over to teach her how to cook. Lily has no idea how to cook. Lily isn’t impressed, she’s not a fan of “massaging raw meet.” Lily doesn’t understand Asa doesn’t ever go to Iran. Asa and her family are refugees of the Iran War. Asa is convinced that if she goes back to Iran she will “disappear and never come home.” Lily tells her “it’s not that scary.” Asa is getting upset, Lily obviously doesn’t understand what refugee means.

Mike is at the liquor store picking out a bottle of wine to give to Reza as a peace treaty. GG, MJ, Reza, Mike, and Asa pile into a Rolls Royce to head to the race-track. Reza thinks they are off to a good start because Mike is sober. They pop open the bottle Mike bought, and began pouring drinks while they ride to the track. Asa asks Mike if he is coming to Turkey and he says “yes.” Mike and Reza begin talking about their argument. Reza brings up what Mike said about MJ, he said he wasn’t “weak like her.” MJ flips. Everyone is trying to get along, and now MJ is upset.

They stop at Starbucks on the way to the races, and Mike tells MJ she “doesn’t need a chocolate croissant.” To add injury to insult, he point out that she had cookies and a bag of chips the day before.

The group finally arrives at the race-track, and head up to their private box. One of MJ’s clients owns the box, and invited her and her friends. Mike and Reza are getting along great, and Reza confesses he “missed his friend.” MJ, GG, and Asa are picking out horses to bet on.

MJ’s client takes them down to the horse stalls to meet his horse, and they all place bets on his horse. Then, he loses. Bummer. Meanwhile MJ is cuddling up close with a man named Alex that they met there. After Alex leaves, MJ turns into a hot mess. She is still upset that Mike called her fat. She accuses Mike of taking too many steroids, and being Reza’s puppet. Mike and Reza decide to have a heart-to-heart. While Mike and Reza are trying to talk, MJ is yelling over them and trying to turn Reza against Mike again. Reza takes Mike out in the hallway to talk in public, they hug it out and bury the hatchet. Mike confesses it’s hard to “stay mad at Reza’s mustache.”

Reza heads back into the room with Asa, MJ, and GG, but MJ isn’t done. She declares that now she isn’t forgiving GG. GG tells her to “shut the f—k up.” GG has had enough of MJ and her drama, and she thinks “MJ is being a complete d—k.” Drunk MJ is actually accusing GG of drunk. GG flips out and knocks MJ’s ugly red hat off from her head. MJ calls her a “drunk piece of s—t.” Asa is mortified, she wanted everyone to kiss and make-up. MJ has successfully pushed GG’s buttons. Reza drags MJ out of the room to separate her from GG. MJ declares she is “not going to Turkey with that whore.”

Asa gives GG a pep-talk and tells her to calm down. Mike thinks that MJ has no excuse for her behavior because she is forty years old. Asa is concerned with MJ, she thinks there is something wrong with her today. GG declares she “already has one sister that stabs her in the back, she doesn’t need another.”