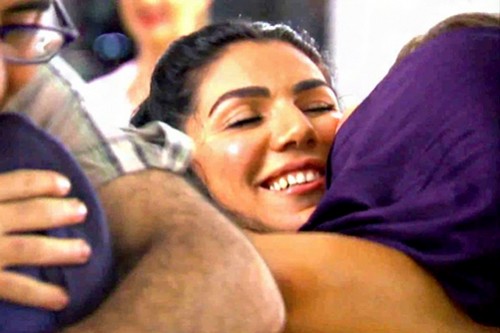 Tonight on Bravo SHAHS OF SUNSET continues with a new episode called, “Return to the Homeland Part 1.”  On tonight’s show the whole gang embarks on a vacation to Turkey to take part in Asa’s family reunion.  Did you watch last week’s episode?  We did and we recapped it right here, for you.

On last week’s episode after the debacle at the race track, MJ exacted her revenge on GG by crossing the line with GG’s parents. GG called her sister out for blindly siding with MJ after the incident, and while the rest of the gang prepped for their big trip to Turkey, Reza and Lilly had a fateful conversation that led to an unexpected end.

On tonight’s episode despite simmering tensions, the whole gang embarks on a vacation to Turkey to take part in Asa’s family reunion. While touring around the old city, Mike has a startling realization outside the Blue Mosque, and Reza wrestles with his identity as a gay man in a neo-Muslim country.

Tonight’s episode of Shahs Of Sunset kicks off with the Shahs crew en route to Turkey to Asa’s family reunion.  MJ, Reza, Asa, GG, and Mike arrive at the hotel in Turkey.  They freshen up and head out to a Turkish restaurant.

MJ and GG have managed to set aside their differences, kind of.  MJ is upset that GG called her a “tub of lard.”  Mike defends GG though, because MJ started the war when she called Golnesa’s parents and told them she was a “dirty whore.”  Mike tries to get MJ to apologize for calling Golnesa’s parents, but she refuses.  Reza, Asa, and Mike try to be the voice of reason and get them to work out their differences, but it doesn’t look like it is going to happen.  MJ and GG agree to “co-exist” while they are in Turkey.  MJ finally caves and apologizes for everything that happened with Sean and with her parents.  GG is shocked that she is finally saying she is sorry.

The next morning the Shahs gather around for breakfast, and Asa has a day full of sight-seeing planned for them.  She rushes them off to Istanbul to visit the Turkey tourist attractions.  Reza, Asa, GG, and MJ love visiting Turkey because they feel like they are “connecting with their culture.”  Mike doesn’t feel it though, he is Middle Eastern, but he doesn’t feel like he has any ties to the country.  Asa is shocked that Mike doesn’t “feel anything.”  Mike actually feels out of place, since he is Jewish.

The group heads to the Blue Mosque, and coincidentally they arrive during “prayer rush hour.”  While they begin praying in Islamic over the loud-speaker, Mike and Reza walk away.  GG is blown away by the prayer and begins crying.  Reza is freaking out though, he is scared that if the Islams in the Mosque knew he was gay, they would “throw rocks at him.”  Mike is scared, his parents were kicked out of the country because his family was Jewish.

Mike and Reza want to leave, but Asa, GG, and MJ are upset.  They want to go into the Mosque, and they don’t understand why Mike feels uncomfortable.

Reza, Asa, GG, and MJ head into the Mosque while Mike waits outside.  Asa is shocked that they won’t let women pray in a certain area of the Mosque, the women are supposed to go to the back corner.  Reza gets to go through, and he is gay, but they won’t Asa through.  Aas is not happy.

Asa meets up with her Mom, and they head to the Turkey market.   Asa can’t wait for the rest of her family to join them in Turkey for the reunion.  Asa’s Mom confesses to her that she wants to visit their native country Iran, but she can’t because they are refugees, and they aren’t allowed back into Iran.

Asa and her Mom head back to the rental apartment Asa got for her family.  Their loft is on the 54th floor, overlooking Istanbul.  They decide to prepare some food for when their family arrives.  MJ, GG, Reza, and Mike join Asa and her family at their lost.  Asa’s long-lost Aunts, Uncles, and Cousins begin to arrive.  Asa and her family pass out gifts to each other.  It is Iranian custom to bring gifts to your family when you travel.

Asa lays down on the floor and drapes herself with Iranian blankets and dirt her family brought her from her homeland Iran, and takes a trip down memory lane.