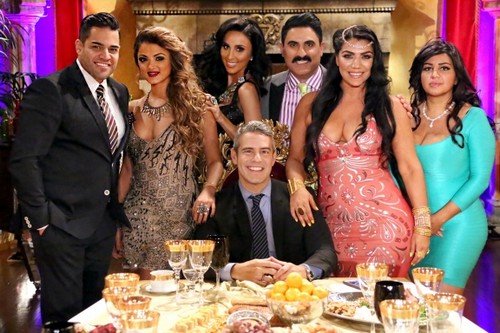 Tonight on Bravo SHAHS OF SUNSET continues with a new episode called, “Reunion Part 1”  On tonight’s show Bravo caps off the explosive third season of Shahs of Sunset with the two-part reunion.  Did you watch last week’s episode?  We did and we recapped it right here, for you.

On last week’s episode GG and MJ went to visit a doctor about freezing GG’s eggs, and MJ and her Mom’s birthday spa date went horribly wrong. Reza planneds a getaway for everyone except Lilly to Palm Springs at a private mansion where he unveiled a big surprise about his future.

On tonight’s episode Bravo caps off the explosive third season of Shahs of Sunset with the two-part reunion when Reza, MJ, Mike, Lilly, Asa, and GG all sit down with Andy Cohen for the ultimate Farsi face-off.

Tonight’s episode is going to be filled with more crazy Shahs Of Sunset drama that you won’t want to miss, so be sure to tune in for our live coverage of the show tonight at 8 PM EST! While you wait for our recap hit the comments and let us know how excited you are about the new season of The Shahs of Sunset!

The Shahs of Sunset Reunion Part 1 kicks off tonight with the ultimate Persian dinner party with the cast of Shahs and host Andy Cohen.

They kick off the night by toasting to Reza’s engagement, and then Andy asks Mike why he still isn’t engaged. GG confesses that she was shocked, but kind of sad it wasn’t her that was getting married.

Andy asks the Shahs which cast member they think is “the best in the bed.” Lilly says definitely GG, because she has had a lot of practice. Reza thinks MJ is the best cast member in bed, because he has seen her sex tapes.

There happens to be a buttery chocolate croissant at the dinner table, which brings up MJ and Mike’s latest feud. Mike apologizes to MJ for when he told her she didn’t need any croissants, and tells her that he loves her.

Andy brings up Lilly’s prom theme birthday party, and how “over the top” it was. Lilly was happy with the party, she doesn’t care if it was “over the top” it was her birthday. GG admits that she definitely had fun at GG’s party, she cheated on her boyfriend with the guy that Lilly crowned the “most eligible bachelor.” Reza confesses that he couldn’t have a good time because MJ wasn’t there. MJ still doesn’t understand why Lilly wouldn’t let her come after she texted her and apologized for forgetting to RSVP. Andy asks the Shahs which party they enjoyed more, Lilly’s birthday party or Mike’s brother’s graduation party? They unanimously agree that the graduation party was more fun. Lilly confesses that she doesn’t see the rest of the cast as her “true friends” and that’s probably why they didn’t have fun. Andy asks Lilly how she ended up in the “not friend zone.” Asa thinks the reason they aren’t friends anymore is because Lilly didn’t put any energy into their friendship, it was one sided. Lilly explains that the reason they aren’t friends is because nothing she ever does is good enough for them to consider her a friend. She says the Shahs clique is “like Mean Girls” and they won’t let her in. They think Lilly is fake, and she doesn’t want to be friends with them, she just wants to be on Shahs Of Sunset. Reza confesses that if Lilly “can keep it real” and reaches out to them, he would try to create a friendship with her.

Andy wants to discuss MJ ratting out GG to her boyfriend, MJ confesses that she did “break Girl Code.” But, she did it because GG was being reckless. GG says that it was none of MJ’s business how reckless she was being, or who she was hooking up, it wasn’t her place to tell Sean. MJ agrees that she should have apologized to GG sooner, like on the rafting trip when GG asked her to apologize multiple times. MJ apologizes to GG during the reunion for ratting her out to Sean and breaking Girl Code.

Andy points out that GG has come a long way dealing with her anger, and the rest of the Shahs cast agrees, except MJ. MJ thinks it is funny that people actually think GG has changed.

Andy wants to know what happened between GG and her sister Layla, they had finally buried the hatchet, until MJ came along. GG confesses that she is still furious at her sister Layla for hanging out with MJ when they were fighting.

Andy brings Layla out and has her join them at the dinner table to discuss her issues with Layla. GG explains that her sister Layla is a “fame-whore” and “she doesn’t associate with fame-whores.” Layla and GG get in a screaming match over whether or not Layla is begging to be on the Shahs of Sunset, and is trying to steal her thunder. Andy finally interrupts their argument and makes them each say something nice about each other, and then Layla leaves the dinner table.

Andy addresses the business partnership, or lack of, between Reza and Mike. Reza points out that he agreed to work with Mike, but Mike didn’t want to work. MJ agrees, Mike was looking for a get rich quick scheme. Mike thinks that Reza is a backstabber and miserable and broke. Mike confesses that he still loves Reza “like a brother,” he just can’t trust him.

Reza declares “there will always be a gap between him and Mike forever more.”