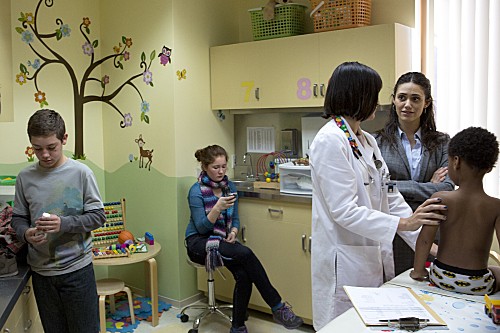 Tonight on Showtime their fiercely engaging and fearlessly twisted series SHAMELESS airs with a new episode called, “My Oldest Daughter.”  On tonight’s episode Lip seems to have lost his mojo as he struggles in school and with the ladies.  Did you watch last week’s premiere episode?  We did and we recapped it right here.

On last week’s show as we caught up with the Gallagher clan, Fiona is dividing her time between caring for the household and working at Worldwide Cup with her boss/boyfriend Mike Pratt. While her job and relationship are going smoothly, life at home is thrown into a state of upheaval with the reappearance of a drug-addled and deathly ill Frank. With Lip off at college and Ian still missing, Fiona attempts to connect with Debbie and Carl, who are dealing with the upheaval of their adolescent hormones (or lack thereof).

On tonight’s show Fiona begins to enjoy the perks of living life just above the poverty line. She uses her newly activated health benefits to take the kids for checkups. However, when a road rage incident damages the company car, Fiona tells a much bigger lie about how it happened. Meanwhile, Lip seems to have lost his mojo as he struggles in school and with the ladies.

Tonight’s Shameless season 4 episode 2 is going to be great, and you won’t want to miss it. So be sure to tune in for our live coverage of Shameless — tonight at 9 PM EST!  While you wait for our recap, hit the comments and let us know how excited you are about the new season of the Shameless?

RECAP: Fiona is at the doctors with her little brother, along with Debbie and Carl being there. Carl is up next to be examined, Debbie talks to the doctor about wanting to be on the pill, but she can’t and fusses about it being unfair. Lip is at work him and his fellow employees are gambling with food, right after Lip wins he leaves to go study. Frank wakes up at home, he takes a leak in a Gatorade bottle and begins to try and consume alcohol the weirdest way possible, by putting drops of it in his eyes… not the smartest idea. Lip is in his class taking a test; he doesn’t look like he’s all there. Victoria and Kevin are working in the bar; they are listening to Stanley’s will. Stanley left his daughter his gun collection, he then leave Kevin his bar. Kevin asks if Alan is okay with taking the bar, he’s fine with it as long as Kevin sends him $500 a month for the next two years. Alan takes his father’s ashes urn and smashes it on the ground; you can see they weren’t too fond of each other. Fiona visits her boss; he asks her if everything was alright last night. He wants to talk about how he wants to put her out on the field today, he wants Fiona to become the new sales rep. She’s also being given a company car. Lip is chilling in his dorm smoking while looking over his test, his roommate tells Lip about a part before he leaves. Victoria cleaned up the ashes; Kevin gives a speech about Stan over the garbage bin his ashes were placed in. Victoria is throwing out the trash and will be going home since she’s feeling under the weather. Victoria tells Kate that she’s got a new boss, who’s now Kevin. Kate is surprised that Kevin actually wanted to have the bar, since it’s not the greatest of places. Frank wakes up feeling itchy, his entire body is veiny and he’s getting horribly sick. Frank’s liver has finally given out due to all the alcohol he’s been consumed, he shows the spider veins on his chest to Carl and his bloodshot eye.

Frank is going to stop using alcohol; he wants to take drugs instead and asks Carl to go get him some. Carl is on the job to find his father drugs; his dad says he’s proud of him. Carl then leaves. Debbie is hanging out with her friends, she talks about how she’s going to be going over to who recent boyfriend’s house. Her friends talk about how this is the perfect time for them to have sex, she mentions how she’s not ready for that. Fiona is driving the company’s car; her boss calls her to finish their conversation this morning. He wants to ask about why she didn’t call last night when she said she would. He’s being a little bit clingy. Lip walks into school for the tutoring, he meets a girl outside who’s also waiting for the tutoring, and her name is Shelly. Turns out that Lip was talking to the girl who’s going to be his tutor. Carl asks Victoria if she’s got any sorts of drugs, Victoria wants to call Fiona to make sure it’s fine for Carl to have them. Victoria needs to head to the hospital she could be losing a baby, she takes Carl with her. Kevin and Kate are going over the finances and what not for the bar. Kevin receives a call from his wife going to the hospital. Fiona Is talking to Leonard about how to make his business better. Lip is trying to study, but he keeps getting distracted by Shelly, don’t blame him she’s extremely beautiful. Lip invites Shelly to a party; she’s already going to the party. Victoria is in the hospital she’s started “spotting”, she’s waiting for an ultra sound; Kevin enters and tries to comfort his wife. Carl is now in the hospital looking around, he takes the elevator to go up, he goes up to a lady to ask about getting a liver since his is ruined. Carl is talking with the lady at the organ donor center; he’s going to go check the blood types from his siblings to see if they’re a match to help give a part of their liver to Frank. The doctor walks in with an ultra sound machine, turns out that Victoria is going to be having triplets. Kevin is extremely happy about having triplets; he’s going around how he’s got magic below his waist. Fiona is in her car singing, when she’s interrupted by her boss who’s calling about how the clients really like her. Leonard wants to order the cups, he’s impressed with her. Now he wants to talk about her not calling last night, he’s mentioning how it’s only because he cares about her. Carl calls Fiona to ask about her blood type, because she can help Frank with his liver problem. Fiona is getting pissed off with the driver who was behind her who was honking his horn, she pissed him off and the guy comes out with a bat and smashes her vehicle. She backs up and drives off with her windshield cracked. Lip is at the party, he’s looking around for Shelly and he finally finds her, he sees her and talks to her. Shelly wants to talk to a guy, but asks Lip how to do so and that she can’t be with him for being his tutor.

Carl calls Lip and asks him for his blood type, Lip says he’s AB+ and that Frank is dying. Carl wants to get a liver for Frank; he’s disappointed that none of his family members want to help him out. Debbie exits a train and not looking to comfortable. Carl walks in to wake up Frank, he got his dad some drugs, and Carl wants to get a sample of his father’s blood. Carl is going to try and get his dad a liver. Lip is walking around the party and finds Gus’s older sister. He asks about how Gus is doing and it turns out he’s still doing time, Gus is talking to her and he finds out that she’s going to the same school as him. They talk about how things are going for them, Lip asks if she wants to go with him to get high and have sex. She’s not happy with him at all, Lip doesn’t look like he’s taking it well, he finds a girl who looks somewhat interested in him and he ends up having sex with her. They finish and she leaves, he’s left feeling confused. Fiona gets back to work and talks to her boss telling him the windshield broke, he questions her not saying anything on the phone about it. He says that he’ll make it up to her and drive her home. Carl makes it back to the organ donor center to check if his older sister has the same blood type as her father. Debbie makes it to her boyfriend’s house, she asks if his parents are here; turns out that it’s his place and his parents live elsewhere. Turns out that her boyfriend is twenty years old, Debbie admits that she’s only thirteen years old and he looks like he’s a bit in disbelief. They end up eating dinner and watching TV, he doesn’t seem to mind that she’s thirteen. Victoria wants her mother to get an abortion because she’s got triplets. Kevin isn’t making as much money as he thought he was going to make with the bar, Victoria wants her mother to have an abortion because they can’t afford to feed four children. Lip decides to blaze it up outside alone in the snow, he looks pretty pathetic at this point. Fiona arrives home, but before she leaves the car her boss asks if she was telling the truth about what happened with the car windshield. Fiona lied about the car, her boss knew the entire time about the car. He wants Fiona to promise not to lie anymore, he likes her a lot, but he can’t handle it when people lie in a relationship. She promise to try not to lie anymore, Debbie arrives home at the same time. Debbie ends up running up stairs not talking to Fiona. Frank and Carl are sitting in the living room watching TV, Carl says that Fiona has the same blood type as Frank and she can donate a part of her liver for Frank. Fiona doesn’t want to help Frank, because he drank himself to this point. Frank says that it’s fine he’ll get his oldest daughter Samantha to donate a part of her liver to him instead.