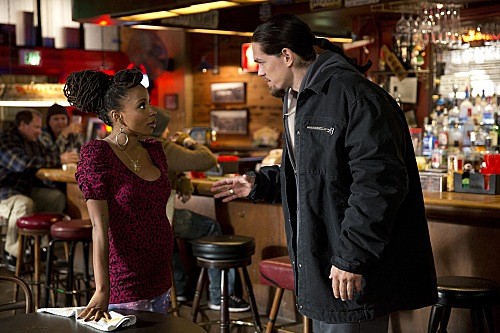 Tonight on Showtime their fiercely engaging and fearlessly twisted series SHAMELESS airs with a new episode called, “Strangers on a Train.”  On tonight’s episode Frank attempts to contrive an “accident” that will provide an ample insurance payout to cover the cost of a potential transplant.   Did you watch last week’s premiere episode?  We did and we recapped it right here.

On last week’s show Frank stalkd his previously unseen daughter, Sammi, and was surprised to find out she has a son, Chuck. Meanwhile, Fiona and Mike were getting serious. Also, Carl began stealing dogs and holding them for ransom so that he could earn some drug money for Frank. Sheila had her first successful online date with Native American cowboy Roger Running Tree.

On tonight’s show against her better judgment, Fiona continues her secret affair with Robbie. The situation nearly boils over when Mike shows up at Robbie’s apartment while Fiona is inside. Fiona is able to hide just in time before her infidelity can be exposed. Frank, in increasingly dire health straits due to liver disease, attempts to contrive an “accident” that will provide an ample insurance payout to cover the cost of a potential transplant.

Tonight’s Shameless season 4 episode 4 is going to be great, and you won’t want to miss it. So be sure to tune in for our live coverage of Shameless — tonight at 9 PM EST!  While you wait for our recap, hit the comments and let us know how excited you are about the new season of the Shameless?

As the episode opens, Fiona is on the L train as Robbie gets on, sits next to her, and proceeds to try to get it on with her! After a brief encounter where Fiona gets off, Robbie gets off as well and slowly walks away. Vee later tries to talk sense into Fiona by bringing up some past indiscretions. Fiona’s attempts to spend quality time with her younger siblings falls flat. Robbie continues to tease Fiona by texting her and reminding her of their passion and chemistry. Though she tries to make him stop, deep down, she feels the chemistry too and cannot get away. She shows up to his place to tell him to stop contacting her. They end up in bed, and soon after Mike arrives for a visit. Fiona grabs her clothes and hides in the kitchen. After Mike leaves and Fiona heads out, Robbie infuriates her when telling her he needs to take a call from his girlfriend. Vee calls Fiona on her denial of being attracted to Robbie.

Frank is told he will have to be waitlisted for his liver transplant because he has no health insurance. As he finds out the high cost and long wait involved, Sammi comes out from her room at the hospital planting a big kiss on him as the doctor looks on in horror. Franks explains, My daughter and I are very close.”

Frank starts to plot a big accident upon the suggestion that Sheila has coverage on her home for any major accidents. Off to visit Sheila, when she fails to answer the door, Frank begins plotting his fall by lifting off a stair in the front of the house to intentionally trip on. With both himself and his plan falling flat, Frank asks Carl to break his leg. When that doesn’t work, Carol devises a plan that will get Frank to relax so he can attempt to do the damage himself. He jumps from a ladder while Frank sleeps right onto Frank’s knee. Frank goes to see Sammi. She tells him that they are not a match and she cannot be considered for the transplant. As Frank yells about how upset he is over the fact they don’t match, he blurts out that he is her father. She screams at him threatening violence until he leaves, and throwing him out on his ass.

Lip shows up late to his midterm late due to a laundry accident. After his professor does not allow him to enter the exam after it started, he seeks the help of the Dean. He begs for a second chance to take the exam. The Dean does not give in and Lip proceeds to walk out of his office and go wild breaking windows on several cars, then finally running away from security. He ends up coming to visit Mandy to tell her he misses her. They end up in bed after Lip finds out her boyfriend is not there. After sharing her worry about the possibility of getting pregnant and asking for money for the morning after pill, Lip encourages her to roll the dice and see what happens. He tells her he may not want to stay in college and maybe they can have a little one together. Kev tells Lip to “grow some” and be a man by staying in school and not quitting just because of the midterm incident. Kev tells it like it is and takes no mercy on Lip when giving him advice. Lip heads back to school begging for mercy from his professor. He takes pity on him and allows him to test again.

Complaining that his wife is not getting paid what she is worth as a prostitute for Sasha, Mickey storms through the door and calls out all the girls trying to get them on board to complain about not getting paid for the dirty work they do. The girls follow him to the bar as he makes plans to fight to help them. Sasha ends up calling to request a meeting. Mickey tries cutting a deal with Sasha that benefits the girls and himself, when she walks off telling him to go “F*%$ himself.” The girls begin to revolt and hold a meeting to try to figure out their next move after Mickey screwed up everything for them.

Debbie tells Holly that her 20-year old boyfriend said it wasn’t the right time when she attempted to have sex with him. Holly, very surprised, says she cannot even imagine what that could mean since it has never happened to her. She gets advice from Mandy encouraging her to send a dirty selfie to her boyfriend. She tells Debbie that he is just scared of getting in trouble, and that is why he rebuffed her advances. Debbie attempts to take a selfie of her topless, when she decides a magazine pic would be much better. Later, upon seeing her boyfriend she tries to jump on him to get things going, but he explains that she is too young and not ready for sex. Ready to prove she is more grown up than anyone thinks, she offers to meet a boy in the bathroom…some random boy who she knows nothing about other than he wants a quickie. Once in the bathroom, Debbie backs out.

Kev finds a way to have cheap labor, at the expense of men here illegally, by having them work all day paying them mere dollars as they leave.

Later, Sammi comes to the bar to see Frank. She shares the pain she felt over the years wondering about her long-lost father. Frank buys her a beer and the episode ends with the two going down memory lane looking through old pictures and Frank getting excited while sitting close to her.