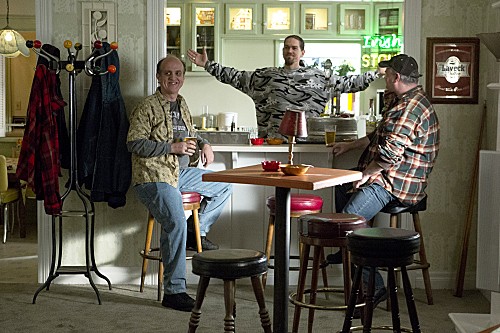 Tonight on Showtime the uniquely twisted and highly entertaining show SHAMELESS returns with another winner of an episode for fans to enjoy. In “The Legend of Bonnie and Carl” Carl has a connection with a troubled girl. Fiona struggles to find a job. Did you watch last week’s episode? If not then you’re in luck because we recapped the whole thing for you and you can get caught up right here.

On that episode Ian got kicked out of Mickey’s house by a hammer-wielding Svetlana and made a long-awaited return to the Gallagher house. Also, to prepare for a visit from her probation officer, Fiona had to remove all paraphernalia from the house.

On tonight’s episode Carl connects with a girl in detention; Lip and Amanda grow closer; Sheila returns with big plans; Fiona searches for a job; Mickey spends time with Ian.

“The Legend of Bonnie and Carl” is going to be great, and you won’t want to miss it. So be sure to tune in for our live coverage of Shameless — tonight at 9 PM EST! While you wait for our recap, hit up the comments and let us know your thoughts on the current season of SHAMELESS!

Tonight’s episode opens with Fiona getting herself showered and ready for the big day..she gets her monitoring bracelet off. Lip shares with her that he will keep sneaking food from the cafeteria, he cancelled cable and is using the money set aside for his tuition towards paying for heating the house. Fiona assures him that she can get a job now so she can contribute to the house bills so he can pay for tuition. Mickey is still at the house, and is apparently living there now. Lip questions Ian about it, but doesn’t get much of a response. Sammi has to give the doctor who comes to visit Frank payment in a not-so-conventional way. Despite her crying, he tells her to continue since it won’t ruin it for him.

Ron’s ex Amanda is still forcing herself on Lip. She ends up taking her top off to try to get her way with him. Ron walks in on them and the scene is very uncomfortable. Lip runs out after Ron and he assures him he is over her and he can have her. Good riddance. Later, Amanda and Lip are talking and Lip tells her that he does not want to get involved. She assures him she doesn’t want that either, but for all the babysitting, she does want something…she wants him to pretend to be her boyfriend for her parents (who she hates) when they come for parents weekend.

Fiona gets all of the details of her probation. She seems to have everything right on track and happily shares her progress and plans with the parole officer. Meanwhile, Sammi is lighting incense for Frank and is asking him where his desired resting place is. Frank gets annoyed and continues to assure her that he is not dying.

Carl is in detention and meets a girl who is just his type. She advises him on the proper way to make a shank, and how to ensure infection. The girl, Bonnie, out some acid tablets in the teacher’s drink so she and Carl can leave and have some fun.

Debbie is walking and talking with Matty and gets the details on the new girl he is dating and pretends not to care.

Svetlona comes to see Mickey to show him the baby and to ask for money. She gets real graphic and tells him that if he doesn’t have $500.00 by the next day, she will tell his father about his relationship with Ian. Mickey starts feverishly looking for money to pay her off. The money owed to him from Kev is not nearly as much as he thought it would be. Ian, meanwhile, brings some clothes for the baby because he is concerned.

At Fiona’s interview, she does really well until she is asked to complete her incomplete application as she must check the box as to whether or not she has been convicted of a felony. Once the interviewer sees that she has been, Fiona tries to explain but the woman blows her off and gives her the “we’;; be in touch” line. Fiona is learning how hard it will be to find a job with a felony conviction. Fiona attempts to make it home in time from her interview, but the train is not working and there is no estimate when it will be running, she misses the bus, and ends up having to get as far as she can by cab for $12.00. She has to be home in time for her probation check. Fiona makes it home just in time, by running half the way, to be there by her 6PM deadline.

Mandy is at the house making dinner. Mandy gets Debbie in the mood for revenge on the new girl in Matty’s life. Later Debbie is seen stalking Matty’s latest love at her job. She calls her with a threat and hangs up. Later she follows her as she walks to nursing school and overhears her talking to Matty.

Later, as Ian goes to work at the club, Mickey is right behind him and asks if he has any money. A rich guy pulls up asking for sex, and Mickey goes off assuring him he is not a prostate. Shortly after, Mickey’s wheels begin turning and he tells Ian to call in sick…he has a plan. After, Ian is seen propositioning a man at a hotel bar. Unable to let his man sell himself for sex, he hides in the closet while Ian starts undressing. The man is ready to go in when Mickey jumps out of the closet, takes a picture, and then blackmails the man by threatening to send the picture to his wife and daughter (who he sees on his phone). They take a watch and plan to make him go to the ATM to give them some money. The scene ends with Mickey kicking him right where it hurts.

Sheila comes home to an empty house and questions where her furniture is. Frank is up in bed, but Sammi is gone. Sheila tries to wake Frank. While he sleeps, Sheila starts talking about her breakup with Roger. She finds out he was more Mexican than Indian. Sheila tells him how she wants to adopt the little kids they were caring for but she needs a marriage license. She asks Frank to marry her. He still sleeps. Sammi comes home shortly after and Sheila tells her about her plans for a wedding. She tells her that Frank accepted and that she is already making plans. She tells Sammi she’ll be her new mom. Just then Sammi’s son shares that he thinks grandpa is not breathing. They run up to check on him and find that he still has a faint heartbeat.

Fiona tries to get an old babysitting job back, but the mom knows about the drug issue and has to decline.

Lip returns to his dorm to see Amanda has planned out his entire schedule in five minute increments and has it posted on the wall. When he gripes, she hands him a new phone she bought him that she synced his schedule to. He accepts it.

Carl begins to act out so he can get more detention to meet up with the new girl he likes. Svetlana tells Mickey to come home “or else.” Mandy’s boyfriend is searching for Lip because he knows Mandy still has a thing for him.

Fiona is in one of her meetings, but instead of listening, she is playing with her phone. Fiona tries to justify her actions by telling the group leader she is just trying to look for another job. The woman gives her a number for a tip on a job. Too bad Fiona finds out it is for hooking.

Debbie steals a snake form a pet store and puts it in Matty’s girlfriend’s car with a note to stay away from him. Frank refuses treatment when paramedics arrive and Sammi goes crazy, screaming at him. Meanwhile, Lip is being chased down by Mandy’s man at college. Security comes to break up the one-way fight and Lip lies that he was trying to sell him crack. They end up tasing Mandy’s man.

Bonnie is encouraging Carl to do an armed robbery with a fake gun. Turns out she holds the gun, demands the money from a liquor store and when the man refuses she shoots the gun at a tv. Carl and her kiss and plan to hit a bank the next day.

Fiona goes back to her old job and asks her friend to change her record so that it doesn’t show she was fired, but that they had let her go through a lay off. Mike and Robbie’s sister comes over and goes completely psychotic on her telling her that she is not a good person and she needs to destroy her family and leave her family alone because of all the damage she has already done. She walks off in shame.

Mickey goes back home to pick up more of his things and walks in on Mandy taking care of her bloodied face. Matty’s girl chases down Debbie with a baseball bat and warns her that SHE doesn’t know who SHE is messing with (same thing Debbie tried to tell her). Kev and some buddies set up a mock bar in Sheila’s house since that is where he told Sammi he felt most comfortable. Since he cannot leave, they brought the bar to him.

Fiona goes to Robbie’s and yells at him that she should have told the police it was his drugs. She cries that everything is messed up because of him. The scene ends with her crying, looking helpless and desperate.