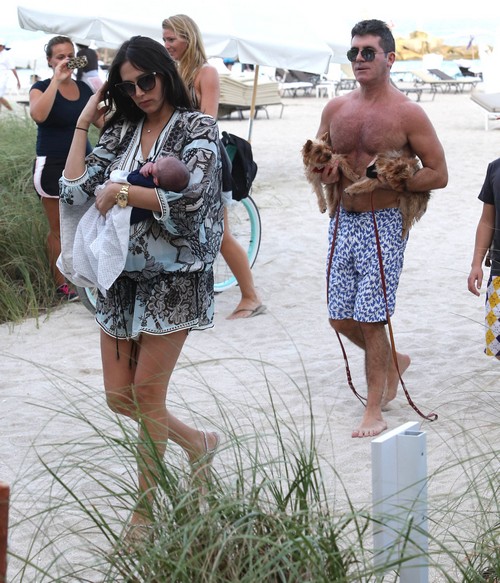 Simon Cowell and his baby mama/girlfriend/whatever-she-is Lauren Silverman recently gave birth to their first child together, Eric Cowell. But of course, instead of going away and raising their child in peace, away from the media glare and spotlight, Simon and Lauren have taken the first pap opportunity and famewhored their little family for the whole world to see.

The couple were spotted at the beach in Miami this past weekend, and it’s obvious that the paps were called. First of all, the paps managed to get clear shots of everyone involved, including the new baby. And second, there’s several pictures where both Lauren and Simon are staring directly at the camera, and in some of them, it looks like they’re posing.

I mean, neither Lauren nor the baby look like they should be out at the beach so soon after giving birth. A newborn baby’s skin is very sensitive, and while I’m sure they put plenty of sunblock on him, they really should be at home resting – not at the beach, sunbathing and posing for paparazzi photos.

On the one hand, maybe they didn’t want to resort to selling their baby’s picture to the tabloids, figuring that the pap photos would dilute the price of Eric’s pictures. On the other hand, they could have easily kept Eric hidden from the media and paps if they really wanted to, but I don’t think they did. This is the first time Simon’s been relevant in years, so why wouldn’t he take advantage of it?

What do you guys think? Did Simon and Lauren know the paparazzi were taking pictures, and were they responsible for the paps being there in the first place? Let us know your thoughts in the comments below.