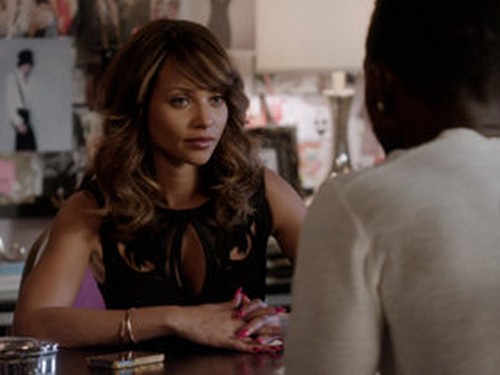 Tonight on VH1 their reality show SINGLE LADIES airs with a new episode called, “The Girl Most Likely To…”  On tonight’s episode Raquel mulls a partnership with Terrence in his new business venture. Meanwhile, April battles David over a new client, and Keisha considers disclosing a secret to Malcolm.

If you have never watched the show before on this season of Single Ladies we find our three fabulous friends tighter than ever and ready for more crazy and wild adventures. The premiere jumps three months ahead with a lavish wedding, leading to a new romance and new personal challenges for Raquel (Denise Vasi), April (Charity Shea), Keisha (LisaRaye McCoy) and Omar (Travis Winfrey). Raquel turns her focus to her boutique, Indulgence, and soon finds passion in an unexpected partnership.

On tonight’s episode as Raquel continues to look for investors for Indulgence, she considers a partnership with Terrence in his new business venture. April has her first head-to-head competition with David over a potential new client, Keke. Keisha considers telling Malcolm about the secret photo of Naomi and Malcolm Sr. she discovered. A run-in with Presley threatens Omar’s new relationship.

Raquel has to find a way to save Indulgence, her boutique shop, afloat. She’s increased profits in it and really feels as if she might be able to expand one day. All she needs to have her dream come true though is for someone to become an investor. Which is actually much harder than it sounds. She was out on business dinner and that went bust when she ran into Terrence in the parking lot. It seems her battery in car remote wasn’t working and luckily for her Terrence knew just want to do. He ended up stealing the battery out of someone else’s car keys to replace hers. He took it from the jerk that wouldn’t invest in her company.

Hopefully she’ll return the favor by telling anyone what Terrence was doing at the restaurant. Terrence was meeting up with his own potential investor. He wanted to implement faux diamonds into the family’s jewelry business. Malcolm gave him a definitive “no”. And so Terrence is looking to branch out on his own. Having capital however is a necessity.

April is dealing with her own problems on the job. Her boss wants her to sign on Keke as a new client for their management firm. The only problem is Keke is notoriously hard to reach mainly because her dad is known for being a hard ass. That and the fact she has to compete with David to see who signs Keke on first.

She had no choice really. She had to play dirty. She saw how David had sent over golf clubs to Keke’s dad and approached the man as if she was the one behind it. The dad soon caught on to her lie but by the point she at least interested him. He agreed to dinner in order to hear her pitch and so far she’s winning the contest.

Keisha is having moral dilemma. She found proof of Naomi Cox and Malcolm’s marriage. She went to Omar and Raquel for advice on the matter and they both told her different opinions. Raquel said she needed to tell Malcolm immediately while Omar advised her to find out the truth for herself first. Keisha oddly enough chooses to go with Omar’s suggestions. She followed Naomi to a spa retreat pretending to play nice. It sort of worked. Naomi wasn’t fooled into thinking Keisha wanted to be friend but it got her to open up about her mysterious wedding.

Another one of her investors meeting fell apart. This time it wasn’t because of her pitch though. Raquel was introducing her portfolio when the group that agreed to the meeting suddenly walked out. She learned the man in charge also happened to be a former classmate of hers. And this former geek wasn’t ever going to listen to one of the popular girls. So basically he wasted her time and energy for nothing.

She was venting with Omar when she noticed the bag Terrence had left on her car. It was the costume jewelry he made. Raquel likes it. There are very beautiful pieces even if they are fakes. Raquel set up a meeting with Terrence. She wants to see if they can do business.

Terrence came by and when she asked what inspired him (something Malcolm never did) he showed her his old neighborhood. That’s where he gets his inspiration. He wanted to create pieces for the people he used to call his family. Why shouldn’t their girlfriends, sisters, and/or wives not be able to afford something beautiful? Raquel understands where he’s coming from and that put her in the best position to offer him a partnership. She believes that together they can do great things and Terrence just happens to agree with her.

April got set up as well. David changed her restaurant at the last minute thereby making her miss her pitch with Keke’s dad. Yet like her friend she didn’t let that stop her. She cornered Keke during the singer yoga practice and made her an offer. She said she can help Keke go back to singing the songs she wants to sing rather than want her father tells her will be best. It’s time girls started to look out for each other instead of having men make all the decisions.

Keke loved the idea and agreed to sign with her. Now all April has to do is follow through on all her promises. She, Raquel, and Keisha were cooling off at Keisha’s place when they made too much noise. It disturbed Malcolm and he (un)kindly asked the ladies to leave. Keisha was upset he threw out her friends. She told him it was her place too seeing as he needed a reminder.

Keke’s show was a success and everyone did enjoy it. Omar included despite recently having to deal with the drama of running into his sister, Presley. It seems she finally picked between her boyfriend and her brother. She picked her now fiancée.

At the showing, Raquel told Keisha about joining up with Terrence. She didn’t want any hard feelings between them because they’re each backing a Franks brother. Keisha is fine with it. Anyways they have nigger fish to fry. When she did tell Malcolm about the picture of Naomi, he was scared. He knew it could ruin his case against the gold digger.

He knows if he hands it over then everything is done. That’s why he hasn’t handed it over. He chose to remove Naomi from the company over giving her essentially half of it.