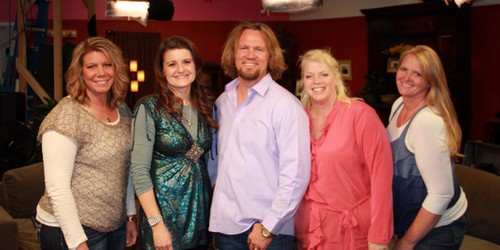 TLC’s reality show SISTER WIVES returns tonight with its seventh episode of season five. Tonight’s episode is called, “From Monogamy to Polygamy” and on tonight’s show a Christian couple in Missouri tell the Browns about their decision to become polygamists and how it has affected their lives.

On the last episode, the Browns took a road trip for Spring Break on Route 66 to Missouri to visit a non-Mormon polygamist clan, but cramped quarters in two RVs create tension among the traveling companions. Did you watch the last episode? If you missed it we have a full and detailed recap, right here for you.

On tonight’s episode the Browns reach the last stop on their road trip, as they meet the Richards, a Christian polygamist family. Religion isn’t the only difference between them, however. The Richards operate on rigidity and discipline, which shocks the fun loving Browns.

We will be covering Sister Wives tonight at 9:30 PM EST so don’t forget to come back to this site for our full and detailed recap. Make sure to refresh often to get the most recent details. While you wait for the recap, let us know how excited you are about the new season of Sister Wives.

The Brown family finally got to meet the Richard family. It took several days and far too many hours on the road but they got there.

The Richards family is very different from their own family. Not only are the Richards family a biblical polygamous family so they didn’t grow up or around fundamentalist but they’ve also raised their family in Missouri. Missouri is kind of hot button for polygamous. It happens to be a place that has run out a lot of polygamous families in the past so Kody, being inquisitive of course, had to ask how they’ve been able to maintain their lives. And the answer was secrecy.

The Richards weren’t out in public with their lifestyles. They were hiding it though they’ve apparently changed their minds about doing so upon meeting the Brown family. Because the problem with meeting the Browns is the fact they come with their very own camera team!

The patriarch of the Richard family has two wives. He’s been married to his first wife for the last thirteen years and married to the second wife for the last five. They have a numerous amount of kids and their children are mostly redheads which the Browns appreciate because they know how much their daughter Aspyn is kicking herself for missing the trip.

But overall the family is lovely. Certainly they have their quirks like making sure to eat at the same time. Though they also take that a step further by looking into each other’s eyes while they eat.

Besides that, they remind the Browns on how they were in their early days. Especially with the secrecy. Christine was speaking to one of the children and she saw a lot of herself in the little girl. Here was a kid who grew up seeing her family as normal and yet was bullied for being different. She had to hide who was her siblings and she was forced to ignore people who would say bad things about polygamy in general. So it was like a flashback for Christine.

Their family was forced to live in secrecy back when they were in Wyoming and even growing up as a fundamentalist polygamist – Christine knows what that fear is like. That’s why she’s thankfully everyday that her kids don’t have to live that way anymore.

When they were getting to know the Richards, Kody wanted to know what made them tick. And it revealed some truths Kody had to face as well. Rachel the first wife hadn’t originally liked the idea of a second wife. It had made her feel lacking somehow. Something Meri could understand seeing as she was in that exact position nearly 20 years ago.

Meri didn’t like the idea of bringing in a second wife even though she had grown up in and introduced her new husband to a polygamist family. And another thing, Christina Richard has been unable so far to have kids. It just never happened for her and her husband while her sister wife had has trouble free pregnancies from the beginning. Rachel has 9 children and two of which were born after Christina joined the family. So for the longest time she refused to say when she was pregnant because she didn’t want to hurt her sister wife.

Janelle and Christine probably felt like that about Meri. So these issues can be pretty common among their families. The only difference is how they choose to handle it.

The Richards know other polygamist but they’ve never judged others on how they wish to conduct their families. So it was the Browns that were shocked when they heard some of these families have shared bedrooms. That’s a bit of a taboo in their community.

The Browns were so shocked though they quickly made sure to keep judgment out of their words because as polygamist they know better than anyone else that it’s better not to critique. Everyone has to find their own path.