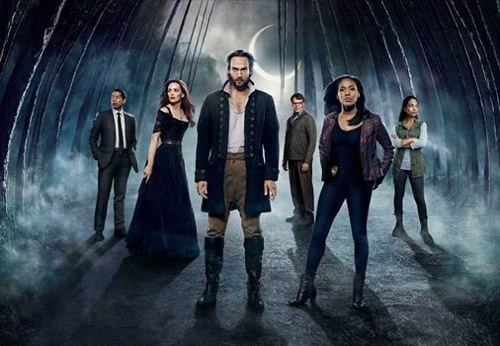 Tonight on FOX their mystery adventure drama SLEEPY HOLLOW continues with an all new Monday October 13, season 2 episode 4 called “Go Where I Send Thee.” On tonight’s episode, Abbie [Nicole Beharie]and Ichabod’s [Tom Mison] search for a missing child leads to the discovery of a demonic Pied Piper whose ties to the tot’s family go back centuries.

On the last episode, after a bank robbery turned violent, Abbie and Ichabod embarked on a hunt for a mysterious silver coin that had more power than meets the eye. Meanwhile, Captain Frank Irving was put in a position where he had to choose between his family and the greater good and the Mills’ sisterly bond was put to the utmost test. Did you watch the last episode? If you missed it, we have a full and detailed recap right here for you.

On tonight’s episode Abbie and Crane’s search for a missing Sleepy Hollow child reveals a creature akin to the Pied Piper, whose legacy with the child’s family extends back to a centuries-old curse.

Tonight’s Sleepy Hollow Season 2 Episode 4 is going to be exciting, and you won’t want to miss. So be sure to tune in for our live coverage of Sleepy Hollow — tonight at 9PM EST!

Tonight’s episode of Sleepy Hollow begins with Abby giving Ichabod driving lessons, Abby reassures him that he has a photographic memory and he has been watching her drive on a daily basis, so it should be easy for him. He begins speeding through the parking lot and burning rubber. Abby yells for him to stop and they climb out of the car. Ichabod tells Abby that he doesn’t need to learn how to drive because nothing is going to happen to her and they are going to survive the horsemen.

Ichabod’s phone goes off, and he sees that he has received an Amber Alert for a missing child. Abby looks at the phone and recognizes the family, she and Crane rush to the house. Abby sits down with ten year old Sarah’s parents, her mom confesses that last night she fell asleep in her office and forgot to set her alarm and when she woke up Sarah was gone. Sarah’s mom was Abby’s case worker when she and Jenny were taken away from her mother, Abby promises her they will find Sarah.

Abby and Ichabod head to the woods to see if they can pick up Sarah’s trail. They find blood splatter on the leaves and trees, and a hollow bone lying on the ground. Ichabod explains that it is the oldest instrument known to man, a Chinese flute. He plays a few notes on the flute, and Abby goes in to a trance and starts wandering away. Crane grabs her and snaps her out of it, and announces that Sarah wasn’t taken. She was lured in to the woods by an old legend, the pied piper.

Ichabod reveals that according to legend the pied piper lures its victims in to its secret lair with its flute, so they need to find the lair. He records the flute music on his phone and they head back to the woods. Abby puts the headphones on and listens to the recording so that she will be lured to the pied piper’s lair. Ichabod plans to follow her. As soon as Abby puts the headphones on she begins wandering through the woods. When Ichabod sees movement ahead he takes the headphones of from Abby and she snaps out of her trance. They sneak up on a man hiding behind a rock, and are shocked to see Holley covered in blood. He says that he saw Sarah and there is still time to save her.

Holley reveals that he was out in the woods looking for the pied piper’s flute. He knew it was Sarah’s tenth birthday and there is a curse on the Lancaster Family, so the pied piper would try to lure Sarah to his lair. Apparently every generation of the Lancaster Family loses a ten year old girl. Holley doesn’t believe in the legend though, he thinks that the there is a “sicko” running around in the woods wearing a costume and acting out the legend. Abby makes a deal with Holley and tells him that if he helps them find Sarah and bring her back home safely – he can have the flute for his collection.

Abby puts the headphones back on, and begins wandering through the woods again with Holley and Ichabod following. They arrive at a clearing in the woods, and they find a trap door covered in leaves. Abby draws her gun and they head down the stairs underground. After walking through a series of tunnels, Abby finds Sarah lying on the ground unconscious, but still alive. Abby gets to work picking the lock on her handcuffs.

Holley comes face to face with the pied piper and tries to shoot him, but he darts around the cave trying to attack him. He is able to hold the piper off while Abby frees Sarah and they all manage to make it out alive. Once they are back in the woods Holey demands the flute like he was promised. Ichabod rants that Holley is selfish and self-serving. Abby takes out the flute and snaps it in half and jokes that there was no way she was ever going to hand over a weapon that powerful to Holley.

Ichabod and Abby return Sarah to her grateful parents. Abby reveals that “someone” took her, and tells that Lancasters that police are coming to set up a perimeter and they should stay inside until this is over. Abby and Ichabod head back home and get their gear so that they can go back to the woods and finish off the pied piper. Ichabod is concerned though, something is bothering him, he doesn’t understand why Sarah’s mom didn’t seem more relieved that they had saved her.

Ichabod looks up the Lancaster family in the computer database, the legend was true and every generation dating back to the 1800’s had lost a ten year old girl. Expect there was once case in the 1930’s where the girl was saved and brought home. But, she came down with a fever right after she was returned home that killed her, and all of her brothers and sisters. So, Sarah could give her brothers the fever just like what happened in the 1930’s.

Abby and Ichabod rush back to the Lancaster’s house and when they arrive Sarah’s dad is loading her three brothers in to an ambulance because they had come down with the fever. Ichabod and Abby race to the woods to find Sarah and her mom Beth. They have to stop Beth before she gives Sarah back to the pied piper to save her other children. They locate Beth and Abby tries to talk some sense in to her. Beth cries that he has to take one child or else the curse will take them all.

While Abby is reasoning with Beth, the pie piper attacks and Crane fights him off with his sword. Abby screams at Ichabod to “finish him off,” so he chases him underground to his cave. The piper knocks out Ichabod, and Abby arrives at the last moment and saves the day and kills the demon.

Meanwhile at the psych ward Henry is visiting the captain, Henry tells him that if he fires him then he will cut off the funding to his family that he has been providing and will delay his court date indefinitely. Captain demands to know what Henry wants form him, Henry points out that Abby and Ichabod have done nothing but bring misery and suffering to his life. Captain realizes that he signed his contract with his blood and Henry has taken his soul.