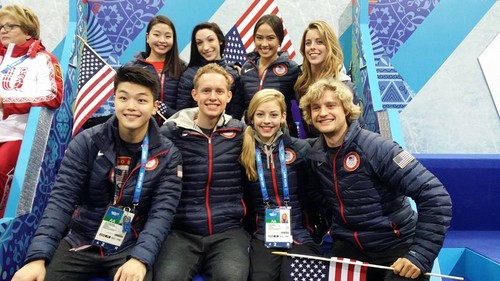 Why exactly did the IOC decide that we really need a new team competition for figure skating in the 2014 Winter Olympic Games? I’m not really sure either. I mean, sure I get the concept and all- it works for gymnastics in the summer games but here I fear it’ll be redundant. Each team contains one male, one female, one pair team and a dance couple and they all skate exactly the same two numbers that we’ll see later on in the regular figure skating competition. 10 countries are competing against each other and whomever has the highest number of combined points wins. Sounds simple enough but they still haven’t figured out what to do with a three-way tie for 5th place, which is what currently exists.

On Thursday the men and the pairs were the first to christen Sochi’s new Iceberg Skating Palace in the team competition and as usual there were a few surprises. On the mens side, seeing Russia’s Evgeny Plushenko back on Olympic ice was a bit startling, mainly because up until 2 weeks ago he wasn’t competing anywhere. Don’t get me wrong, his handful of medals from the last three Olympics certainly stand on their own and even if he’s not your favorite skater you do kind of have to stop and watch. The audience as Plushy took the ice first (making him the first athlete to compete on this Olympic ice- not a coincidence) went nuts and of course he delivered. No one was more shocked than Plushy himself to be sitting in second place after all was said and done.

Japan’s Yuzuru Hanyu pulled out all of the stops in his electric guitar blues and made his jumps look effortless. The end result was a first place in the standings. Canada’s Patrick Chan, also a three-time World Champion finds himself in third place here.

Although the U.S. entered the inaugural team event at the 2014 Winter Games in Sochi favored to wind up on the podium, an error-pocked short program by reigning national champion Jeremy Abbott left us sitting in 7th place when all was said and done. He looked like a jangled wreck before officially taking the ice and by the time he hit his quad toe he was flat out and crashing into the boards. He also took a disasterous point hit by singling what was intended to be a triple axel. After the fact Jeremy said he wasn’t in the least bit nervous to be there and that he was kind of glad to have crashed and burned! Understand that? Me neither. This, is precisely what Abbott has been known to do- blow it on the international stage when it matters most. It’s also why I’m putting more faith in Jason Brown to be on the podium for the U.S. men at these games.

Believe it or not, our U.S. pair team Marissa Castelli and Simon Shnapir actually turned in a strong performance making only a mistake on their side-by-side jumps. They landed in 5th place for the pairs division and helped pull the U.S. up to 5th place so far in the standings. Reigning world champions Tatiana Volosozhar and Maxim Trankov of course completely blew away the pairs division and their score combined with Plushenko’s puts the Russian team solidly in first place. Since skating often makes no sense Tania and Max told reporters that they fully intend to scrap their long program and replace it with something else before the next phase of competition. That’s it if it’s working and you’re winning- change gears and put yourself on shaky ground!

I’m always a huge fan of Canadian pairs and Meagan Duhamel and Eric Radford may even be better than many of the teams that have preceded them. They skated a flawless routine that was dedicated to their deceased coach and even their side-by-side triples that should have fallen apart were saved at the last second. Their score combined with what Patrick Chan posted has Canada sitting in second place.

Vanessa James and Morgan Cipres of France had one of those freak moments that you rarely see in pairs competition. He launched her for a throw triple twist that looked way off in the air. Instead of catching Vanessa she hit the ice and he kind of prevented her from falling. She looked a wreck and needless to say when the next element up was a side-by-side triple jump Vanessa blew it. It was kind of amazing to watch her be brave enough to land a throw jump and everything that came after it. The crash early on clearly effected them badly.

So the U.S. is currently sitting in the middle of the pack but we certainly are in a huge position to pull up. The ladies and dance teams still have to compete and Meryl Davis and Charlie White will likely finish in the top spot. Also the Chinese and German teams above us will certainly drop when the next two disciplines skate. I think the U.S. will find themselves battling Canada for a silver medal when all is said and done here.