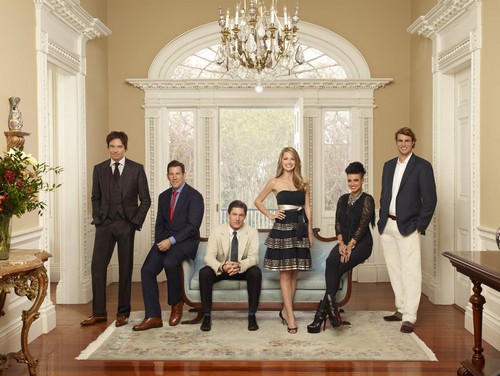 Tonight on Bravo their new series SOUTHERN CHARM premieres and the episode is called, “Peter Pan Sin-drome.”  The new series goes behind the walls of Charleston, South Carolina’s most aristocratic families to reveal a world of exclusivity, money and scandal that goes back generations.

The fast-paced, drama-filled docu-series follows six Charleston singles, Craig Conover, Cameran Eubanks, Jenna King, Thomas Ravenel, Shepard “Shep” Rose, andWhitney Sudler-Smith, struggling with the constraints of this tight-knit, posh society. The cast, some descendants of Vice Presidents and four-term Senators, and others from “new money,” is comprised of Southern bachelors who suffer from “Peter Pan Syndrome” by refusing to settle down; and the women in their lives who challenge them to grow up.

We will see them launch political careers, build businesses, break hearts, and chase true love — all while struggling to preserve their family names. Because in Charleston, you’re only as good as your last garden party and one social screw-up can taint generations to come.

On tonight’s episode We meet our 6th generation (at least) Southern Charmers in all of their glory as they hit on women, roll their eyes at the guys who hit on women, drink profusely, and generally exercise bad judgment.

Tonight’s episode is going to be filled with lots of drama and you won’t want to miss it, so be sure to tune in for our live coverage of the show tonight at 10bPM EST! While you wait for our recap hit the comments and let us know how excited you are about the premiere season of  “Southern Charm”

Tonight is the season premiere of reality show Southern Charm on Bravo. On tonight’s season premiere we meet the cast of Southern Charm. Thomas Ravanel was the state treasurer of South Carolina, until he indicted in 2007 for conspiracy to distribute drugs. He had to resign from office and he served six months in prison. He’s not done yet though, he is planning a political future.

Shepard Rose hails from Hilton Head, and his family founded South Carolina. The state dog of South Carolina is actually named after his family. Shep’s family is “basically Southern royalty.” He has no intention of settling down any time soon.

Cameran is not your typical Southern Belle, she considers herself a modern Southern woman. She is in the process of starting her career as a real estate agent. She is having a problem getting started working though, because there isn’t much real estate up for sale in Charleston. According to Shep Cameron is “one of the guys.”

Whitney Smith’s family line traces back to the 1600’s, and according to him his “family founded America.” Whitney is an artist, a director, a musician, and plans to open his own restaurant in Charleston, he also lives with his Mom. His Mom is less than thrilled by Whitney’s “trail of women running in and out of the house.”

Thomas meets up with his political consultant William Folks. Thomas is serious about getting back into politics, but as a convicted felon he can only run in three offices, house of senate, house of reps, or president. William tells his he just needs to “get clean and “settle down” and they can get the show on the road.

Craig is currently in law school, he moved to Charleston to go to college, and he fell in love with the town. Craig also has a full-time job and it gets in the way of his partying schedule. His supervisor is really riding him hard to keep “regular hours.”

Whitney is throwing a party, and has invited over all of his rich Charleston friends. Shep insists on going on a “beer run,” but Whitney is offended. Shep is luckily enough to run into his ex-girlfriend at the party, and she informs him he is going to be a “bachelor forever.”

Thomas Ravanel arrives at Whitney’s party. He tries some of Whitney’s “Death Punch.” Craig finally arrives late, and explains that he was in court.

Thomas is on a mission, his political advisor told him to find a wife. He is in luck, there is a girl at Whitney’s party named Kathryn, and she is referred to as a “Senate Barbie” and comes from a long line of founding families and politicians. He manages to convince her to come home with him.

Jenna King has lived all over the country, but she recently has moved to Charleston. She met Whitney in Los Angeles years ago and they have been friends ever since. The day after his party, Whitney and Jenna head to a boutique together to go shopping. Whitney thinks that Jenna is like him because she “does her own thing and doesn’t give a shit.”

Thomas heads to his friend JD’s restaurant and sits down with him to get some advice. JD is married and has a wife and kids, so Thomas thinks he would be a perfect person to discuss his relationship with Kathryn. JD thinks that Thomas needs to be careful choosing a wife, and he should “check out all his options.”

Jenna and Whitney head out to dinner with Cameran and her friend. Jenna and Cameran knew each other “way back when in high-school.” Cameran reveals that she passed her state real estate exam, and now she needs to find a house to sell. Cameran isn’t independently wealthy, and she doesn’t have a trust fund, she has to work hard to support herself. Whitney tells Cameran he needs her to sell him a “stabbing cabin.”

The next day Cameran and her friends are getting ready for the polo game at Thomas’s plantation. She tells her friends that Thomas is going to be there, and she confesses that she think Thomas has gotten a bad rap because of his last name, and his arrest is going to haunt him for years.

Shep, Whitney, Craig,and Cameran gather around to watch Thomas’s polo game. Whitney is fascinated by polo because they are privately owned teams, and all of the owners play on their teams. Jenna arrives at the polo game and Whitney introduces her to all of his guy friends.

After the polo game Thomas’s friends head into his house to eat dinner. Thomas has hired a catering company to prepare their dinner, so that he can relax with his friends and eat. Thomas rings the dinner bell, and then they gather around the table and toast to polo. Thomas and his friends discuss whether he needs a Melanie Wife or a Scarlett Wife (Gone With The Wind reference). Meanwhile Shep is trying hard to seal the deal with Jenna, but she’s not really interested.

After dinner Whitney takes Thomas aside, and lectures him about how he needs to behave if he is serious about getting back into politics. Whitney tells Thomas he needs to stop the cocaine jokes, and ditch his “playboy past.” Thomas’s feelings are hurt, and he didn’t realize his friend Whitney was so conservative.