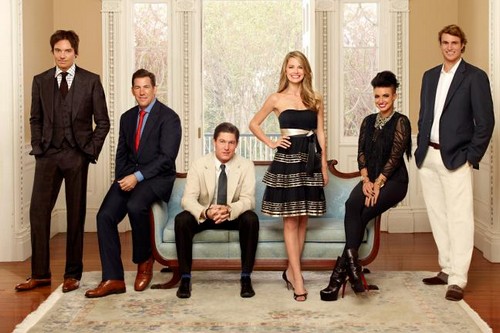 Tonight on Bravo their new series SOUTHERN CHARM continues with a new episode and it is called, “Reunion.”  On the episode, the Charleston cast members reunite with each other and peak about their lives and memorable moments.

On last week’s episode called, “One of the Lost Boys Leaves Neverland”  Whitney wanted to show everyone his new apartment. Shep thought it was a good idea to bring all his hook ups to Whitney’s event.

On tonight’s episode it’s the reunion episode and the Charleston cast members reunite. This episode will include the status of their lives; memorable moments from the inaugural season; and the relationship between Kathryn and Thomas. Andy Cohen hosts.

Tonight’s episode is going to be filled with lots of drama and you won’t want to miss it, so be sure to tune in for our live coverage of the show tonight at 10bPM EST! While you wait for our recap hit the comments and let us know how excited you are about the premiere season of “Southern Charm”

Andy Cohen is back moderating – this time he’s sitting down with the stars of Southern Charm and discussing the controversy.

An article from the New York Times recently came out to say that people from their own hometown hate the way they portrayed people from Charleston. But the cast says that’s just depends on who the reporters talked to. Everyone in their lives is actually pretty supportive of both them and the show.

Whitney’s own mother, who has always notoriously had something to say, never had a problem with the show. Then again she’s also a recognized star because of it.

Whitney’s mother has run into trouble for being outspoken. She along with the other cast-mates have all said at one point a few things about Thomas’s girlfriend. Catherine was a bit of a sore subject for everyone this past summer. Yet Thomas and his friends have moved pass that.

Whitney and Thomas probably had the biggest fall out over this girl, but they seem to be best friends again.

Andy pointed out that after being with the housewives so long it was kind of surprising to find the guys causing the most drama. And there was a lot of drama between the guys. Whether it was competing for the same girl or accidently sleeping with the same girl – the guys have had a lot of blowouts. Although with their case they tend to let bygones be bygones after grabbing a beer or something. While they say women tend to hold onto their grudges.

Another thing that took the audience by surprise just happened to be Cameran impromptu wedding. She kept her boyfriend under wraps throughout the whole season and people were shocked to hear she recently got married.

Cameran was used to that question by now. Although she explained that her husband knew what she was doing and supported her that still doesn’t give say why they kept their relationship out of the limelight. Maybe they found it to easier.

It was quit hard for everyone else that conducted a relationship in front of the cameras. Just look at Jenna. She was accused of using her boyfriend as a sugar daddy and that was completely unfair. Her boyfriend did get her a few things, but Jenna happens to make her own money. It’s not a lot yet it’s completely hers.

Though that’s how the women were seen this season on Southern Charm. If they didn’t come from old money than they were getting called a gold-digger.

Andy has a lot of questions from viewers and most of it appears to be about Catherine. Catherine is once again a hot topic and that mainly has to do with her pregnancy scare during the season, which if more people spoke the truth, could have happened to anyone.

Early on Catherine found herself two weeks late and when Thomas was telling his friends, namely Shep who also could have been the father; people began to worry about Thomas. Whitney certainly felt like Catherine tried to trap his friend and Shep was just worried about himself.

He says he reacted that way because of what he was on though everyone has figured out that he was truly scared over the possibility. But what shocks a person is that he continues to act recklessly. Did you know that Shep only assumes the woman is on the pill? Apparently, he doesn’t even bother to ask his partner if she is in fact taking birth control. He says it feels too good and that’s why he doesn’t ruin it with pesky questions.

And yet Thomas is the one with a baby. He and Catherine went on to have a daughter. Oh and if you’re wondering – he did get a DNA test on little Kensington. She is his and his family all love both mother and child.

As for Whitney, he was critical about Catherine’s age. She was after all 21 while Thomas was in his forties. Though Whitney soon lost his grounding when he went on to date a 21 year old.

The reason it’s different for him is the fact that Whitney claims his young girlfriend is on a whole different level than Catherine. He says she’s more accomplished and well-travelled while Catherine only pretends she is. Yet none of that matters now because Whitney is happy for Thomas and Catherine. He supports his friend and if Catherine is a part of the picture then Whitney is going to clap for her when she comes onstage.

Catherine has changed since having the baby. Cameran had originally thought Catherine was all show but after having Kensington – Catherine had matured.

Currently there aren’t any left-over harsh feelings from the group towards Catherine. Even from Craig and he was the one basically called her a slut at the dinner table. At the time; viewers often wondered if Craig had said that because he was the only one rejected by Catherine though he swears that wasn’t the case. Craig was honestly worried about Catherine’s motives and how maneuvered her way into his group of friends.

She did jump from one to the other. And Thomas has been already through a lot with his broken engagement. So Craig was merely protecting his friend.

Thomas had lost his last love and though his friends didn’t realize it until later that’s why he tried to fight for his relationship to Catherine. Regardless of everything that happened between her and his friends; they literally made up the day after he dumped her. So they were together by time they found out they were expecting.

So there wasn’t a trap and Thomas is the happiest he’s ever been. He’s with Catherine and he’s even thinking about running for Senator. Sure he has scandalous past, but like Whitney said at least he’s honest. Thomas will drink and he will party yet that doesn’t mean he won’t get the job done.

Will Thomas win the senate seat or has this show harmed any political aspirations he might have?