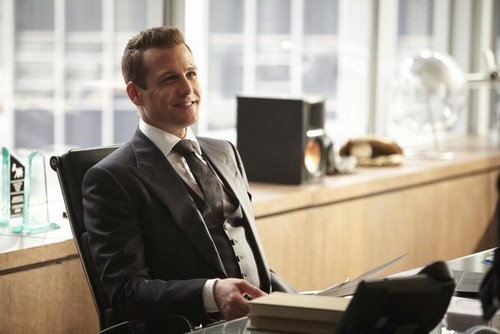 SUITS returns to the USA network tonight with an episode called “Moot Point” In it Harvey goes one-on-one against an old law school rival, with an assist from Mike, while he and Jessica try not to get caught in the crossfire of a battle that erupts between Louis and Scottie.

On the last episode Mike went to Louis and confessed to falsifying that one A+ rather than to fabricating his entire Harvard career. Louis invited that professor to give a lecture and said that he would expose Mike unless Mike confessed to and apologized to the professor. Harvey first failed to coerce the professor into cancelling the lecture, but then prevailed on Louis to let it go, citing his own friendship with Louis and Mike’s fitness for and love of the law.

Meanwhile, Jessica’s ex-husband Quentin had died, leaving Harvey and Jessica as co-executors. Quentin’s second wife Lisa wanted to sell his drug company, which Jessica opposed. Prompted by Harvey, she learned that Lisa’s main goal was to ensure that Quentin’s research led to the release of a drug to market. Did you happen to catch the last episode? If not then we have a full recap of it for you right here.

Tonight’s episode looks like it is going to be great and you won’t want to miss it, so be sure to tune in for our live coverage of USA Network’s “Suits” at 10:00 PM EST! While you wait for our recap hit the comments and let us know how excited you are for the season 3 episode 13 of Suits tonight.

Louis tells Jessica he feels “screwed over” by her partner’s girlfriend. She tells him he’d be much better off to work with her rather than against her. She tells him that working with Scottie could lead to better things for him as well. All of a sudden a lightbulb seems to go off and Louis takes off with “a new attitude.” He comes to Scottie’s office with a gift, telling her he wants to be friends. As soon as she tells him that she accepts his friendship, he asks for his case back. When she declines, he reminds her that they are friends now. She does not relent. He then reminds her of the policy that would require he accompany her on all proceedings with the case because she is new and he was the attorney originally assigned to the case. She warns him that he is messing with the wrong person.

Harvey is met in the hallway by an old Harvard acquaintance, Elliot Stemple. Both of their egos are in overdrive and they end up in the same courtroom as opposing counsel. Mike and Harvey go toe to toe with Elliott as he gives excuse after excuse for not serving them with the motion on the case. The boys call him on it and share with the judge that he has used the same excuse for years when he is not prepared. The judge ends up finding him and not granting him the request he had hoped for.

When Elliot comes to see Mike, he lies to him and tries to gain some sympathy. Mike calls him on his lie and tells him to get out of their office. Meanwhile, Scottie and Harvey meet over drinks and a fire and talk about the Louis issue. Harvey tries to reel her in a bit. Back at the office the next morning, Louis tells Harvey he has been up all night working before he hears that the email he received that he thought was from Harvey was actually from Dana, via Harvey’s computer. Shortly after, Louis inquires about something he asked his assistant to do, only to find that she received a note—which she thought was from him—telling her not to proceed with his initial request. Turns out, the silver-tongued, conniving lawyer strikes again and set up Louis. He is over-the-top upset now, as she walks away smirking.

Elliot is back at the office for a deposition. He ends up proposing a settlement agreement just moments before he goes off and begins talking about issues Harvey had with an old client where he ended up being sued. Despite Harvey telling him to stop, he keeps going. He gets up and makes a threat about having the ability to get his independent analyst to say anything he wants him to. Too bad the depo was being recorded and likely caught his threat as a lasting memory. When Mike takes the camera to Benjamin to see if he can enhance the sound, Benjamin tells him that the cameras are too cheap to pick up that detail. Harvey and Mike go to the judge and tell him about the comments Elliot made, making it sound as though they have the incriminating comments on tape. Elliot is forced to fork over the raw data from his analyst that Harvey and Mike ask the judge for since he believes they have him on tape and the judge has issued a pretty stern warning.

Louis and Scottie meet with the client on the case that Scottie took over. Louis reported the company to the FTC just to gain an upper hand on sharing information at the meeting that Scottie wouldn’t have known about. After throwing her under the bus, he pats her on the back telling the client that she is still new and to cut her some slack. She is furious and lets it out once out of the client’s sight. He basically tells her…too bad. He can play the game too.

Elliot is back in Harvey’s office asking to settle. Harvey tells him he will not settle. Elliot admits to have cheated in the past to beat out Harvey. Elliot starts getting upset when Harvey doesn’t fall for his sob story and the two begin to argue, ready for battle in the courtroom. No white flags being raised yet.

Donna tries to make peace between Scottie and Louis. Louis does not relent. In court, Harvey starts questioning the analyst. Elliot begins questioning the witness as well and after a question about design of the product the case is about, he declares he wants to file a countersuit. Outside of the courtroom Elliot tells Harvey he has been setting him up all along and that he now has the upper hand. Harvey asks Jessica for help on the case. Mike comes in on the meeting between Harvey and Jessica with his theory on the Elliot issue, which differs from what Harvey and Jessica had been thinking.

Louis and Scottie continue to battle and Scottie shares that she did some other devious plotting before this case even came up. She warns Louis that she’s beaten him before and she’ll do it again if she needs to. She tells him to back off.

Harvey tells Elliot that he needs to drop the suit, publicly admit to wrongdoing and pay a large sum that should have Elliot’s client very unhappy. He called Elliot and a devious scheme that Mike figured out after a little brainstorming. Jessica asks Mike to take his name off the case because this was such a big case and she received a call from a magazine for an interview. She doesn’t want him in the spotlight. Mike understands, but deep down he is really upset that this is his fate.

Louis comes to Harvey with one more request to get the case back. He is now asking for a favor in return for the favor he just gave when it came to Mike. Harvey tells him that he thought they were friends. It seems apparent after their conversation that they can no longer have a friendship. Meanwhile, at the apartment, Rachel shows Mike a fully decorated home upon his arrival. He is still preoccupied with the conversation of him having to keep a low profile.

Harvey arrives home as Scottie is waiting for him with a drink. Harvey explains that Louis knows that she set everything up and that it is best for her to give in and give the case back to her.She is upset and asks him if he is coming to her professionally or personally. He can’t give her a definitive answer, and she tells him he can’t have it both ways. The scene ends with him telling her he is coming to her as a partner, not as a boyfriend. Could this be the end of Scottie and Harvey?