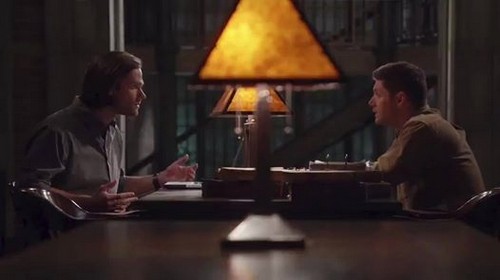 Supernatural continues tonight on the CW with an all new Tuesday December 2, season 10 episode 8 called “Hibbing 911” and we have your weekly recap below. On tonight’s episode, Jody Mills reluctantly attends a mandatory sheriff’s retreat and is partnered with an overeager sheriff who wants to bond. Even worse, a body with just strings of meat and skin hanging off the bones is discovered. Jody calls Sam [Jared Padalecki] and Dean [Jensen Ackles] for help.

On the last episode, Sam (Jared Padaleck) and Dean (Jensen Ackles) stumbled upon a demon who was running from Crowley (Mark A. Sheppard). Before they had a chance to shut him down, Rowena (guest star Ruth Connell) stepped in and took things into her own hands. Realizing Rowena was trying to recruit and train followers in the art of witchcraft, Sam and Dean came up with a plan to catch her before she can do much damage. Meanwhile, Hannah (guest star Erica Carroll) ran into a blast from her vessel’s past, which complicated things for her and Castiel (Misha Collins). Did you watch the last episode? If you missed it we have a full and detailed recap right here for you.

On tonight’s episode as per the CW synopsis, “Jody Mills (guest star Kim Rhodes) reluctantly attends a mandatory sheriff’s retreat and is partnered with an overeager sheriff named Donna (guest star Briana Buckmaster) who wants to bond. Just as Jody thinks things can’t get any worse, a body with just strings of meat and skin hanging off the bones is discovered. While the local sheriffs blame an animal attack, Jody knows better and calls Sam (Jared Padalecki) and Dean (Jensen Ackles). Tim Andrew directed this episode with teleplay by Jenny Klein and story by Jenny Klein & Phil Sgriccia.”

Tonight’s season 10 episode 8 looks like it is going to be great and you won’t want to miss it, so be sure to tune in for our live coverage of CW’s Supernatural at 9:00 PM EST!

We see a kid going to use spray paint on a wall, but he is grabbed by someone and beaten to death. Now we see Officer Jodie and she asks a girl how old she is, the girl says she is 19 and Jodie gives her some money to get some food to eat. Jodie walks in and doesn’t seem so happy, she is offered a lollipop from the woman named Donna and a cop comes in asking for extra meal vouchers; she hands them to him and the guy used to be Donna’s husband. We now see Sam and Dean studying up on the lore for Kane’s mark. Back at the Sheriff’s retreat with Jodie a guy it telling them all that it’s an honor having them all there; he gets a call and hangs up on it. He has decided to let these officers partner up and try to be a team for the weekend, Jodie is talking to Alex on the phone telling her all is fine and will go well.

Donna says hi to Jodie and offers to be her partner.  Donna goes over to a friend named Kevin and is told about a man who was eaten, no one knows what it could be and Jodie asks if these attacks are normal. Donna says it isn’t, Jodie leaves and calls Sam; she puts them on speaker. Dean says hi as well; though Jodie tells them that something was eaten right down to their bones. Dean says they could come down, though Jodie says she can handle it and will call if it becomes too much. Jodie goes to the police department and asks to see the body, she is told that she isn’t allowed too and Donna comes in asking to see the body; they go in and see the body is missing his whole stomach and arms. Donna tells Jodie to come over and says she has been hunting for a long time; she has no idea what the beast could have been. We now see a guy go out to take out the trash, though is about to take a smoke and hears a sound; he ignores it and goes back to trying to have a smoke. Though after throwing the trash out he hears a loud sound in the garbage can, he is puled inside of it and eaten.

Donna goes into a bar with Jodie and meet up with another officer name Len, she asks about the animal that could have did it and he really has no clue; another officer comes in telling Len they have an issue and he should come. Len leaves and Donna thinks maybe animal control should take the lead, Donna looks over and sees her ex-husband dancing with another girl, Jodie tells her that Doug is a dick and nothing she should care about. Donna goes to the bathroom and Jodie goes to talk to Len again, she tells them to tell her what is going on; Len says another person turned up dead. Donna comes back and sees Jodie is gone, Jodie calls Alex and finds out she is doing something behind her back. Donna comes to Jodie and Jodie confesses about the animal attack; Donna asks if she can help with anything. Jodie starts talking about Alex and how she can’t get through to her, the two laugh and drive off.

The next day Dean and Sam arrive at the sheriff retreat, they go to see Jodie and give her a hug; the second victim was losing his wallet. Jodie tells them their first victim lost his belt, Sam and Dean notice Donna; they ask Jodie to distract her from it all. Donna comes in and asks them if there is anything she can help the boys with, Jodie tells her they can go check out something and she is excited to go. Sam and Dean go over and talk to some officers about the attacks happening, the cops crack jokes about the FBI coming here and Dean gets really annoyed with them. The boys are sure the sheriff is lying and the deputy knows. Donna goes to check out some guns with Jodie, Doug comes in and starts making jokes against Donna and she tells him to save it for someone who cares. Jodie asks Doug what is wrong with him and calls him a douche, Doug decides he’s just going to go; Donna asks her why she did that and Jodie says he can’t treat her like that. Donna says not till she lost a husband she shouldn’t talk, Jodie mentions her husband is dead and Donna feels very bad; deciding to go get some air. Dean talks to the deputy asking for footage of the attack, the deputy says that the sheriff has been hiding it. Donna is outside and notices the sheriff with sharp teeth feasting on a woman, he hears a sound and then runs off.

Jodie asks Dean about him being gone a little while and offers to talk if he needs it, Sam comes over and hacked in the server to find the files deleted; Donna comes in and asks to talk to Jodie alone. Donna tells Jodie about the sheriff with sharp monster teeth feasting on her, Jodie tells her she believes her and the FBI guys will too. Jodie calls Sam and tells him where to find him, Jodie goes to the room number of the sheriff and breaks in. Donna finds tons of sun block and Jodie says she’ll explain it all later, Donna walks over to find a notepad that she starts to shade on; Jodie pulls out a machete and Donna her gun when it is just Sam and Dean walking in. Jodie basically tells Donna all about monsters, Donna gives them a location of where the vampire sheriff went. Sam and Dean let the girls come on the vampire hunt, but tell them to let them take the lead. Dean gives Donna a weapon to cut off the vampires head, making it clear the head has to roll. Sam looks in on the sheriff inside the barn, but he is all of a sudden gone; he tells them to run but they are attacked by other vampires.. The young girl who Jodie gave money to in the beginning is one of them.

The girl says all of them will become vampires, Dean tells her they are scum and that is the end of the story; she takes off Dean’s belt and throws it to another vampire. The vampire says they sip and go, the sheriff asks them to please go away now; he doesn’t kill people. Len mentions that he found the person dead, he never actually attacked anyone. The girl tells Len a vampire who doesn’t feed is a tiger eating a salad; Sam asks what Len is going to do. The girl mentions having been found by Len, he taught them everything; though one day Len was gone and his picture was in the paper. they can’t believe he became a cop, Len asks if they want to know why he left; Len mentions that he couldn’t deal with how people begged for their lives. Len says he wanted to protect people after years of gutting them, he wanted to change and not be what he used to be. The girl picks up a machete and cuts of Glen’s head, Dean frees himself and starts fighting the vampires off. He cuts one of their heads off and the girl goes after Jodie, but Donna cuts off her head.

Jodie asks Donna if she is okay, Donna says he is fine though feels sick after chopping off a vampires head; Dean says for the first time he didn’t feel the mark was pushing him at all. Donna says the world seems darker. Dean says he felt like himself for once, he feels better. Jodie asks Donna if she would like some pointers on how to kill these monster and Donna says she’d like that. Dean and Sam get into the car and start driving off.