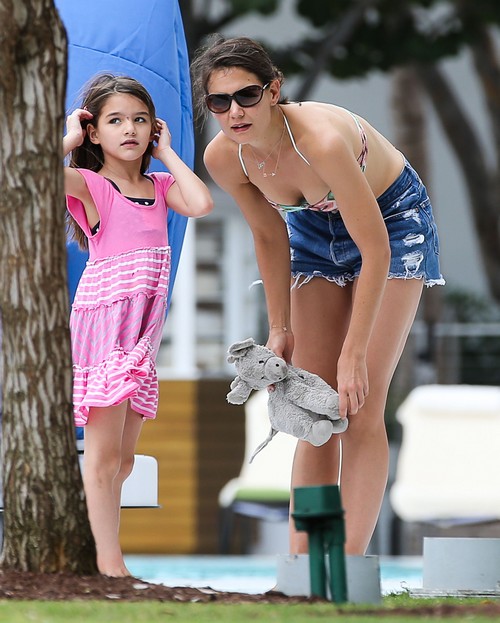 At 7 years old, Suri Cruise reportedly wants her ears pierced. Should she be allowed to get them pierced? Right now, Suri’s spending the holidays with her mother, Katie Holmes, and their extended family at Canyon Ranch Miami Beach in Florida. According to a Page Six source, “With a bodyguard and nanny, there were at least 17 of them.” Why does a 7 year-old need her own servant?

This source also adds that they overheard Suri asking her mother if she could get her ears pierced for real, since she’s been wearing clip-on earrings for the past few years.

In some cultures, it’s the norm to get a child’s ear pierced at the earliest possible opportunity. In other, it’s considered a big no-no until the child becomes a teenager. So in this particular scenario, what will Katie say? Let’s face it, Tom Cruise is barely involved in this decision, even if he was there with them for the holidays.

I’m guessing Katie’s going to put her foot down. She definitely seems like she has strict ground rules for Suri’s behavior, and what she will or won’t allow. Then again, Suri could easily ask her father for it whenever they meet next, and Tom might feel so guilty that he says okay on the spot.

Do you guys think Suri should be allowed to get her ears pierced at 7? Do you think Katie would allow it, or will she tells Suri that she has to wait a few years? And if Katie does put her foot down, so you think Suri will then turn to her father for the same request? Let us know your thoughts in the comments below.