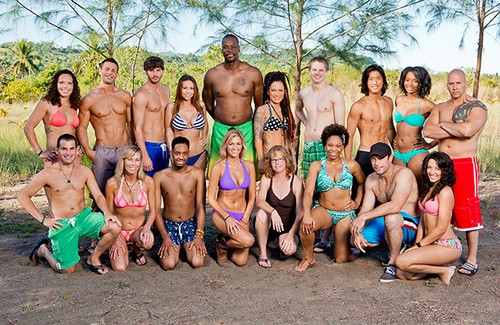 Tonight on CBS their Emmy Award-winning series SURVIVOR is airing an advance preview of their new season, “Survivor: Cagayan Brawn vs. Brains vs. Beauty” before it airs February 26th, 2013.

This season the popular realty show was filmed in Cagayan, a province in the Philippines.  The groupings of these tribes, “Brawn vs. Brains vs. Beauty” each comprises of six castaways, reflect the distinguishing qualities that people bring to the game and test whether there is any truth to the pre-conceived notion that that certain characteristics will help you win the game of SURVIVOR. All castaways will compete to outwit, outplay, outlast and ultimately be crowned Sole Survivor.

Tonight to get us psyched for the Survivor: Cagayan we are being treated to a sneak peek of the 28th season of “Survivor” which will feature interviews with the contestants and Jeff Probst.

Tonight’s episode looks like it is going to be great and you won’t want to miss it, so be sure to tune in for our live coverage of CBS’s Survivor: Cagayan Brawn vs. Brains vs. Beauty Preview! While you wait for our recap hit the comments and let us know how excited you are about the return of Survivor?  Will you be tuning in?

Survivor Cagayan will be divided into three tribes this year for the 28th season: beauty, braun, and brains (strength, intelligence, and appearance).  At the beginning of the show, each team will select a leader, and then each leader will have to select who they think is the weakest player on the team.  The weak players will be taken back to camp and have to make a decision, will they choose a bag of rice to give their team or get a clue for the Immunity.  This 21 year old Morgan from California will be a member of the Beauty Tribe.  Morgan was a NFL cheerleader before she even graduated from high-school.  She thinks that experience alone prepped her for survivor, she plans to flirt and have guys in her back-pockets.  However she has no intention of forming a relationship on Survivor.

37 year old Natasha is also an ex-NFL cheerleader, for the Rams, and will be on the Beauty Tribe.  She is a “person of Faith” but she also enjoys life.  She grew up on “corn bread and fried chicken” so she thinks she is sturdier than the other girls.

New Jersey local Tony will be on the Brawn team, and he is also a police officer.  He says he’s not the smartest player, but he is “savvy,” so other players won’t be able to “get one over on him.”  He refers to himself as “bad ass Tony.”

32 year old J’tia is a nuclear engineer for the government, so she will obviously be playing on the Brain tribe.  She plans to play “aloof,” she will reveal that she is an engineer to her teammates, but she has no intention of telling them about her PHD’s.  She wants to play Survivor like “Dick Cheney.”

Trist has been teaching Pilates for sixteen years, and will be a member of the Brawn Tribe.  She has always wanted to be on Survivor, and “played Survivor in her head” since 2000 when she began watching the show.

Jeremiah, is a country boy, and grew up on a farm.  He is also ridiculously good looking, so he will be playing on the Beauty Tribe.  He is excited to get to know all the beautiful girls on Survivor, and he is single and open to a showmance.

27 year old Garrett’s high IQ landed him on the Brains team.  He is a high-stakes poker player, but he won’t be sharing that with the other players, he plans to tell them that he is just an internet marketer.

Sarah is a police officer in the narcotics division, and will be a member of the Brawn Tribe.  She has fighting skills in MMA also, but she has no intention of telling her teammates that she is a cop.  Cops have never done well on Survivor.

On the 28th season of survivor we will some changed in the Tribal Council.  The production designer Jordan Ferrier has included amazing artwork and hand-carved statues that they “built to look old.”  They actually make a point of making the Tribal Council look overgrown and mossy, it takes about 7 weeks for them to build the Tribal Council set.

Cliff, a New Jersey native, is actually an ex-professional NBA player, he played for over five teams including Detroit and the Nets.  He knows that with his massive height, 6 feet ten inches, other players are going to look at him as a threat.

Kass will be playing on the Brains Tribe, seeing as how she is a professional lawyer.  She is forty, and a huge fan of Survivor, and she looks at this as her midlife crisis.

24 year old social worker Brice will be playing for the Beauty Tribe.  He plans to be the first “fashionable gay man” on Survivor.  The only other gay man he can remember on Survivor was Colton, and “they are not in the same boat.”  Brice thinks his teammates aren’t going to take him serious, but he will be an underlying threat.

21 year old Alexis will be a member of the Beauty Tribe, but she has brains too.  She is actually currently a Psych major, but she doesn’t want to tell her teammates, because they will be intimidated.  She plans to come across as harmless, and flirt her way through the game.

Californian Woo is proficient in Martial Arts, has a black belt, and is also a surf instructor.  He will obviously be playing for the Brawn Tribe.  He plans to bring “spirit” and energy to his team and lift their spirits.

Spencer is an econ major, and will be playing for the Brains team.  He is also a die-hard Survivor fan, and already assessing the competition, he plans to be the “brains behind the operation” and utilize his “chess expertise.”

Lindsey is a stylist and bartender, but she is on the Brawn Tribe.  She looks at Survivor as a chance to finally “do something for herself.”  She 29 years old and the mother of a 16 year old girl, she wants to encourage her daughter to go out there and “make something of herself.”  Lindsey is a bit rebellious, and she plans to “do what she wants.”

Overall this cast of Survivor looks like one of the most bizarre combinations yet, and Jeff and his team have some new and interesting contests up their sleeves for the Beauty, Brawn, and Brains Tribes.