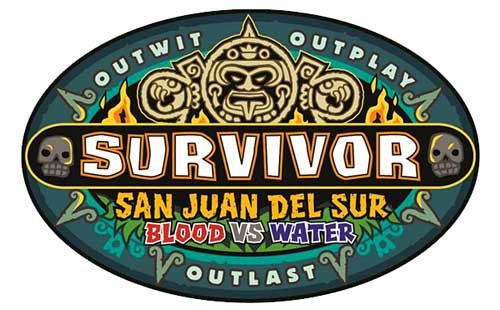 Tonight on CBS their Emmy Award-winning series SURVIVOR airs a special episode before the beginning of its twenty ninth season. On tonight’s show A behind-the-scenes look at the 29th season of “Survivor” in Nicaragua.

For those of you who are not familiar with the show, Similarly to Survivor: Blood vs. Water, the season will feature pairs of loved ones competing against each other but, unlike Blood vs. Water, all of the players will be new. The season was filmed in San Juan del Sur, Nicaragua, the same location as Survivor: Nicaragua and Survivor: Redemption Island. This season saw the return of Exile Island, which was first featured in Survivor: Panama and last used in Survivor: Tocantins. In lieu of a reward challenge, a castaway and their loved one would square off in a duel. The loser is sent to Exile Island, while the winner earns reward for his or her tribe and must send one of their tribemates to Exile Island as well. Exile Island also holds a clue to a Hidden Immunity Idol planted somewhere near the tribal camps.

On tonight’s show we get a behind-the-scenes look at the 29th season of “Survivor” in Nicaragua. Included: interviews with Jeff Probst and the 18 contestants; a tour of the Tribal Council area; and a sneak peek at two of the season’s challenges.

Tonight’s special episode looks like it is going to be great and you won’t want to miss it, so be sure to tune in for our live coverage of CBS’s Survivor: San Juan del Sur – Blood vs Water special episode at 8:00 PM EST! While you wait for our recap hit the comments and let us know how excited you are about the return of Survivor?

RECAP: Tonight’s Survivor: San Juan Del Sur preview kicks off with host Jeff Probst discussing the Blood Vs. Water twist in Nicaragua, this time around the Blood Vs. Water twist will not include Redemption Island. This season they will pit the loved ones against each other. Every episode there will be a one on one duel between the loved ones, the loser of the duel will have to go out to exile. Jeff Probst reveals that this time around on Blood Vs. Water, they will separate the players from their loved ones on Day #1, and there are no returning players this season.

Amazing Race alums Natalie and Nadiya competed in two seasons of the reality TV show, Jeff is confident that their two times on the Amazing Race will have prepped them some for Survivor. Jeff gushes that the sisters are “nutty and good at blending in with others.” Jeff thinks they will do okay this game, and being separated will work to their advantage because together they are too powerful and will pose a threat.

Boyfriend and girlfriend Jon and Jacalyn consider themselves a threat because they are both extremely competitive. Jon is concerned that being a Division 1 football player will make him too athletic and he will have to downplay his strength. But, when he arrived he seen there were several other athletes and he might be okay. Jeff has high hopes for Jon, but he thinks that separated from Jon will hurt Jacalyn and other players will bulldoze her over.

Ex major league baseball player John Rocker and his girlfriend Julie are confident they will do well on this season of Survivor. John is notorious for hateful comments he made in an interview in the 90’s, and he is concerned that someone will recognize him and hold his past mistakes against him. Julie is in it to win it, and she confesses she has no problem voting John out if it means it will get her further in the game.

Broadway actors and boyfriends Reed and Josh are die-hard Survivor fans, and they actually bonded and spent one of their first dates watching an episode of Survivor. Jeff doesn’t know how well they will do when they are separated, but he knows that when they are together they are a force. Jeff thinks that Reed and Josh are both extremely likable, and the players will make a mistake keeping them around until the end because they will have no problem winning over jury votes.

Kelly and her father Dale are sure they have what it takes to win Survivor since they were raised on farms, and they spend the majority of their time outside. Jeff reveals that Kelly and Dale weren’t on speaking terms for many years when her mom left her dad, and he thinks they are joining Survivor so that they can try to rebuild their father-daughter relationship. Dale knows he is the oldest one on Survivor this year, but he thinks that since he is the “old guy” people will keep him around since they don’t think that he is a threat.

Mother and daughter dup Baylor and Missy are die-hard cheerleaders, and now Missy coaches Baylor’s cheerleading squad. Missy brags that her social game is unbelievable, and she thinks that she will be able to befriend everyone. Baylor knows that being only 20 years old and the youngest player this season will mean that people don’t view her as a threat, and that is exactly what Baylor is hoping will happen.

Brothers Alec and Drew have already been dubbed the “Fabio Brothers.” Jeff is sure that Drew and Alex will rub a lot of other players the wrong way because they are so cocky, but Baylor is already interested in forming an alliance with them. Drew is scared that people are going to put him on a pedestal because he is so good-looking and smart, and they are going to see him as a threat and not want to work with him.

Married couple Val and Jeremy are torn between revealing their professions on the show. Jeremy is a fire-fighter, so he plans to tell every one what his job is because he thinks everyone loves firefighters. Val doesn’t plan on telling anyone that she is a police officer, she feels like they always get a bad rep on the show. Jeff thinks Val will be a legitimate threat in the game, as long as she gets partnered up with some other strong players.

Father and son Wes and Keith are also both firefighters. Wes has been watching Survivor since he was a kid and dreamed of joining the show since he was nine years old. Jeff gushes that he loves Keith and Wes and how openly they talk, he thinks that Keith will be a valuable asset in the game and players will want to keep him around. However, he thinks that young Louisiana native Wes might have a tough time reading other people and getting to know people out of his comfort zone.

The Survivor San Juan Del Sur preview ends with a sneak peek of the Survivor contestants trying to complete their first immunity challenge. The First Immunity Challenge this season will be called “Temple of Sears,” the players will have to scale a tower and then climb on each other’s shoulders to untie a “monkey’s fist” and use it to scale up a fifteen foot ramp. When they get to the top they will find a stone puzzle with pieces weighing fifty pounds a piece that they will have to put together.