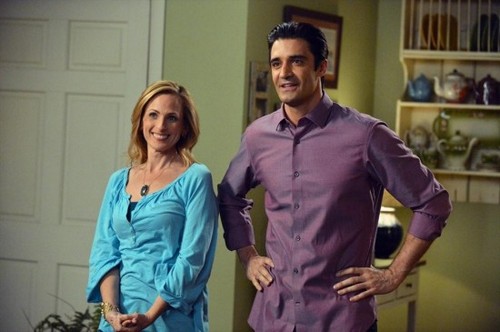 SWITCHED AT BIRTH returns to the ABC Family tonight with a whole new episode called, “Dance Me to the End of Love.” On tonight’s episode a quickstep, a two-step, and a misstep.   “Dancing With The Stars” alums Gilles Marini and Marlee Matlin perform a Viennese Waltz in the danced-themed episode.  Did you watch last week’s episode? If you missed it we have a full and detailed recap here for you enjoyment.

On last week’s episode things went awry when Daphne tried to help Sharee.  Daphne tried to convince Sharee that she needed to find help for her mother. Bay and Toby hatched a plan to get their parents on the same page. Adrianna was at odds with Regina over her new project.  Meanwhile, Melody was confused by Travis’s behavior.

On tonight’s episode Daphne considers pre-med for college and Bay faces the limitations of her injury.  Daphne dances with the idea of pre-med studies and asks for more responsibility at the free clinic, but is it too much too soon? Worried that his hearing girlfriend will lose interest, Travis hesitantly invites her to a school formal even though he doesn’t know how to dance. Bay is left spinning when her teacher demands more of her art, despite her injury.  Meanwhile, John jumps at the chance to win Kathryn over.

RECAP: Toby gets back to his place, he sees his father and it seems that he has a plan on getting Kathryn to love him back. Toby trusts that he’ll be fine and leaves him to it. Melody is talking to Daphne and Regina, Daphne wants to widen her horizons by apply to schools with a strong pre-med program. Melody tells her that these programs are a huge commitment, though if it will help her find out what she wants to pursue she’ll be cool with it. Kathryn is at dance class, she’s not feeling all that good Lorenzo shows up and understands she is sad; though she shouldn’t wallow in her misery and just dance instead. Kathryn begins to dance the class and she seems to enjoy it. Tank is looking in a mirror, looking at him dancing to country music; Bay walks in an interrupts him. Tank is practicing for something upcoming sorority thing; Bay asks to see Tank dance. He’s reluctant at first, but agrees to it and dances for her. Bay says that he’s not bad and can really dance; he says he has hidden talents. Bay tells him they have to go to class; Tank thought she was going to drop the class because of her hand. Melody walks back into the place where she works for probation, people clap for her because of how she saved Dr. J. She wants to have more responsibility to get more experience, but the man tells her that he can’t do that since she fixed a problem she caused and it shouldn’t have happened to begin with. Travis and Mary Beth are talking about what they want to do, she gives ideas of what they can watch and they end up watching a movie at his place Travis sees her texting and asks who she’s texting; Mary Beth says that it’s her friends at the mall shopping for dresses and sending pictures. Travis says he likes to dance, that they should go dancing. Mary Beth says it’s formal and that he needs to dress up for it. Bay painted a finger print onto the canvas, the art teacher has no sympathy for her having a severed tendon in her hand. She’s not impressed with her art piece and gives her until Thursday to redo it.

Travis is worried about the dance, he told Mary Beth he could, but he can’t. Toby says that Travis can learn how to dance in the short while, and tells him not to worry because she’ll be happy that he came. Travis is worried that she’ll prefer to go with a hearing guy; he tells Toby that he needs to learn how to Waltz or Tango. Toby tells him that they’ll figure it out; Travis then adds that he’ll need a suit. Bay is trying to paint once again and is having a hard time with it; Angelo shows up and asks how her hand is. Angelo picks up the painting and says it’s a good start, Bay says that it’s not good enough; that she can’t paint with her feet or anything, only with her hand. Bay walks off, Toby shows up and tells Angelo don’t take it personally because she’s going through a lot. Toby then brings up that Angelo can help someone in need if he’s got the time, Angel agrees. Angelo ends up teaching Travis how to dance. Melody walks in and sees Angelo teaching Travis how to dance. Toby tells Melody about what they’re doing, Angelo asks is she can dance and she says a bit. Angelo uses Melody as his dance partner to show Travis how dancing with a woman is done. Angelo finishes and says it’s easy, Travis still looks confused.

Kathryn is on the phone talking to someone; as soon as John walks in she hangs up. John bought Kathryn something she opens it and bought a diamond bracelet, it turns out that John ended up buying a gift he’s already bought her before. John wants to know if there’s anything he can do to help her be happy, she says that maybe she’s having a crisis of some sort or is depressed. She wants her life to have a bit more adventure and to be less boring that it currently is, she says she has to go. Kathryn hands the gift back to John and leaves. John looks like he’s lost hope, he comes out and sees Lorenzo. John tells him that ever since Kathryn met him that she’s all of sudden lost interest in him, Lorenzo says that he’s blaming people for his problems and making excuses to not change. Bay is outside looking at empty pages, Emmet appears and tries to help her come up with ideas for art. Emmet tells her that she’s an artist and that will never change, he sits down and asks if she’s free tonight because he wants to show her something. Emmet says he’ll pick her up at six and walks away. Daphne is sitting down, Horhay says that he was too harsh to her and that it wasn’t professional of him. He tells her that he as something to show her, he introduces a young boy named Sammy to Daphne. Horhay helps out with the kid, he leaves with the mother to check if her insurance can cover it. Daphne is busy trying to get something for Sammy, she couldn’t hear Sammy having a seizure. The mother insults Daphne for being deaf, Horhay comes in to the rescue to help. Travis is practicing by himself how to dance, it seems that he’s really trying hard, but is getting frustrated. Emmet takes Bay to a secret place of his. Emmet takes her to a place that’s replica built of Las Vegas in the 50’s. He says that being an artist doesn’t mean that she needs to rely on memory. It then cuts to Emmet and Bay dancing. Though it seems that was only in her head, it then cuts back to reality.

Toby gets back to his place late at night and sees John watching TV, he asks about how he was the man with the plan and how it went. John says it didn’t go well, that Kathryn is changing or is changed. He says when that happens it could lead to them splitting up, he hopes that it doesn’t happen. John tells Toby, no matter what happens they’ll always be his mother and father. He understands that he must be bothering Toby living in his place, Toby says it’s okay and goes to bed. John begins to watch dancing on TV. Daphne arrives home, Regina and her mother want to celebrate on her trying to become a doctor, but Daphne isn’t feeling great after what happened at the doctor’s office. Travis meets up with Mary Beth, he confesses to her that he doesn’t know how to dance and that he sucks at it. Mary Beth doesn’t mind it, she says that there’ll be things that they will miss out on because he’s deaf; though there’ll be opportunities for other things. Horhay asks if Daphne can come with her, then it breaks out into a dance number for some unknown reason; turns out the whole thing were a nightmare. Looks like Daphne is afraid of Horhay having some mad dancing skills.

Bay shows her art teacher, the pictures of the show girl in a form of movement. Since she’s not able to paint anymore, she explains why she chose to use this art form. The teacher is proud and impressed that she’s learned how to make art and not use excuses. Toby wakes up looking for his father, turns out that he’s not that. Toby begins to dance alone in his apartment. Dr. J is in the hospital eating some good pudding, Daphne arrives to visit him. Dr. J tells her to sit, which she listens and does. Dr. J says that he’s found out that she currently wants more responsibility at the clinic. Daphne says that she’s changed her mind, because she’s deaf and it’s difficult. Dr. J tells her that there were only nine African Americans in his med class, and that two only graduated. The moral of his story is that, no one is going to hold her hands throughout her journey of pursuing what she love; that she needs to believe in herself in order to move on and become happy.

Daphne talks to Bay about her art piece that Emmet told her about. Bay says that it isn’t hers because Emmet was the one who was behind the mechanics and putting together, that she only had the idea of doing it. Bay needs to leave, she sees Angelo and apologizes to him. Angelo tells her that he learned during the summer, that if she’s willing to yell at him then she’s his daughter. Angelo has a surprise for Bay and asks for her to get the family together. The entire family get together for a dinner, then Toby begins the start of a beat. The rest join in, I don’t know what’s going on but it’s another dance number.