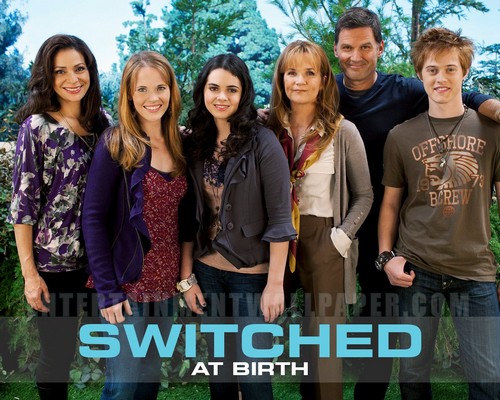 SWITCHED AT BIRTH returns to ABC Family tonight with a brand new episode called “You Will Not Escape.” On tonight’s episode, Daphne rallies the troops for senior ditch day at Carlton, but the rebellious move leads to chaos. Meanwhile, Bay takes an interest in Angelo’s family-medical history; and Kathryn invites Regina to an author party in New York City.

On the last episode when Bay offered to be moral support for Tank (guest star Max Adler, “Glee”) as he met his father for dinner, she found that she may have bitten off more than she could chew. Toby continued to stir things up with Lily (guest star Rachel Shenton, “Hollyoaks”), yet a conflict regarding a make-up test for Sharee raised unwanted confrontation between the two. Meanwhile, Daphne and Travis made life-changing decisions when they found out their admission results from Gallaudet University. Did you watch last week’s episode? If you missed it we have a full and detailed recap, right here for you.

On tonight’s episode, looking for a distraction, Daphne organizes a senior ditch day for her Carlton classmates, but things get out of hand. Bay meets with Angelo’s doctor to discuss their family medical history. Meanwhile, Kathryn brings Regina to her book publisher’s author party in New York.

Tune in to ABC Family at 8PM EST to watch “You Will Not Escape” we’ll also be recapping it all live for you right here. In the meantime head to our comments section and tell us your thoughts on season two so far and enjoy a sneak peek of tonight’s episode below.

Angelo’s insurance policy kicked in and Daphne wants no part in what she’s termed “blood money”. And, frankly, at this point she doesn’t need much to be angry at Regina so she’s warned her mother not take the money as well.

Regina just can’t win with her and their home has become a battle zone. When Daphne isn’t being rude and borderline disrespectful then she’s calling her mother a murderer. So Kathryn’s trip really couldn’t come at a better time. Kathryn needs to fly to New York for her book’s publication and seeing as John doesn’t like those types of events; she invited Regina to come with her instead.

And Regina couldn’t say no to such an offer. Right now her boss doesn’t need her interior designing skills (what with them only breaking ground) and so she has plenty of free time on her hands. Or does she?

Is running away from Daphne’s wrath the best choice for Regina’s relationship with her daughter? After all her daughter grows more out of control by the minute. Daphne arranged a Senior Ditch Day for herself and her classmates. And it was supposed to be day for fun at the ranch yet Daphne invited some of her new friends like Nacho to hang out with them.

Nacho’s idea of fun involves beer and what he refers to as hanging out (his definition I’m sure doesn’t mean the same thing to the suburban kids) but if Daphne can’t see the danger then it’s good thing that Bay at least can. Bay told Daphne that being around Nacho isn’t worth pissing Regina off. If she wants to rebel then choose something else. Preferably, not the guy that threw a brick through their mother’s window and referred to her as a whore to their faces!

And Bay’s problems don’t end there. The girl that Matt was using to catfish Emmett is also at the ranch for her Senior Ditch Day. It seems she’s single after reading all the messages Emmett sent “Mandy”. She told Bay it made her realize what true love is after hearing all the sweet things Emmett had to say hence when she saw Bay she asked if Emmett happened to also be in the area.

He was and due to poor timing he ran into her while Bay was calling back the hospital. She had worked up the nerve to get an MRI done and now it’s all about waiting for the results. So missing the phone call from them shook her up…very badly. By time she had found Emmett – he was speaking to the girl and it made her flip. She told Emmett he could speak to whoever he wants. She then went on to say that maybe it would be best if he didn’t get dragged into another one of her messes.

Bay wanted to leave the ranch from then, but Sharee stopped her. Daphne has been drinking nonstop and Sharee was worried about what the other girl could do. So she enlisted Bay and the two of them found Daphne throwing herself at Travis. Which is just downright inappropriate – she knows he has a girlfriend and simply wants to ignore that fact because Nacho brought his sidepiece with him to the ranch. And Bay had had enough. She finally called Daphne out on being a brat and told her everyone was sick of her juvenile behavior.

How did Daphne respond to that? She pushed Bay practically to the ground and then walked away as if she was the injured party. Thankfully, Sharee gave the inebriated Daphne a ride home.

Daphne seems to think her mom is a different person than the one she remembered and that she has to find a way to forgive her mom for that, but Regina has never treated her daughter like the way Sharee’s mom treated her. Her mother isn’t mentality unstable and if anything Regina felt guilt about enjoying herself on the trip with Kathryn. To shake off one of Kathryn’s exes, the ladies pretended to be lesbians and ended up having fun flirting with each other and exchanging a kiss. So Daphne shouldn’t compare her situation with Sharee’s.

Angelo died from an aneurysm and no one could have changed that. The only good thing to come out of the wreckage was that Bay got tested and she showed no signs of developing an aneurysm of her own despite her family’s history. Finding out that she was in the clear took the pressure off and knowing that she does have a future made her actually invested. Up till then she was putting off thinking about college but with a good bill of health – she came up with a plan. She’s going to follow Emmett to USC.

He got into the film program and Bay encourages him to follow his dream. She thought it was such a good plan that she decided to also follow his dream until eventually she finds one of her own.

And Travis almost gave up getting his diploma because he thought a job at the docks was all he was worth but Melody with Regina’s help created a deaf program that would be perfect for kids like him so she made sure he was still enlisted in school and he wasn’t dumb enough to fight her on it.

Regina helped build that program with the insurance money yet Daphne still isn’t happy. She told Regina that she’s not her real mother and that she’ll never be her mother. She said it after Regina stopped silently condoning her behavior by just sitting back and taking it. Once Regina tried to defend herself – Daphne used the words she knew would most hurt her mother. Because that’s who she is now!