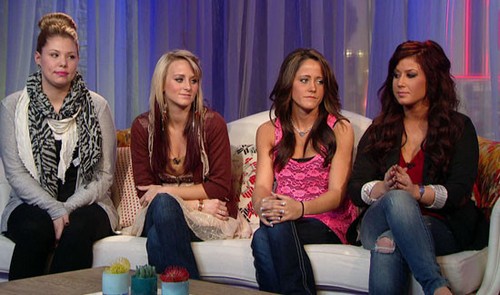 Tonight on MTV the new season of TEEN MOM 2 kicks off.  Season 5 will have an abortion, drug arrests, marriages, marriage breakups and new babies.  Which translates into a whole lot of drama.   The Teen Moms are: Jenelle Evans, Chelsea Houska, Kailyn Lowry-Marroquin and Leah Calvert and we will get to see their life unfolding and each of them trying to get their lives on track.

In the past Teen Mom episodes have been filmed several months before they air on television, and by the time we see them it is all old news. But, not this time. The Teen Mom 2 girls just finished filming Season 5 during the last few months, and this season will feature current events in the girls’ lives.

Teen Mom 2 is a spin-off of the MTV documentary series “16 and Pregnant.”  The show follows the stories of four girls from the second season of “16 and Pregnant” and documents the challenges of their first years of motherhood.  Each episode interweaves stories of four teenage girls who are navigating the bumpy terrain of adolescence, growing pains, and coming of age – all while facing the responsibility of being a young mother.

Tonight’s Teen Mom 2 season 5 premiere is going to be exciting, and you won’t want to miss. While you wait for our recap, hit the comments and let us know how excited you are about the season 5 premiere of Teen Mom 2.  Check out a Sneak peek video of tonight’s episode below!

The Teen Mom 2 Season 5 premiere opens with Jenelle discussing her relationship with her husband Courtland Rogers. Courtland is still in jail, but Jenelle is out on bail. She hasn’t been going to school or work because she is “trying to stay sober.” She has decided she is “done with Courtland.” She says it was Courtland’s fault she relapsed, and she is mad at herself for marrying him so soon. She just went to the doctor, and she found out she is pregnant. She has decided that “it wouldn’t be fair to Jace” to have another baby and she is going to get an abortion. Her Mom is going to drive her to Raleigh to take the abortion pill.

Since Season 4 of Teen Mom 2 Leah and Jeremy have had another daughter named Adalynn. Corey has moved on too, he is about to marry his girlfriend Miranda. Ally has been diagnosed with a rare form of muscular dystrophy, and the disorder affects her respiratory system. Even though she is walking right now, once she gets larger she probably won’t be able to continue walking.

Chelsea Houska never finished beauty school at Black Hills because she decided it wasn’t what she wanted to do with her life. Her baby-daddy Adam Ling just got out of jail after receiving his third DUI, and his girlfriend Taylor is 8 months pregnant now. Chelsea has just decided to go to a new school to study something different. Chelsea confesses to her Dad that she doesn’t like the idea of Aubree having a half-sister. She has plans to meet up with Adam for lunch and discuss how his new baby is going to affect their daughter.

Kailyn ‘s husband Javi has finished training and is stationed in Delaware. He visits them on the weekends, Kailyn wants to move closer to him but she needs to get permission from the court first. Kailyn is currently four months pregnant, and today is her baby-shower. Isaac wants a baby-sister, but they are waiting until the baby is born to find out whether it is a boy or girl.

Chelsea and her friend Megan are excited to start going to school together. Megan and Chelsea discuss Adam having another baby with his new girlfriend. Aubree has no idea, and Chelsea doesn’t know how to explain it to her. She is scared that Adam is going to spend more time with his new baby than he did with Aubree.

Corey’s wedding is tomrorrow, and he is picking up the twins from Leah’s house so they can be in the wedding. Corey tells Leah about his wedding plans, and Leah reassures him that she is “happy if he is happy.” Corey is glad that his daughters will have two “good step-parents.”

Kailyn is exhausted, she is four months pregnant and working a full time job as a dental assistant. Now, she has to drive Isaac to his Dad Jo’s house. Kailyn just submitted a petition to court to get permission to move three hours away from Jo, so she can be closer to Javi. Jo says that regardless of the fact that it is only three hours away, he is still going to try to fight it.

Jenelle is talking to her Mom Barb about going to take the abortion pill tomorrow. Her Mom thinks she is making the right decision, but she needs to get on birth control. Jenelle says that she is going to “turn her life around,” and “go back to school.” Her Mom reminds her she still needs to wait and see what happens in court, following her latest arrest with Courtland.

Corey and his new wife Miranda are hanging out with the twins. Their wedding was a success, and both the girls walked down the aisle.

Chelsea is meeting Adam for the first time since he got out of jail. Adam says he talked to Aubree about his girlfriend Taylor having a baby. Adam says that he pays child-support, so he wants to see Aubree more. He calls Chelsea a “dumbass,” and says that he is taking her to court for visitation. Chelsea accuses Adam of just taking her to court to “make people think he is a good Dad.” Adam curses her out and storms out of the restaurant.

Kailyn and Javi are baby shopping. Kail doesn’t want to buy a bunch of stuff and then move it to Delaware, and then have the courts say that she can’t move to Delaware and have to move all of the baby stuff back home.

Jenelle, Jace, and her Mom are heading to the clinic to get her an abortion. The clinic is three nights away so they are driving up the night before and staying in a hotel, and then going to the appointment in the morning. In the morning while Jenelle is getting ready Jace goes on a swearing rant and won’t stop saying “F—K.” Jenelle’s Mom lectures her about swearing in front of Jace, she is scared when he starts daycare he is going to swear at the kids and teachers.

Lean and her husband Jeremy are out to dinner, Leah explains that she is happy for Corey, and she thinks her and Corey made the best decisions for their kids. Jeremy is in a rush to leave though because he wants to get back home to his daughter Adalynn.

Chelsea fills her friend Megan in on her talk with her ex Adam. She thinks Adam is “crazy” and she is disgusted that she has to deal with him for the rest of Aubree’s life. They head to Chelsea’s Mom’s house, and Chelsea tells her Mom that Adam is threatening to take her to court again/still. Her Mom encourages her to “be civil with Adam for Aubree’s sake.”

Kailyn is at a pottery shop with her friend. She is still stressed about court, Jo is fighting their relocation. If the court sides with then Javi will have to live in Delaware four nights a week, and then head home to be with Kailyn and Isaac on the weekends.

Jenelle and Barbara are back from the abortion clinic. Jenelle already took the first dose of the abortion pill, and now she is tired. Tomorrow she has to take two more pills and let them dissolve in her mouth for an hour, and then her uterus will start contracting and she will miscarry. Jace is running around the house saying f—k. Jenelle tells her Mom that she and Jace are aggravating her, so Barbara reminds her that she drove her three hours to the clinic, paid for a hotel, and paid for the abortion. Jenelle calls her a b—h.

Besides Kailyn being pregnant and trying to move out of the state, overall none of the Teen Mom’s storylines have really changed. Chelsea is still arguing with Adam over custody, Leah and Jeremy are still happily married, and Jenelle is still “getting her life together” and saying she is “going back to school and trying to stay sober.”