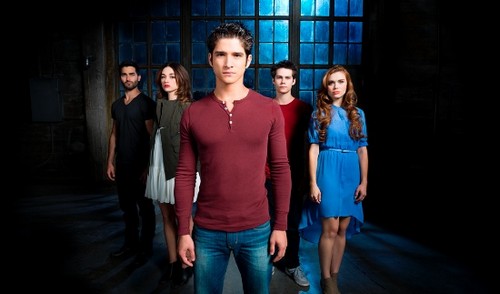 Tonight on MTV the popular show TEEN WOLF returns with the second part of its third season called “Anchors.” On tonight’s show, Sheriff Stilinski searches through old cases. Did you watch the last episode before the hiatus? We did and we recapped it here for you.

On the last episode before the break, Scott, Allison, and Stiles awakened with the answer they seek, as well as discovering their involvement with each other and the strong bonds they share. The final battle between Deucalion and Jennifer came to pass with surprising insights, unfolding from start to finish. Enemies became friends, allegiances crumbled, and as they soon learned . . . . ”The past is not dead. In fact, it’s not even past.”

On tonight’s show, Scott, Stiles, and Allison suffer side effects from the ritual sacrifice; Sheriff Stilinski searches through old cases to see how the supernatural world (which he now knows about) might be able to explain the “unsolved” mysteries of his past.  It looks like Scott has a love interest in 3B, and it’s not Allison! Arden Cho has joined the cast of Teen Wolf as Kira, and in the trailer she is making out with Scott McCall!

Tonight’s season 3 episode 13 is going to be an exciting one that you won’t want to miss, so be sure to tune in for our live coverage of MTV’s Teen Wolf at 10 PM EST! While you wait for our recap, hit the comments and let us know what you think of Teen Wolf season 3 this year. Check out the sneak peek video of tonight’s show below while you wait for the recap!

Stiles is sleeping in bed. He’s having a nightmare and whining in his sleep. He’s scared, and he mutters, “Don’t let them in!” Next, we see him trapped in a locker. He bangs on the door and, when he finally breaks free, we see that he’s in the school. This appears to be a dream. He walks into the school hallway to find an open door. He approaches the door and walks into the classroom, which is in shambles, and housing the tree trunk of the Nematon. He touches the tree, but as his hand nears the bark, the vines snap his hands. He wakes up.

GASP! Lydia is in his bed. She wakes up and asks if he’s all right. Stiles asks what she’s doing in his bed. Another door opens up. He goes to check it out, all while mumbling, “What if they get in?” Lydia is saying, “Don’t go in there,” but Stiles does, only to find the same tree trunk in a wooded area.

He finally wakes up from his dream-within-a-dream.

Stiles meets Scott at school, where he tells him about his strange dream. Stiles tells Scott that he thinks what they did that night at the Nematon is, somehow, still influencing them.

Scott gets ready for school and Isaac is there. Isaac regrets having feelings for Allison and asks if Scott is mad at him for wanting to kiss her.

Stiles also gets ready for school, as does Allison.

Allison gets in the elevator to leave her apartment. But as she descends the elevator, she grows cold and can see her breath materialize in front of her. When the elevator doors open up, she’s back inside the hospital. Lights flicker. Doors slam shut and open. She’s in the morgue. She sees Kate Argent’s cabinet and has flashbacks to Kate wanting to kill Scott.

Allison pushes through a door in the hospital and, suddenly, she’s at Beacon Hills High.

Scott arrives at school on his dirt bike. As Scott runs through the sun, his shadow takes the shape of a gargantuan wolf. He bumps into Stiles, who asks him if everything’s all right. Allison and Lydia join them, and they realize that the hallucinations are happening to all three of them. Lydia is excluded because she didn’t “die and then come back to life.”

The gang is introduced to their new history teacher, Mr. Yukimura, who’s the father of new girl, Kira, who already seems to have caught Scott’s eyes.

Meanwhile, Scott can’t “turn off” his glowing eyes — he can’t control his wolf form. Stiles confides in Scott and he admits that he, too, is having very “real” hallucinations. He can’t read — he can’t read a thing in the waking world. Words jumble together.

Lydia helps Allison with her archery. Ever since the incident, she’s had shaky hands. But she doesn’t have much luck with her attempted rehab. Lydia urges her to close her eyes and breathe. When Allison closes her eyes and opens them, she sees a mysterious lady running through the woods. It’s Kate. Kate runs at Allison. Allison prepares to shoot her, but when she opens her eyes, she realizes the she’s almost killed Lydia. Luckily, Isaac is there to catch the arrow.

Meanwhile, Sheriff Stilinski is going through his old files in attempt to look for old cases that might have been connected to the supernatural. All the files are marked “Agent McCall,” which means either Scott’s dad suspects the supernatural is at play here or he’s about to get all up in this town’s paranormal business.

Stiles sits in class and, suddenly, everyone starts doing sign language. Stiles wakes up and Scott’s concerned for his sanity. Stiles says, “It’s all right, I just fell asleep.” But Scott says that he didn’t fall asleep. He was awake.

At lunch, the gang talks about their near death experiences and new girl Kira comes to enlighten them a bit on the spiritual natures behind their journeys.

Scott and Stiles go to visit Dr. Deaton, who tells them that the things they’re experiencing sounds like their subconscious minds, essentially, attacking them. He tells them that they need to find a way to “close the door” between those two worlds if they’re to heal.

Stiles’ father visits Stiles and Scott as they leave the vet’s office. He says that several years ago there was a family that was a girl that was murdered, and he thinks it may have something to do with a werewolf — one who might still be at large. Sheriff Stilinski needs Scott’s help to help locate this potential baddie.

Stiles’ dad drives to a man’s house to visit some guy named Tate. Stiles and Scott sneak around while the man is being occupied. Scott begins smelling everything, but all he smells is some dog. Sheriff S tells the man that he thinks it may be murder that took his daughter and wife from him. The man gets upset.

Back at home, Scott’s dad says that he’s filing a case for impeachment against Stiles’ dad because of his “lack of ability to close cases.” Scott has trouble controlling his anger and his claws come out, ready to attack his father. His mother takes him away and tells him he needs to control it, that he needs to find an anchor. Scott says he can’t, that Allison was his anchor. His mother says that he needs to be his OWN anchor, and to always be open to the possibility of future loves.

Scott barges into Stiles’ room with a flashlight. “We’re going to find a body. A dead body.” They’re going to see if they can help Sheriff Stilinski close this case, which will hopefully help him keep his job.

Isaac and Allison are making out. Um, yeah, Scott’s going to hate this. But then she wakes up. Another dream. Gah! This episode is making us crazy!

Stiles and Scott go out to look for the body, but they’re not having much luck. Stiles asks for the flashlight. They’re looking for something — the car that crashed all those years ago. They find it. There are claw marks on the car. Werewolf claw marks. There’s a loud growling noise. “Please tell me you see that,” Scott says to Stiles. Scott runs after whatever it is he saw. When he chases down the creature, he finds a young wolf (in full form). “Malia?” he asks. The young wolf’s eyes glow blue.

Before the episode ends, we see Derek and Peter being tortured and electrocuted.