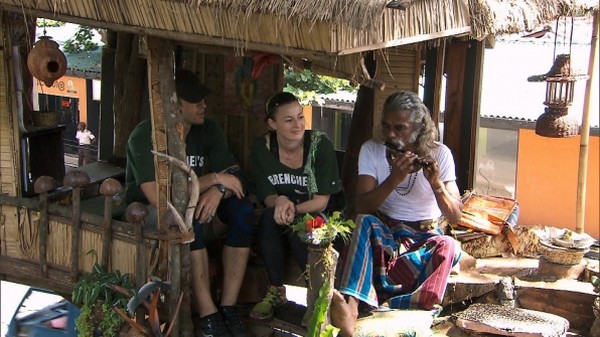 Tonight on CBS the Emmy award winning show The Amazing Race returns for yet another exciting instalment. On “Down and Dirty,” the race continues in Sri Lanka where an exhausting Roadblock drains the participants of their strength. Later, a race through the countryside ends with a breakneck rush to the pit stop.

On last episode  the race continued in Colombo, Sri Lanka, where teams went fishing to receive a clue.  At the end of the episode Mom & Son team, Margie and Luke were the last team to arrive at the pit stop, they were eliminated from the Amazing Race.  Did you watch last week’s episode?  We did and we recapped it right here for you.

On last week’s episode the teams are in Sri Lanka, where an exhausting Roadblock drains the racers of all their strength. Also, an epic race through the countryside ends with a footrace to the Pit Stop.

On tonight’s episode of Amazing Race, Dave and Connor will be departing first, followed by Caroline and Jennifer. The racers’ first stop tonight is the Dutch Museum in Sri Lanka. Jet and Cord and Leo and Jamal depart next and head to the museum. Once they all arrive they have to camp out in front of the museum and wait a few hours until the doors are unlocked. All of the teams are now neck and neck, regardless of what order they departed in. The museum finally opens and they all get their next clue instructing them to take a train to a gas station in the city of Alawwa.

The racers arrive at the gas station in Alawwa and it is their next road block. One member of each team has to navigate through hundreds of tiny three-wheeled taxis in a traffic jam, and find the cars labeled with their designated color and take them to the gas pump and fill their gas tank. Rachel completely misunderstands the challenge, and winds up filling every single green car, instead of cars that have a green flag in their window. Rachel thinks that she has completed the competition, but the gas station attendant keeps telling her she hasn’t done enough “green cars.” After she fills another wrong car, John finally takes her aside and shows her that she is filling the wrong cars. Meanwhile the other teams are now almost done with the roadblock.

Big Easy is physically moving the tiny taxis and he uses his size to dominate the competition and finish first. Big Easy and his partner Flight Time receive their next clue and head to the train station. They must travel by train to an elephant sanctuary in a town called Rambukkanna. Jessica and John, Jen and Caroline, Leo and Jamal, Dave and Connor, Jet and Cord all make it to the train station and board the train together. At the very last second Brendon and Rachel show up and hop on the train. All of the racers are neck and neck again, and will be arriving in Rambukkanna at the same exact time.

They all race off the train and hop in tiny three-weeled taxis and instruct their drivers to take them to the elephant sanctuary. At the elephant preserve they find their detour. The teams have two choices, they can either make paper out of elephant dung or work with trained elephants to move three logs from one destination to the next.

Jet and Cord finish the detour first and receive the next clue instructing them to take a taxi to a rest-house and “let their ears guide them to the wise man.” Dave and Connor and Flight Time and Big Easy both hop in taxis and head to the wise man. Caroline and Jen and Brendon and Rachel are still making paper out of elephant dung.

Jet and Cord find the wise man first and he makes them sit down with him and plays them a song with a flute. When the song is over he gives them a clue telling them to head to the pit-stop at Hotel Beach. Leo and Jamal are literally 5 seconds behind Jet and Cord and the two teams race to the pit-stop.

Meanwhile, Brendon and Rachel and Caroline and Jennifer are just finishing their elephant dung detour, and the two teams are currently tied for last place. They receive they clue and head to find the wise man.

Leo and Jamal and Jet and Cord arrive at the hotel at the same time and must race by foot to the pit-stop. Leo and Jamal finish the race in first place, and Jet and Cord arrive seconds behind them in second place. Jessica and John arrive in third place and Dave and Connor finish in fourth place. Brendon and Rachel arrive in 5th place. Flight Time and Big Easy finish in sixth place. Caroline and Jennifer are the last team to arrive at the pit-stop. However, once they arrive they learn this is a non-elimination round this week, so they will not be going home