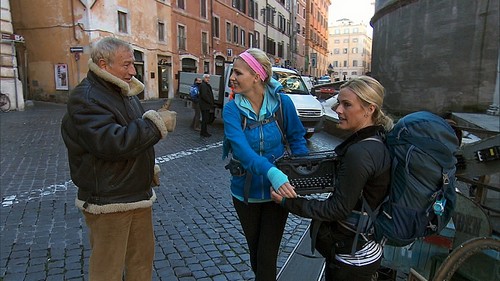 Tonight on CBS the Emmy award winning show The Amazing Race returns for yet another exciting installment. On “The Gladiators Are Here!”  the race continues in Rome where a Detour requires the duos to dress as gladiators and battle. Also, three teams strike a deal to try to avoid elimination.

On last week’s episode the teams were in Sri Lanka, where an exhausting Roadblock drained the racers of all their strength. Also, an epic race through the countryside ended with a footrace to the Pit Stop.  At the end of the race Caroline and Jennifer were the last team to arrive at the pit-stop. However, once they arrived they learned it was a non-elimination round this week, and they will not be going home.

On tonight’s episode teams race to Rome, Italy, where Racers and Roman gladiators square off in a medieval Detour. Plus, three teams strike a deal in order to try to avoid elimination.  By the end of the show one pair will be going home.

Tonight’s episode of Amazing Race begins in Sri Lanka, India where the contestants will be starting the 7th leg of the race. Leo and Jamal are the first team to depart and they need to “fly to the eternal city,” which is Rome, Italy.

Leo and Jamal head to a travel agency to book a flight to Rome. They land a direct flight that is departing at 1:20. Meanwhile Brendon and Rachel are departing from Sri Lanka, they think the eternal city may be in Ethiopia. Flight Time and Big Easy depart immediately after them. Luckily Brendon and Rachel arrive at the same travel agency as Leo and Jamal, and learn that the “Eternal City” is actually in Rome and not Africa.

The Sri Lanka flight arrives in Italy and all of the Amazing Racers were on that flight. All of the teams begin racing to get taxis and find the bridge where the next clue is. When they arrive at the bridge a detour. The teams must either learn the sword fighting skills to be a gladiator, or race a remote control horse and chariot around a track before the flame goes out.

Caroline and Jennifer receive their Speed Bump, since they finished in last place last week. Before they can complete the detour they must race to the Pantheon in Rome and find an antique keyboard.

Jessica and John arrive at the Detour and decide to do the Gladiator challenge. A swordsman begins training them and teaching them sword-fighting moods. Brendon and Rachel have decided to do horses and chariots, but Rachel is disappointed when she realizes they are not real horses. Leo and Jamal joined Brendon and Rachel at the chariot races, and after a few frustrating attempts they decided it would be a wiser decision to do the Gladiator challenge. After they leave Brendon and Rachel all of the other teams begin arriving at the chariot races.

Meanwhile Caroline and Jennifer finally finish their speed bump and head to the detour. Jessica and John are the first team to complete the detour, now they must head to the Piazza Di Spagna. They hop in a taxi and head to their next destination.

Brendon and Rachel finally finish the Chariot challenge and head to the Piazza Di Spagna in second place. Leo and Jamal are just arriving at the Gladiator challenge and begin learning how to fight with swords. Caroline and Jennifer arrive at the chariot detour as the Globetrotters are leaving.

Jessica and John’s taxi player took them to the wrong location, they are currently lost. Brendon and Rachel are the first team to arrive at the Piazza, and they receive a Roadblock. One of the members of the team have to count over 1,000 steps up to the statue, add them to the year that the statue was resurrected, and then change the sum of the two to Roman numerals in order to get their next clue. Brendon decides to take this Road Block while Rachel cheers him on.

As John and Connor arrive at the Piazza, Brendon and Rachel complete the challenge. Brendon and Rachel head to the Pit Stop and arrive in first place. Meanwhile back at the detour Dave has made it to the top of the steps, however he doesn’t know Roman numerals. Caroline and Jennifer arrive at the Road Block and are excited to see Dave and Connor there, Caroline and Dave work together and complete the detour. Caroline and Jennifer finish the race in 2nd place, and Dave and Connor finish in 3rd place.

Leo and Jamal arrive at the Pit Stop in 5th place. Flight Time and Big Easy arrive in 6th place. Jessica and John arrive in 7th place and they have been eliminated from this season of the Amazing Race.