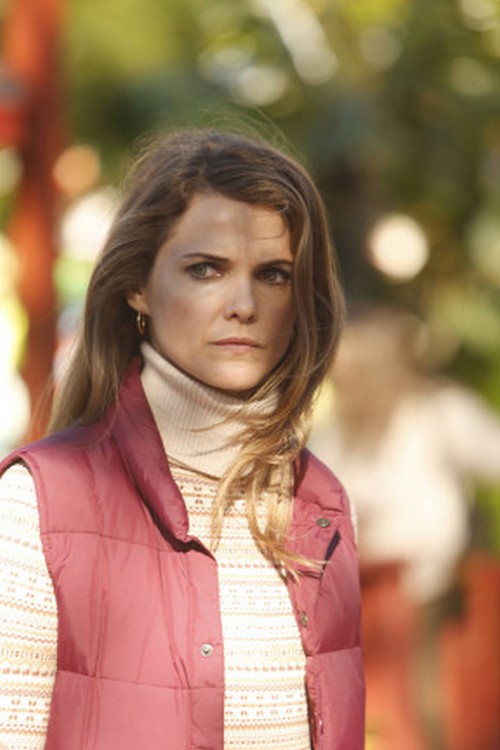 Tonight on FX THE AMERICANS return with its second season premiere called, “Comrades.”   I am really excited the first season was an intriguing one and I am sure we can expect an equally amazing season 2 — if the brief, intense teasers are anything to go by.  On tonight’s episode Stan continues to fall for the Russian agent who has started to play him.  Did you watch the season 1 finale?  if you want to get caught up before tonight’s premiere, we have you covered with a full and detailed recap right here.

If you’re new to the show, here’s some more information on the premise: The Americans is a period drama about the complex marriage of two KGB spies posing as Americans in suburban Washington D.C. shortly after Ronald Reagan is elected President. The arranged marriage of Philip (Matthew Rhys) and Elizabeth Jennings (Keri Russell), who have two children – 13-year-old Paige (Holly Taylor) and 10-year-old Henry (Keidrich Sellati), who know nothing about their parents’ true identity – grows more passionate and genuine by the day, but is constantly tested by the escalation of the Cold War and the intimate, dangerous and darkly funny relationships they must maintain with a network of spies and informants under their control.

On tonight’s premiere Elizabeth comes back from her injury and straight into what should have been a routine mission – but it goes awry, leaving her and Philip in fear not only for themselves but for their whole network… and family. Paige’s suspicions have only grown in her mother’s absence. Meanwhile, Stan continues to fall for the Russian agent who has started to play him.

Tonight’s episode looks like it is going to be a great episode and you won’t want to miss it, so be sure to tune in for our live coverage of FX’s “The Americans” Season 2 premiere at 10 PM EST! While you wait for the recap, check out our sneak peek video of tonight’s episode below!

Tonight’s episode of The Americans opens in a cabin in the woods. Elizabeth Jennings is leaving, after nearly hitting a herd of deer with her car, she makes it out of the woods.

Phil is meeting with some Afghans discussing a weapons exchange in the kitchen of a restaurant, he kills the leader, his translator, and a random chef in the kitchen and then walks out of the restaurant, after he tells them “Allah can’t help you.”

Elizabeth arrives home with Phillip and her kids rush out to greet her. They head out to their son’s birthday party. Stan arrives and Phil secretively gives him his “refund.”

Phil surprises his son with a telescope for his birthday, Henry seems less than thrilled. He actually wanted a video game for his birthday. Henry wants to go set up his telescope, but Phil says he has to wait until tomorrow because Abby is coming over to babysit so he and Elizabeth can go on a date.

Paige is home going through her Mom’s suitcase, while her parents out. Henry catches her and she says she is just surprising her Mom and doing her laundry for her.

Phil gets done with his “airport security” mission and he and Elizabeth head home. On the way home he confesses he had “a thing” with some Afghans and it went bad.

Paige gets up in the middle of the night and thinks her parents didn’t come home, she checks their room and walks in on them having sex. She slams the door and runs back down the hallway.

The next morning Phillip, Elizabeth, Henry, and Paige sit down at the table to eat breakfast together. Phillip and Elizabeth lecture Paige about “privacy and respect” and ask her why on Earth she would “open a closed door.” Paige apologizes profusely for walking in on them last night.

Stan is signing paperwork and staring at the map and mugshots on the wall, Frank reminds him that “trails go cold.” The secretary barges in and says a man is there to see him, Stan excuses himself from the office. He heads downstairs and finds Samford, demanding his $500,000.00. Stan reminds him that none of his leads panned out, so the agreement is null and void. Stan kicks him out, and tells him not to come back. Stamford insists that everything he said was the truth as he gets shoved in the elevator.

Stan borrows some pirated VHS tapes out of the evidence room and takes one home to watch with Nina. Nina doesn’t like the movie, because she doesn’t believe Meryl Streep’s acting. Somehow she thinks that Stan is sending her mixed signals and he thinks she “is a whore.”

Nina meets with Arkady and fills him in on Stan. He wants Nina to tell Stan that she loves him, but she thinks it is better if she waits for him to say it first. Nina and Arkady meet with Oleg, and tell him to find something legitimate that they can give to the Americans, but not something useful.

Elizabeth, Phillip, Paige, and Henry head to an amusement park. Phillip and Elizabeth leave the kids at the park to go to a hotel room and meet their counterparts Emett and Leann and their kids after the drop. They walk in and realize someone has murdered the entire family. Phillip opens their safe and takes out the piece of paper written in code, and Elizabeth rushes back to the amusement park to get Henry and Paige, afraid they are in danger.

They head back home and Phillip deciphers the papers he found in the hotel room. He tells Elizabeth it is nothing out of the ordinary, just surveillance, but there is an address about two hours from Virginia and he is going to go check it out. He leaves Elizabeth home with the kids and heads to the address to see if he can figure out who killed Emett and Leann.