BY Amanda Austin on March 12, 2014 | Comments: one comment
Related : Recap, Television, The Americans 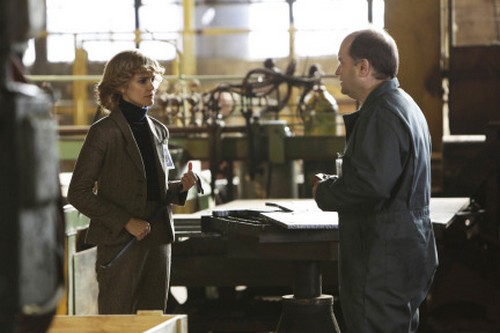 Tonight on FX THE AMERICANS continues with another new episode called, “The Walk In.”  On tonight’s episode Philip questions Elizabeth’s readiness for action. Meanwhile, Stan becomes more attached to Nina.  Did you watch last week’s season 2 premiere?  We did and we recapped it right here for you enjoyment.

On last week’s episode as Philip investigated the fallout from the last operation, Elizabeth stuck close to home, concerned for her family until she got a mysterious distress signal. Meanwhile, a walk-in arrived at the Rezidentura – providing both Nina and Stan with unique opportunities.

On tonight’s episode Philip and Elizabeth complete their next mission – but not without complications – and Philip’s fears about Elizabeth’s readiness for action deepen. Stan tracks the KGB walk-in which leads to much praise at work and a deepening of his attachment to, and dependence on, Nina. Meanwhile, Paige snoops into her mother’s family background and Oleg begins to scrutinize Nina’s secret operation.

Tonight’s episode looks like it is going to be a great episode and you won’t want to miss it, so be sure to tune in for our live coverage of FX’s “The Americans” Season 2 episode 3 at 10 PM EST! While you wait for the recap, check out our sneak peek video of tonight’s episode below!

Tonight’s episode of The Americans starts with a flashback to 1966. Elizabeth is sitting in a park talking to Emmett’s wife about children.  Elizabeth confesses that they haven’t started trying to get pregnant, because she doesn’t really want kids.  Emmett’s wife want Elizabeth to do her a favor.  Suddenly a man pulls up and Emmett’s wife stops talking, she says “there he is.”

Elizabeth gets out of the shower and puts cream on her scar.  Phillip tells her to get dressed, they have to drive to Newport.  Elizabeth doesn’t want to leave the kids, Phillip says the Center is going to “put someone on the kids until they get back.”

Phillip heads downstairs, and Paige and Henry are getting ready for school.  Elizabeth comes down and tells Paige they may be a little late from work and she has to look after her brother after school.

Stan is getting ready for work, his wife gets him coffee.  He notices she is dressed and she says she has a seminar, “it’s supposed to transform her life.”  She gets ready to leave and Stan tells her to have fun.  She reminds him “it’s not fun, it’s work on herself.”

While they are getting on the bus Paige tells Henry she is going shopping with a few girls after school.  He promises not to tell their parents that she is leaving him home alone.

Flashback 1967 – Elizabeth tells Phillip she is “ready,” and then tells him he is going to “make a good father.”

Elizabeth and Phillip are on the road, Elizabeth tells him that Emmett and Leann’s son Jared has been taking in by a family, friends of theirs who plan to look out for him after they were murdered.  Elizabeth asks Phillip who is supposed to take care of the kids if something happens to them, they don’t have any family friends.

Meanwhile Paige is on a bus travelling out of town.  She meets a teen girl on the bus, she is headed to visit her Dad.  Paige tells her she is going to see her Aunt, and plans to surprise her.  Her new friend gives Paige her phone number before Paige gets off the bus.

Phillip and Elizabeth head undercover into the mill and pretend to be with the moving company.  She tells a worker she is looking for the C&C, but he says it has been moved to Annapolis.  He tells her the blades are still on site, and she asks him to lead her to them. Phillip takes a piece of paper that was taped to the blade.

Paige arrives as at a house and rings the doorbell, no one answers, so she lets herself in.  She calls out for her Aunt Helen, but no one answers.  Helen appears and tells Paige she has made her bed for her, and calls her Shelly, Paige is confused.  She tells Helen her name isn’t “Shelly,” and explains she is “Elizabeth’s daughter.”  Helen is confused.

Stan is investigating Bruce Dameron, the KGB’s newest spy.  He heads to his office, and finds out he called in sick, so he snoops around his desk.  Bruce’s boss says that he may be at the Marquis Hotel for a World Bank Event with bankers from all over the world.  Stan tells Bruce’s boss to call 911 and tell them to go to the hotel, and then runs out of the building and down the street. Stan runs upstairs to the roof of the hotel, and sees Bruce with a sniper rifle.  He pulls out his gun and tells Bruce he is from the FBI and to drop his gun.  Bruce refuses to put down the gun, he tells Stan that when he was in Vietnam he learned that the “real enemy” are the people that “own everything.”  Bruce screams “Ronald Reagan doesn’t care” and tries to shoot Stan, Stan shoots him first and kills him.

Flashback – Leann and Elizabeth are in the bathroom washing their hands, she says that she wrote her son Jarrod a letter about what she and Emmett really do and who they really are.  Elizabeth promises if anything ever happens to them she will give the letter to their son Jarrod.

Elizabeth drops Phillip off at the train station and heads to Leann and Emmett’s house.  She heads straight upstairs to the closet, where she knows the letter is hidden.  She pulls out a lockbox and the letter is exactly where Leann told her it would be.

Phillip arrives home, and Henry is waiting for him.  Henry wants to go star-watching at night.  He tells his Dad that Paige went back to school to try out for a club.  Phillip receives a phone call from Aunt Helen, she says she just wanted to let him know that Paige paid her a visit but she is on her way home.

Elizabeth arrives at Jarrod’s new home, and talks to the woman that brought him in.  She tells her she is an agent from child protective services, just checking up on him.

Paige arrives home, and tells her Dad she was trying out for the debate club.  Phillip tells her to sit down and tells her “lying will not be tolerated.”  He tells Paige that Aunt Helen called and thinks her daughter that died in 1974 came to visit her.  Paige explains that Helen is their only living relative and she wanted to meet her.  Phillip snaps on her and says that his Dad died when he was six, she is lucky to have the family that she does have.

Nina is typing up her recent notes about her and Stan, Oleg wants her to go to a hockey game with him, but she declines.  He leave her the ticket anyways.

Elizabeth sits down alone to talk to Jarrod.  Elizabeth tells Jarrod he is entitled to a “leave of absence” form school, and no one expects him to go.  She warns him that healing is going to be a process and takes time.

Nina takes her notes to Arkady and points out that Stan has told her that he loves her.

Paige locks herself in her room and calls her friend Kelly that she met on the bus.  She asks Kelly if she wants to hang out.

Elizabeth leaves Jarrod, and has a flashback of when Paige was a newborn baby.  Meanwhile, Paige is sneaking out of her parent’s house to go meet her friend Kelly.  Phillip doesn’t notice because he is in the basement deciphering the codes they got from the mill.  Elizabeth pulls over and lights the letter Leann wanted her to give to Jarrod on fire, she realized the last thing he needs to know was that his parents were spies and prepared to die for what they believe in and leave him all alone.